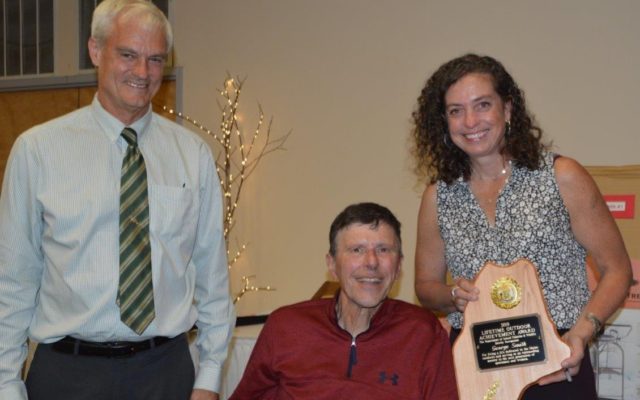 Contributed • February 16, 2021
By John Holyoke Bangor Daily News Staff When I began writing outdoors columns for the Bangor Daily News 19 years ago, I reached out to a lot of people in an effort to more fully understand the job I’d be expected to do. Among the questions I asked: Who should I make sure I get to know? Who can I trust? And who should I watch out for? One very knowledgeable person in the Maine outdoors community gave me the same answer to all three questions: George Smith.

When I began writing outdoors columns for the Bangor Daily News 19 years ago, I reached out to a lot of people in an effort to more fully understand the job I’d be expected to do.

Among the questions I asked: Who should I make sure I get to know? Who can I trust? And who should I watch out for?

One very knowledgeable person in the Maine outdoors community gave me the same answer to all three questions: George Smith.

Smith, who died Feb. 12 after a four-year battle with ALS, was the executive director of the Sportsman’s Alliance of Maine at the time. He was a longtime lobbyist and perhaps the most powerful outdoorsman in the state at the time.

“You have to get to know George, because you’ll be writing about SAM a lot,” my adviser told me. “And sometimes, you trust him. If you understand one thing: He’s not your friend. He’s always working for SAM’s members, and if you come out against legislation he thinks is important, you’ll swear he’s your enemy.”

That, in a nutshell, was the George Smith that I got to know over the next decade or so. He always had an angle, a legislative bill, or an initiative that he was trying to push. Sometimes, I agreed with him. Other times, I didn’t. And though he sometimes took issue with a column I’d written, Smith always had a smile on his face when he was giving me hell.

A secret I’ve not shared: When I first became the BDN’s outdoors columnist, following legends like Bud Leavitt and Tom Hennessey, Smith reached out to me to appear on his TV show, “Wildfire.”

My editor at the time suggested — demanded, really — that I decline the invitation for a year or two, fearing Smith might have something up his sleeve, and might try to prove how little I really knew. Seething inside, I did as I was told. Some time later, I did appear on the show, with permission from my boss. We needn’t have worried: Although Smith asked tough questions, he was a gracious host who simply wanted to produce a good show that day.

I hope we did.

Smith was a tenacious lobbyist, even when he knew the cause he was promoting had little chance of success. The sportsman’s alliance membership pointed him in the direction they wanted him to go, and like a bulldog, he dug his teeth into whatever issue needed attention, and tried to convince lawmakers to agree with his bill.

Case-in-point: Sunday hunting. Each year, he would introduce legislation that would allow Mainers to hunt on Sundays. He knew that the state’s large landowner groups didn’t agree, and that there was no way his bill would succeed. Still, each year, another Sunday hunting bill would be on the docket, and Smith would be in Augusta trying to convince lawmakers that it made good sense. Why did he keep banging his head against such a clear legislative wall?

His members wanted him to.

Although I didn’t see Smith very frequently, I found myself enjoying our short visits together, when he’d tell me what the Sportsman’s Alliance of Maine was up to, and ask me if I’d finally shot my first deer.

Smith always followed that up with another invitation. “I’ve got plenty of deer on my woodlot,” he’d tell me. “When you decide you finally want to fill your tag, give me a call. I’ll take you out.”

I never called. We never hunted together. Today, I regret that more than I thought I would.

And then, three years ago, he came to Bangor at my request to talk about his illness. He’d just written a piece for the Kennebec Journal and Waterville Morning Sentinel that outlined his health struggles, which he’d largely kept under wraps for the previous 14 months.

The Smith I saw that day was different than the one I’d known before. He was quieter. He listened more, talked less. His health was already failing, he told me. He couldn’t fly fish any more, and his outdoor enjoyment was coming through living vicariously through the adventures of others.

And as we wrapped up our chat, I learned that Smith had a few regrets. All those hours, and all that work he did for Maine’s outdoors enthusiasts had taken a toll, you see. And he wasn’t sure he’d make all of the same decisions again, if given the chance. Spending time with family, for him, had taken top billing. And it hadn’t always been that way.

“Take another look at your priorities and your busy lives, and even write down, ‘What is most important?'” he told me that day. “Then, do more of that. That’s the only message I can give people, really. Because I think that’s the most important conclusion.”

Holyoke can be reached at jholyoke@bangordailynews.com or 207-990-8214. Follow him on Twitter: @JohnHolyoke. His first book, “Evergreens,” a collection of his favorite BDN columns and features, is published by Islandport Press and is available wherever books are sold.