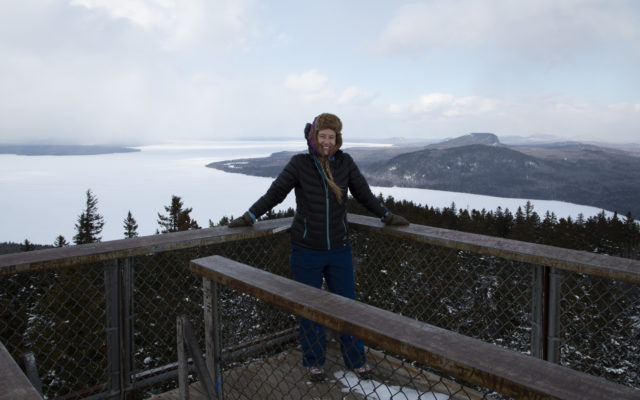 Contributed • February 14, 2021
By Aislinn Sarnacki, Bangor Daily News Staff Difficulty: Strenuous. The climb to the summit of Mount Kineo is steep and rocky, especially on the popular Indian Trail, which is the quickest way to the top.

Difficulty: Strenuous. The climb to the summit of Mount Kineo is steep and rocky, especially on the popular Indian Trail, which is the quickest way to the top. However, connecting trails that circle around the mountain, along the shore of Moosehead Lake, offer an easier hike.

Information: Rising above Moosehead Lake on an isolated peninsula, Mount Kineo is one of the most distinctive landmarks in the region — and one of the most famous mountains in Maine. Accessible by water only, it is the central feature of Mount Kineo State Park.

Mount Kineo is especially striking because it’s surrounded by water and features cliffs that rise 700 feet above the lake’s surface. A hiking trail traces the top of some of these cliffs, leading to stunning views of the Moosehead Lake — which is Maine’s largest body of fresh water — and mountains beyond. In addition, trails lead to the summit of the mountain (1,789 feet above sea level), where a large observation tower reaches above the forest to offer an open 360-degree view of the region.

The park features about 6 miles of hiking trails. Starting at the park entrance near the boat landing on the south side of the peninsula, the 2.2-mile Carriage Trail traces the shore around the west side of the peninsula to Hardscrabble Point, where there are primitive campsites. Along the way, it follows the bottom of some dramatic cliffs, which are made of rhyolite.

Rhyolite is a volcanic rock that’s rich in silica and formed at or very near the earth’s surface from cooling magma, according to a report on the geology of Mount Kineo State Park by the Maine Geological Survey. The high silica content in the rock makes it break apart in a unique way, which makes it easier to shape. For this reason, indigenous Wabanaki people in the area used Kineo rhyolite to create arrowheads and tools.

The 0.5-mile Indian Trail is steep and travels along the top of the cliffs, offering stunning views along the way. The Bridle Trail is a bit more gradual and travels through the forest, intersecting with the Indian Trail in about 0.6 mile. From there, the Bridle Trail continues 0.4 mile to the summit observation tower, which is actually an old fire observation tower that was converted into a viewing platform for recreationists. Made of steel with sturdy railings and a wood deck, it stands 64 feet tall, according to records shared online by the Maine Chapter of the Forest Fire Lookout Association.

From the tower, depending on the cloud cover and clarity of the day, you can see several significant mountains including Big Moose, Blue Ridge, Shaw, Little Kineo, Big Spencer, Little Spencer and Lobster mountains. You can also spot islands in the lake, including Sugar Island and Farm Island, which are both state-owned.

The final trail in the Mount Kineo State Park trail network is the 2.2-mile North Trail, which spans from the summit to Hardscrabble Point. From the summit, the trail descends fairly steeply and leads to a viewpoint on the east side of the peninsula. It then traces the shore around the east and north side of the peninsula to end at Hardscrabble Point.

While hiking in the park, notice the variety of tall trees, including white, gray and yellow birches, red pines, eastern hemlocks and balsam fir. Stay on trail. The mountain provides habitat for rare plants and peregrine falcons.

Mount Kineo State Park is open year round from 9 a.m. to sunset daily, unless otherwise posted at the entrance. Dogs are permitted but must be leashed. Park admission varies from free to $4 depending on your age and residency. Bring cash to leave in the iron collection box at the trailhead. For more information, including the breakdown of admission fees, visit maine.gov/mountkineo or call 207-941-4014.

How to get there: Mount Kineo State Park can only be accessed by water (or, in the winter, ice), with the nearest public boat launch sites at Rockwood and at Lily Bay State Park. A commercial boat shuttle to Mount Kineo leaves routinely from Rockwood Town Landing in summer months. The crossing takes approximately 10 minutes and costs $13 for ages 5 and older, with children under the age of 5 traveling for free. Dogs also travel for free.

To get there from the center of downtown Greenville, turn onto Pritham Avenue (Route 6 and Route 15) and follow it for 19.3 miles, around the west side of Moosehead Lake, to Rockwood. Turn right onto Village Road and the parking lot for the Rockwood Town Landing will be on your right in about 0.3 mile.

In the winter, hikers often ski or walk to Kineo on the frozen surface of Moosehead Lake, starting at the Rockwood Town Landing. A snowmobile trail marked with stakes runs from the landing to Kineo if the ice is strong enough to hold vehicles. (Do not cross the lake unless this trail is marked.) The walk is just under a mile long.

Personal note: A few years ago, I interviewed some ice climbers about their adventures, and they mentioned Mount Kineo as a winter destination. Since then, I’ve been itching to hike the mountain in the winter (I already had in the summer). But it wasn’t until this year that I timed it right and made it happen.

First we had to make sure the ice was safe, so I messaged my cousin Aaron, who lives in the Moosehead area and is always zipping around on his snowmobile. He let me know that the snowmobile trail leading across to Kineo was staked and being used.

Looking at the weather forecast, my husband Derek and I prepared for temperatures in the teens and a wind chill of as low as zero. Rabbit fur hat? Check. Snow pants, long johns, down jackets, extra mittens, heat packs? Check. We also needed snowshoes, poles and, of course, the typical winter hiking gear.

With wind whipping fluffy snow across our path, the trek across Moosehead Lake made me feel like we were explorers in the Arctic tundra. We encountered no other hikers that day, but we did wave to some snowmobilers and ice fishermen.

The weather continually shifted around us. One minute we were bathed in sun with blue skies overhead, and the next we were enjoying a snow flurry. I was a little nervous about climbing the tower at the top, but the views were well worth the mental effort.

Our snowshoes were lifesavers. Not only did they prevent us from drowning in snow drifts, they also allowed us to gain purchase on steep sections of the Indian Trail. For the descent, we followed the Bridle Trail. The entire hike took us about 4 hours and totalled 6.3 miles with an elevation gain of about 1,000 feet.

Sarnacki can be reached at asarnacki@bangordailynews.com. Follow her on Twitter: @1minhikegirl, and Instagram: @actoutdoors. Her guidebooks “Family Friendly Hikes in Maine,” “Maine Hikes Off the Beaten Path” and “Dog-Friendly Hikes in Maine” are available at local bookstores and wherever books are sold.