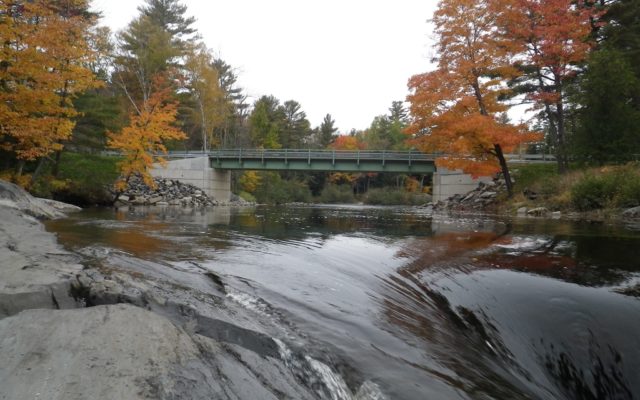 Contributed • February 14, 2021
By Tim Obrey I enjoy working in the woodshop in my spare time. I make all kinds of things: furniture, fish boards, canoe accessories, picture frames and lots of shop projects.

I enjoy working in the woodshop in my spare time. I make all kinds of things: furniture, fish boards, canoe accessories, picture frames and lots of shop projects. It’s nice at the end of the day to dust myself off and have something to show  for my efforts. It’s not always that way with fisheries work. Many of our projects are long-term. I swear some are more  like a marriage: Till death do us part…

One project that required several years to see the  fruits of our labor involved the passage of wild salmon  at Earley’s Falls on Wilson Stream in Willimantic. In the early 1990s, we began to take a closer look at the salmon fishery at Sebec Lake. The lake had a reputation for smaller salmon but also grew some monster lake trout. I’ve seen a handful in the 25-pound range. Overall, the salmon were on the thinner side, but there were some decent fish too.

We began  by surveying all of the tributaries to Sebec Lake. This included habitat surveys and electrofishing. Now,  electrofishing is just what it sounds like. We run a  current of electricity through the water which temporarily stuns the nearby fish. This is where I throw in the obligatory “Don’t try this at home.” We are able to scoop them up with dip nets and can use a mark and recapture technique to generate a population estimate. We marched up and down Ship Pond Stream, Wilson  Stream and all of the smaller tributaries to Sebec Lake. We were able to determine that most of the wild salmon  reproduction was located in Wilson Stream from Earley’s Falls to Tobey Falls. Tobey Falls is impassable to salmon most,  if not all, of the time. There is a 4-foot vertical drop at Earley’s Falls which presents a serious challenge to salmon and it  is located at the confluence with Sebec Lake. All of the salmon spawning and nursery habitat is above Earley’s Falls. If  the salmon don’t make it over this set of falls, they will not be able to spawn. Game over.

It became apparent early in the project that salmon were having difficulty passing Earley’s Falls. I would sit for hours at  the falls watching salmon jump into the rush of water dropping over the massive ledges. I never saw a salmon jump  over the falls. Not one. They would leap from the water pooled below the falls, but as soon as they touched the fast moving water, they were pushed back into the lake. It was clear none of these fish were ever going to jump over this  impasse. Then, one evening, I moved upstream of the falls after watching them jump futilely. I saw a salmon upstream  of the falls, resting in a crevice in the ledge. This fish had passed upstream, but how? I sat and watched and  miraculously, another magically appeared. It popped up from nowhere. I moved in closer and I saw a salmon actually  swim up the vertical flume of water in the center of the falls. It fought to make the last push up and over the ledge. I  actually saw the coloration of the fish change as it struggled. It only took a few seconds, but this salmon made it up and  over. It never broke the surface of the rushing, frothing water. It had managed to stay in that flume the entire time. It  must have felt like it was swimming to the moon, straight up. The fish immediately sunk down into one of the many  deep crevices in the ledge and rested. The salmon stayed there with its buddies for over 30 minutes to recover, then  they slowly made their way upstream together.

This was very eye-opening. It was an awesome, yet bitter-sweet demonstration of what happens in the wild. Clearly,  many of the adult salmon coming into the falls to make their spawning run meet a brutal fate. Most will never  successfully negotiate the falls. Those that do, will go on to spawn and hopefully complete the life cycle, but it’s a  difficult journey and there will be high mortality rates even for those few successful fish.

We have worked diligently to improve conditions for the salmon. Of course, the first option would be to install some  type of fish ladder at the site. But for various reasons, that is not an option. So, we began to look at manipulating stream  flows and the lake level in Sebec to improve successful passage at the falls. We learned early on that a significant rain  event in September can be a disaster. There is a dam upstream on Wilson Pond, but much of this streams’ s drainage  area is untamed. Heavy rain creates prolonged high flows in this enormous drainage. Salmon are not able to swim up  over the ledge falls in these flows. We had set up flow stations in Wilson Stream during the project, so we were able to  compare fish passage with estimated flows in the stream to determine the best conditions. We were able to document  several years of little to no successful reproduction in Wilson Stream using our electrofishing gear. That’s scary. The lack of fish was the result of high flows in the fall combined with a September drawdown in Sebec Lake, which was standard at the time.

We worked with the hydro operators at Wilson Pond, upstream of the falls, and the hydro operators at the outlet of  Sebec Lake. The goal was to keep Sebec Lake nearly full during September which would decrease the distance the fish  had to swim vertically, and a full lake kept a large ledge in the gut of the falls underwater which created yet another  obstacle for the salmon. At the same time, we needed to get fish over the falls before significant rain events occurred in  the fall.

The salmon run at Wilson Stream is a little unique. The salmon will move early in September, compared to  other wild salmon runs like the Roach River where they typically come into the river in late September and in October.  That’s a good thing because early September is usually drier. So, our stream management strategy is to release a burst  of water from Wilson Pond in Greenville soon after Labor Day to create an attraction flow. This usually lasts for a week. The salmon in the lake can sense the increase in flow, pack their bags, and head for the stream to begin their annual spawning journey. When we determine there are good numbers of salmon below the falls, we ask the dam operator to cut the flow back to a minimum. This reduces the turbulence in the falls and makes it easier for salmon to pass upstream.

On a good year, we can pull this off twice before the rains come. There is still a high mortality for salmon. They don’t all make it. But it’s the best we can do. It’s likely that one of the reasons Sebec Lake is noted for smaller  salmon is because the vast majority of these adult fish will perish on their first spawning run. Most salmon at Sebec  Lake mature around 14 to 16 inches and many never see a second year of spawning in Wilson Stream. We spend a lot of  time at the falls documenting the fish movement. It’s a bit of a balancing act sometimes. The camp owners at Wilson Pond would prefer not to have the water pulled down too far in September since many seasonal camps have become year round residences. But we do need the water for the salmon and a fall drawdown protects overwintering wild lake trout  eggs. At the same time, the camp owners at Sebec Lake don’t want the lake too high in case a hurricane or heavy rains  come through, which can cause shore erosion. All understandable, all things to consider and balance with the  management of one of Maine’s original native landlocked salmon waters. We want to thank the folks at Kruger Energy (Wilson Pond Dam operators) and Dichotomy Sebec Lake Hydro (Sebec Lake Dam operators) for their cooperation.

This year we were able to use our underwater drone to help evaluate the arrival of salmon at the falls and upstream  passage. I’ve posted some related videos here:  https://youtu.be/ymx3S2QMouc and https://youtu.be/T9czRGAsa8g.

Obrey is the fisheries resource supervisor for the Moosehead Lake region.