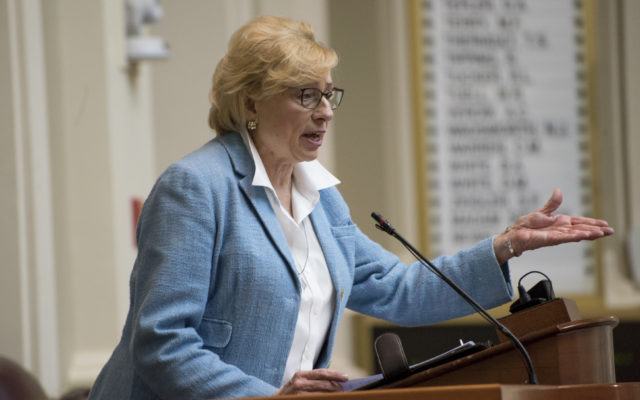 Papers were filed on Thursday to initiate a recall of Commissioner Brian Ames of Lewiston, according to the Lewiston Sun Journal. None have been filed yet for Commissioners Isaiah Lary of Wales or John Michael of Auburn, but they are expected.

Lary, who has not worn a mask at commission meetings, introduced the resolution last week. That resolution challenged the constitutionality of the face covering mandate and called for county residents and visitors to decide for themselves whether to mask up.

The resolution stated that the governor’s executive orders “restrict the liberty of Maine citizens to dress, work, exercise their religion, assemble, shop and conduct lives as they choose.”

On Wednesday, commissioners voted 4-3 to table the resolution for two weeks to consider alternatives, prompting some of those who attended the meeting to call them “cowards” and cry “shame.”

Kiernan Majerus-Collins, a spokesperson for the group leading the recall effort and a member of the county’s budget committee and the Lewiston school committee, criticized the three commissioners for turning pandemic restrictions into “a political game.”

“People are outraged, and we intend to hold these commissioners accountable,” Majerus-Collins told the Sun Journal.

If the recall papers are certified by the county administrator, petitioners will have 90 days to collect about 710 signatures, according to the newspaper.

The commission has no authority to override an order from the governor, but Lary said he intends to fight the face covering mandate in court.

After their vote to table the resolution, Maine Attorney General Aaron Frey sent a letter to the commissioners, as well as the Piscataquis County commissioners who have adopted an anti-mask resolution, defending the constitutionality of the order and telling them they and anyone who attends meetings are required to wear masks.