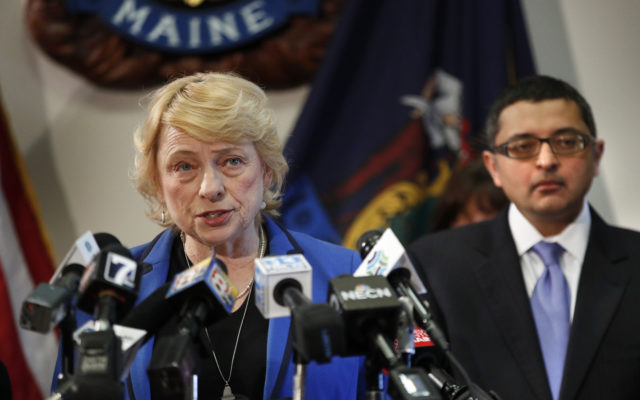 The resolution, if passed, would violate Gov. Janet Mills’ executive order that requires all Maine residents to wear a mask in indoor public spaces to help curb the spread of the coronavirus.

In a 4-3 vote, commissioners voted to table the resolution for two weeks so they could consider alternative resolutions, the Lewiston Sun Journal reported.

However, many residents were opposed to the vote to the delay shouting “cowards” and “shame” at the commissioners saying that the mandate affects the mental health of children and the elderly, violates their rights and kills the economy, the Sun Journal reported.

Introduced by Commissioner Isaiah Lary of Wales, the resolution states that Mill’s executive orders “restrict the liberty of Maine citizens to dress, work, exercise their religion, assemble, shop and conduct lives as they choose.”

At the Wednesday meeting, Lary questioned Mills’ constitutional authority to set such a mandate, citing the nondelegation doctrine that says, “the legislative branch may not cede its powers to make laws to the executive branch,” the Sun Journal reported.

Lary claimed that “the big tech media and the mainstream media” are censoring science questioning the effectiveness of face coverings, according to the Sun Journal.

However, the use of masks or cloth face coverings has been shown to control the spread of the virus, and the U.S Centers for Disease Control and Prevention has advocated the widespread use of masks since July.

Commissioners Noel Madore of Lewiston and John Michael of Auburn questioned the group’s power to restrict the mask mandate because counties don’t have authority to set laws. Michael proposed another resolution that is based on “all scientific research and not merely CDC guidelines that may be political,” the Sun Journal reported.

The commissioners then voted to delay the decision until they can deliberate on the competing resolutions.