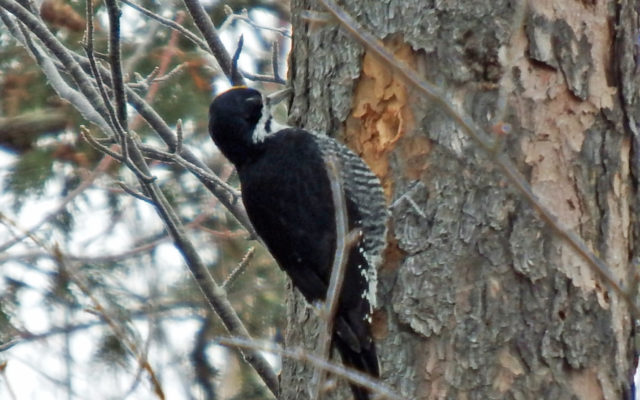 Contributed • January 14, 2021
By Bob Duchesne First, a private message to the owners of a home on Guilford Center Road in Guilford: What on earth do you have in those bird feeders? I counted at least 60 American goldfinches and 30 common redpolls mobbing the feeders on the edge of your driveway last weekend. What a frenzy! It was like watching a school of piranhas devour a cow.

First, a private message to the owners of a home on Guilford Center Road in Guilford: What on earth do you have in those bird feeders? I counted at least 60 American goldfinches and 30 common redpolls mobbing the feeders on the edge of your driveway last weekend. What a frenzy! It was like watching a school of piranhas devour a cow.

Guilford is not one of the places I typically go birding, but duty called. I’ve been roaming lately, exploring as a volunteer for the Maine Bird Atlas, a five-year project directed by the Maine Department of Inland Fisheries and Wildlife. The initiative primarily seeks to map the summer range of Maine’s breeding birds, but there is a winter component. Winter surveys will help ornithologists determine how Maine’s year-round resident species and winter visitors use the state. Atlas data may indicate what habitat resources are important, what factors influence annual variability and whether the winter range of birds is changing as much as the summer ranges are over time.

I’ve seen a lot this winter, but I’m not sure I’ve learned a lot. Two weekends ago, I walked several miles along the Greenfield Road northeast of Milford. I thought the number of resident birds was rather slim, but I enjoyed multiple flocks of visiting pine grosbeaks, evening grosbeaks and common redpolls. A fruit tree on the corner yielded six cedar waxwings.

Then, last Saturday, I walked various parts of north Guilford. Again, I thought the number of year-round birds was low, but that feeder frenzy made the trip worthwhile. Sunday, I walked the outer portion of County Road in Milford. It’s a residential area, and perhaps the presence of bird feeders accounted for the large number of chickadees (70) and nuthatches (35) over the three-mile stretch. So far, I’ve seen surprisingly few crows. I’m wondering if many crows vacate the Maine woods in winter and congregate in towns, such as the big flock that roosts in Bangor most evenings. (Note to self for a future column: “Do winter crows flee the woods, or is this just another harebrained hypothesis Bob came up with?”)

As I write this, it is now Monday afternoon and I’m sitting in my camper in the Chamberlain Lake parking lot, adjacent to the Allagash Wilderness Waterway. I left home at 4 a.m. to get here by sunrise, hoping to completely survey an atlas block before lunch. After five hours of birding and seven miles of walking, I’m hungry enough to fight off those piranhas for the cow. I’ll finish another block tomorrow morning.

As you can see, winter volunteers for the Maine Bird Atlas may choose from a variety of experiences. Many just report what comes to their feeders. The entire state is divided into three-mile blocks. A block is complete when surveyed for at least three hours in the first half of winter, and three hours in the second half. Volunteers just do as much as they can, and keep track of every bird they can identify. I chose the Guilford route because I discovered that the second half was already completed last year, and I could finish the block with just one visit.

Winter atlas surveys don’t require a lot of skill, since most of the birds are common and easy to recognize. If you know what a chickadee sounds like, you can identify most of what you hear by ear. Then, it’s just a matter of knowing the difference between a hairy and a downy woodpecker, and maybe a red-breasted and white-breasted nuthatch. You can find all the information about the Maine Bird Atlas on the Maine DIF&W website.

Most people also think eastern bluebirds aren’t in Maine in winter, but 249 were reported for the Biddeford-Kennebunkport Christmas bird count. At the end of the five-year winter atlas project, we should have a much better map of which birds are where throughout the state. I plan to add a little more to that knowledge base in the North Maine Woods this afternoon, just as soon as my toes thaw out.

Duchesne serves as vice president of Maine Audubon’s Penobscot Valley Chapter. He developed the Maine Birding Trail, with information at mainebirdingtrail.com. He can be reached at duchesne@midmaine.com.