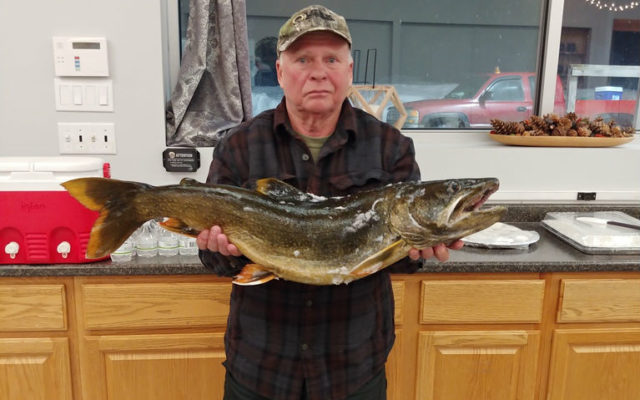 Contributed • January 13, 2021
By John Holyoke, Bangor Daily News Outdoors Editor In years when the weather is finicky, the state’s largest lake — Moosehead — can take its sweet time making ice that’s safe enough to travel on. That’s the case this year, and organizers of the 14th annual Moosehead Lake Togue Derby with Ricky Craven have opted to add a second weekend to the popular event because of that uncertainty.

In years when the weather is finicky, the state’s largest lake — Moosehead — can take its sweet time making ice that’s safe enough to travel on. That’s the case this year, and organizers of the 14th annual Moosehead Lake Togue Derby with Ricky Craven have opted to add a second weekend to the popular event because of that uncertainty.

“The derby is still on, but we are making some adjustments,” the Natural Resource Education Center said in a release. “Sometimes, you just have to roll with the punches.”

Originally, the derby was scheduled for Jan. 29 to Jan. 31. Anglers will still be allowed to fish that weekend, ice permitting, and enter fish in the derby. But organizers have added a second week to the derby — Feb. 19 to Feb. 21 — and awards won’t be handed out until after the second three-day session is staged.

The winter weather up around Greenville is usually pretty cold, and safe ice can usually be found by late January. But the derby organizers always keep a close eye on conditions and make changes if needed.

“We had similar ice conditions back in 2015 so we are dusting off the playbook [from that year] for a winning derby,” the NREC said. “It’s all one derby, just with two weekends open to catching and registering fish.”

The NREC explained that many anglers have already made camp reservations on Moosehead for the traditional derby weekend, and if those anglers are able to find safe ice, the weigh-in stations will be open for registering fish.

But the derby leaderboard will be “paused” Jan. 31 at 4 p.m., and will open again on Feb. 19 for the second wave of anglers, when organizers expect there to be plenty of fresh ice.

The derby has been credited with helping rejuvenate the lake’s population lake trout (often called “togue”) by removing thousands of smaller fish and reducing the demand for the limited supply of forage fish that those togue eat.

Moosehead produces some large togue, including a 2009 behemoth that came close to breaking the state record for the species. That fish wasn’t caught during the derby, but weighed in at nearly 30 pounds.

Ice conditions around the state are less-than-ideal, as the first real cold snap was followed by snow that insulated the ice that had formed and kept it from getting much thicker. Not many parts of the state have experienced sub-zero temperatures that would help lakes and ponds form thick ice, and this weekend’s forecast calls for warm weather and rain that will further deteriorate the ice in many spots.

Social media posts this week have shown plenty of Mainers enjoying days on ice close to the shore of some lakes, but a video of Beech Hill Pond in Otis earlier this week showed open water and whitecaps from shore to shore.

Participants who plan to fish the Moosehead derby can fish both weekends by purchasing one ticket. All door prizes and biggest fish prizes will be awarded after February’s derby weekend.

Due to COVID-19 concerns, there will be no derby banquet this year.

More information is available at the derby’s Facebook event page.

If you have fishing derby updates, information or results to pass along, send it to jholyoke@bangordailynews.com