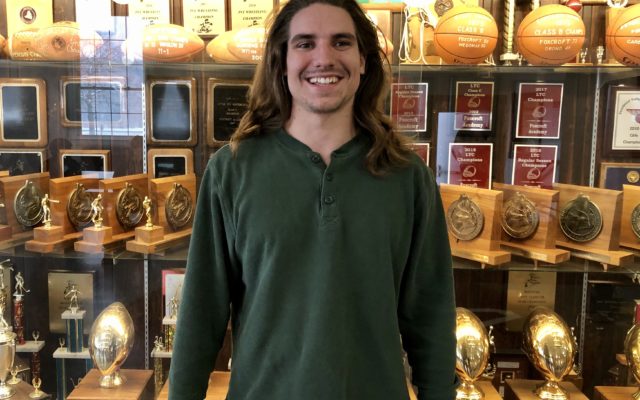 Law replaces Luis Ayala, who retired after the 2020 season. Ayala guided the Ponies to a 368-51 record and six state championships during his 18 years as head coach.

“I’m excited to take over this program and carry on the tradition of excellence that coach Ayala brought to Foxcroft wrestling,” said Law, a 2015 Foxcroft Academy graduate. “I have known him since I started wrestling in the fourth grade, and there can be no better person to have as a mentor. I just want to keep this program moving in the right direction with a great group of kids.”

When the Ponies then moved up to Class B, Law placed second in the 138-pound division of the 2014 state championships and was fourth at 152 pounds as a senior. He finished his career with a school-record 188 career victories.

He also has served as Foxcroft’s junior varsity baseball coach for the last two years.

“We are happy to have Brooks take over the program and continue the legacy that coach Ayala built over the last 20 years,” Foxcroft Academy athletic administrator Jaclyn Tourtelotte said. “This may be his first varsity coaching job, but after working with the youth and high school programs over several years, he brings plenty of mat experience and knowledge to the position. He’s ready to go.

“The big part is Brooks knows wrestling. It’s in his blood, and Foxcroft Academy wrestling is in his blood and he’s excited to have the opportunity to continue in the program with us.”

Law takes over a team that has been one of the school’s athletic staples for the last quarter-century. In addition to the six state championships won under Ayala, most recently the 2016 Class B crown, the Ponies have earned 12 regional titles and 14 conference championships.

Law is among 10 Foxcroft wrestlers who scored at least 150 career victories during that span.

“I believe we have what it takes to keep us in the hunt every year, both as a team and as individuals,” he said. “No matter what happens this year, we will work hard and get better with every practice together.”

If or when the 2020-2021 wrestling season will begin remains uncertain due to COVID-19 restrictions. High school wrestling has been labeled a higher-risk sport under the state’s community sports guidelines as well as by Maine Principals’ Association. Formal preseason practices have been postponed since their traditional late-November starting date.

Wrestling tentatively is scheduled for a season that will run from late February through mid-April. Teams are able to hold conditioning workouts.

“We don’t know what the season will look like, but we have the chance to build on endurance and conditioning right now, two must-haves when it comes to wrestling,” said Law, who met with his team Tuesday morning. “I’m also pleased with the team’s makeup as we have a mix of veteran leadership and young talent that should help us as we move forward.”