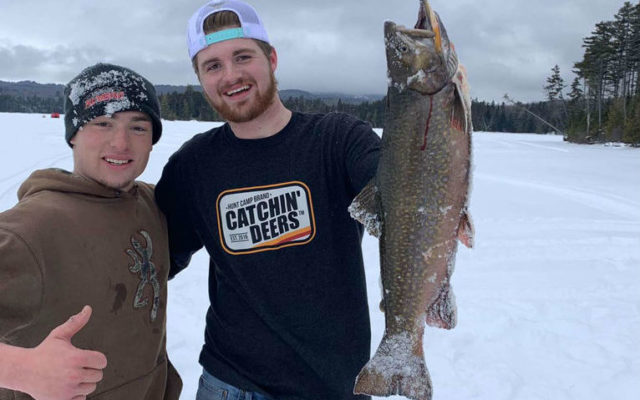 The Maine animal stories that you loved the most in 2020

Contributed • January 2, 2021
By John Holyoke, Bangor Daily News Outdoors Editor This year has been a challenging one for all of us, but 2020 has been a good one for our animal stories. Perhaps the fact that many of us have essentially been confined to our homes for nine months has led to a lot of web browsing, and a quest by some to find something to smile about.

This year has been a challenging one for all of us, but 2020 has been a good one for our animal stories. Perhaps the fact that many of us have essentially been confined to our homes for nine months has led to a lot of web browsing, and a quest by some to find something to smile about.

We hope our animal stories have provided that respite from the pandemic for many of you. Here are our most popular from that genre, including tales from land, sea and lakes across Maine.

Did we mention that readers love mountain lion stories? Well, the trail camera photo that Nolan Raymond captured in Bucksport certainly raised a few eyebrows. Take another look, and tell us what you think.

Teens and a tuna

On July 1, three teens headed out onto the ocean in a boat named — appropriately — Fat 2na. They ended up with a tale worthy of a Hemingway novel. Call it “The Young Men and the Sea,” if you choose. The trio ended up battling a 700-pound bluefin tuna for seven hours before landing it. And to paraphrase another classic, in order to haul it back ashore, they needed a bigger boat.

If you were asked to take sides in a battle between a bald eagle and a loon, you might think the eagle would hold the upper hand … or talon. In an odd May episode, that wasn’t the case, as a state biologist learned that a dead eagle hadn’t been shot, as she had feared. Instead, it had been killed by a well-placed peck by a loon’s sharp bill.

Martina Drugovich of Southwest Harbor had never been ice fishing in her life until February, when she went to Mount Desert Island’s Long Pond. Her first day was a good one, as she caught a state record yellow perch that weighed 2.12 pounds.

Maine’s state record lake trout, or togue, was set 62 years ago, and few fish caught after that came close to Hollis Grindle’s 31.5-pounder. In July, angler Erik Poland knocked Grindle’s fish from the record books when he caught a 39.2-pound laker while fishing Lower Richardson Lake. The fish was 44 inches long.

The great thing about trail cameras is that you’re likely to end up with photos you’d never capture if you’d been standing in the woods waiting for action. Bangor Daily News reader Bob Hall’s super-cool photo of an unsuspecting owl swooping down to attack a skunk certainly fits into that category, and thousands of you took the time to click on the story and share it with your friends.

Across the state, Mainers were shocked to see monstrous silky webs covering tree branches. Those with arachnophobia needn’t have lost any sleep, though. The webs were not built by spiders at all. The fall webworm, which does not pose any harm to humans nor trees, was the culprit.

Up on Maine’s largest lake — Moosehead — anglers have been hauling in some massive brook trout in recent years. In January, Gage Poulin was the lucky fisherman, as he pulled in a brookie that was 23 inches long and weighed 5.6 pounds. “It’s the fish of a lifetime,” Poulin said. No argument here.

Our trail camera feature has generated plenty of photos of deer, moose and bears. More rare have been photos or videos of bobcats. Christopher Almy passed along a video from his Charleston property that showed a pair of bobcats playing. Readers loved it. So did I.

Steve Carey didn’t let a little — or a lot — of rainy weather keep him out of the woods on the last Monday of deer season. He braved the elements, called in a big buck, and when an opportunity for a shot presented itself, he made it count. The buck had a monstrous rack that led to some debate on how many points it actually had. In the end, Carey decided to call it a 17-pointer. I’ll just say, “Wow.”