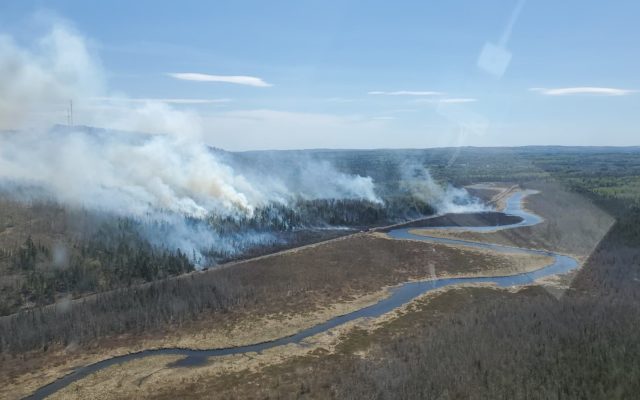 Maine has seen more than 1,000 wildfires this year, driven by drought and pandemic

Contributed • December 10, 2020
By Bill Trotter, Bangor Daily News Staff With three weeks left in 2020, Maine’s annual wildfire total is the highest it has been in the past 35 years. The number of wildfires in the state this year, 1,150, has been aggravated by drought and by more people spending time outside as a way of coping with the COVID-19 pandemic, said Bill Hamilton, Maine’s chief forest ranger.

With three weeks left in 2020, Maine’s annual wildfire total is the highest it has been in the past 35 years.

The number of wildfires in the state this year, 1,150, has been aggravated by drought and by more people spending time outside as a way of coping with the COVID-19 pandemic, said Bill Hamilton, Maine’s chief forest ranger. The number of reported wildfires in Maine in 2020 is the highest annual total since 1985.

The 1,030 acres statewide that burned this year in wildfires is on par with the average in recent years of roughly one acre burned per wildfire, with many of 2020’s fires resulting from campfires that spread or were not properly extinguished, Hamilton said. The number of wildfires caused this year by campfires — 171 — was five times the number of out-of-control campfires that forest rangers responded to last year, he said.

Over the prior four years, from 2016 through 2019, Maine averaged roughly 545 wildfires per year that burned 527 acres statewide. The average over those four years of wildfires caused by campfires was roughly 73 per year.

Hamilton said 296 of this year’s wildfires were caused by intentional debris burns that grew out of control — more than twice the average of 134 each year from 2016 through 2019. The debris burns and the record numbers of campers in Maine this year both are believed to stem from people pursuing home projects and getting outside more to reduce their potential exposure to COVID-19, he said.

This year’s drought is the dominant factor in the spike in wildfires. Since around 2015 or 2016, Hamilton said, he’s noticed a pattern of more dramatic swings in the weather that has exacerbated the threat of wildfires.

Precipitation in Maine is being clustered into tighter time frames in which large amounts are coming down in less time, he said, with multiple rainstorms sometimes occurring within just a few days of each other. Then, there are longer dry spells between the heavy downpours, which make vegetation more prone to burning, he said.

Traditionally, the number of wildfires in the month of June has dipped as Maine’s annual “green out’’ — when leaves fill out on trees and other plants — makes fires less likely to catch and spread. But that lull hasn’t occurred in recent years, Hamilton said.

“We’ve seen in the past few years that’s not really the case,” he said. “We’ve been busy from snow melt to snow fall.”

The total number of 1,030 acres burned in 2020 is the third-highest total since 2000. Exceptionally large wildfires in 2001 and 2006 resulted in annual burned acreage totals for those years that exceeded 2,200 and 1,700 acres, respectively, even though those years had fewer wildfires than this year.

In May 2006, winds blew what had been a controlled burn on blueberry barrens in Centerville in Washington County out of control, resulting in a wildfire that burned 550 acres before it was extinguished. Five years before that, another wildfire in the Washington County town of Addison burned 500 acres.

This year, the largest wildfire in Maine was a 236-acre blaze on May 21 in the Aroostook County town of Island Falls. That same day, another wildfire burned roughly 50 acres and destroyed a cabin and other structures in Baxter State Park.