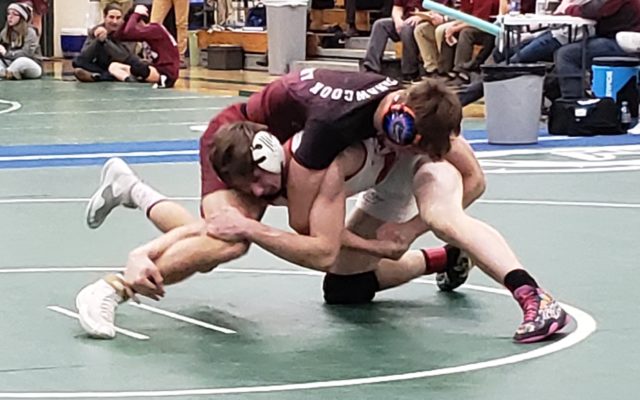 Contributed • November 20, 2020
By Ernie Clark, Bangor Daily News Staff If a high school wrestling season is to be held this winter, it won’t follow its traditional schedule thanks to COVID-19. The Maine Principals’ Association has delayed the start of any possible wrestling season until at least late February 2021 due to its standing as a high-risk activity under the state’s community sports guidelines.

If a high school wrestling season is to be held this winter, it won’t follow its traditional schedule thanks to COVID-19.

The Maine Principals’ Association has delayed the start of any possible wrestling season until at least late February 2021 due to its standing as a high-risk activity under the state’s community sports guidelines.

That status limits participation to team-based practices with physically distanced group activities and no intrasquad competition or matches against other schools.

Wrestling is the only winter sport offered by the MPA that is deemed high risk under state guidelines.

“We knew that if we had to make a decision today, with it being a [high-risk] sport there was no way to have a wrestling season,” MPA Assistant Executive Director Mike Bisson said. “But  instead of just canceling it we postponed it until that ‘tweener’ season in March with the hope that maybe something changes to at least have an opportunity to potentially have a wrestling season.”

That season likely would begin in late February and run until April vacation, depending on COVID-19’s status at the time. That season also may include volleyball, an indoor sport which was not played this fall for coronavirus-related reasons, and Unified basketball, which has been held from January to mid-March each year since its inception.

Tackle football, which as a high-risk sport was canceled this fall in favor of 7-on-7 seven touch or flag play, is being considered instead for a late-spring return. It would run from mid-May to July instead of during the late winter/early spring window.

The decision to postpone the wrestling season came out of a meeting Thursday when the MPA Interscholastic Management Committee also updated and approved, “The School Sports Guidance: Return to Competition for Competitive Activities for Maine” for winter sports.

Wrestling has been considered a challenging sport to hold during the COVID-19 pandemic. Issues include the close proximity between competitors as well as the recent mandate from Gov. Janet Mills’ Nov. 4 executive order that requires participants in all high school sports to wear facemasks at all times during practices and competition, save for swimmers when they are in the water.

“In wrestling it’s very difficult to keep a mask on where the other sports can probably participate with a mask,” Bisson said. “The wrestling kids can barely keep headgear on sometimes, so we know that the mask issue would be a challenge.”

Bisson said the MPA wrestling committee will meet again in January for an update on conditions. That could lead to either moving ahead with the sport or canceling the season.

Winter sports tentatively are scheduled to begin Dec. 7 with so-called “skills and drills” conditioning workouts, with formal team practices in sports other than wrestling set to start Dec. 14 and games to begin no sooner than Jan. 11, 2021.

If played, regular-season schedules are expected to be regionalized against opponents from the same or neighboring counties, as was the case with fall sports. One suggestion is to allow teams to play up to two-thirds of a typical regular-season schedule this winter, which would constitute a maximum of 12 basketball games.

Should any county be designated yellow or red under the state’s county color-coded risk levels, high school teams in those counties cannot conduct practices or games until the county returns to green status.

No spectators would be allowed to attend winter sports contests in order for schools to comply with the state’s mass-gathering limits of 50 people for indoor events and 100 for outdoor activities.

Postseason play in each winter sport likely would be limited to more localized regional pod play during a two-week window in late February and early March rather than the traditional regional tournaments or championship meets.