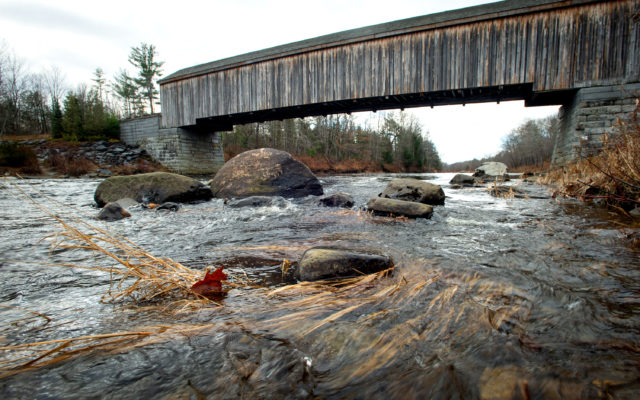 Contributed • November 20, 2020
By Ernie Clark, Bangor Daily News Staff Less than two months after reaching record-low levels, the Piscataquis River is back in the flow. The U.

Less than two months after reaching record-low levels, the Piscataquis River is back in the flow.

The river went on to establish daily date records for low flow throughout the latter half of September, according to Nick Stasulis, chief of hydrologic surveillance for the U.S. Geological Survey’s Maine Water Science Center in Augusta.

More frequent rainfall in early autumn has contributed to the Piscataquis River’s comeback from its nearly barren bottom in September. The northern part of the state and the western mountains up through the Moosehead Lake region derived the most benefit from October’s above-average precipitation.

Rainfall so far in November is averaging 0.5 to 1.5 inches below normal around Maine, according to the National Weather Service’s offices in Caribou and Gray.

“The good news is that even though we are still below normal right now at some gauges, the flows right now are higher normally than they would be in September,” Stasulis said. “So while we’re below normal, the normal range has moved higher so we’re not seeing those critical situations like rivers where you don’t see any water like we had back in September.”

“Certainly the risk to fish and wildlife is less now than it was back in September, but things are still below normal.”

Other parts of the drought-stricken state have not been as fortunate with improving stream flows.

“Southern Maine and the coastal areas missed out on some of that rain so they are still slightly below normal,” Stasulis said. “They’ve gotten little storms here and there but not those extended duration storms to maintain flows.”

Year-to-date rainfall deficits reported by the NWS to the Maine Drought Task Force on Thursday reflect the statewide nature of the shortfall.

Much of York County in southernmost Maine remains in extreme drought, according to the latest U.S. Drought Monitor findings. Coastal areas are categorized in severe drought while far Down East Maine as well as central and western Maine are experiencing moderate drought.

Aroostook County and most of Piscataquis and Penobscot counties are faring best and are identified as abnormally dry by the drought monitor.

Pivotal factors contributing to the current drought not extending into a second year will begin with rainfall in the coming months.

“It seemed in October that we were getting a lot of rain and were starting to get out of the drought and actually had some high flows, but that rain didn’t even get us out of the deficit that we had for this year so we would need more rain this fall,” Stasulis said. “We also have opportunities to recharge groundwater in the wintertime. The last several years we have been getting a January thaw where we get rain. We do actually see recharge in the groundwater from that and we do get some increases in stream flow.”

Another major influence on the state emerging from any lingering drought conditions by next spring will be the winter snow.

“We get a lot of water in Maine from the snowpack in the mountains, and that goes a long way in replenishing stream flows and groundwater in the state,” Stasulis said.