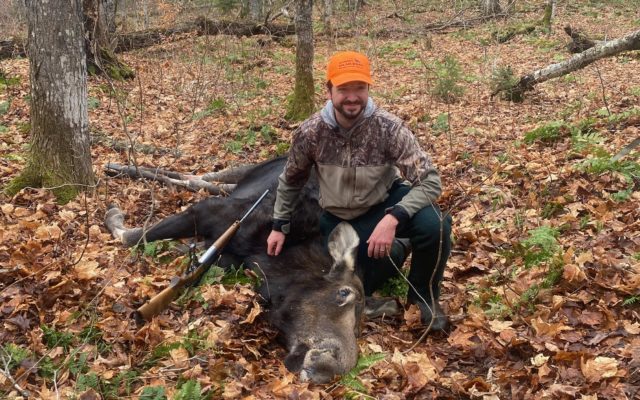 He finally got his chance to hunt a moose, but then he had a COVID scare

Contributed • November 18, 2020
By James Cote When it comes to moose hunting, I’m beginning to think I’m a bad luck charm.  In 2017, after many years of entering the moose lottery, I was fortunate enough to draw a bull moose tag in my favorite Wildlife Management District, WMD 7.

When it comes to moose hunting, I’m beginning to think I’m a bad luck charm.

In 2017, after many years of entering the moose lottery, I was fortunate enough to draw a bull moose tag in my favorite Wildlife Management District, WMD 7. My camp is in this zone, so I was particularly pleased to hunt there. I chose a good friend of mine, Al Martin, to be my subpermittee. The day before the hunt I was pleased to call in a large bull out of a cedar bog, and thought the hunting would be hot. Boy, was I wrong.

We hunted hard the entire week. It turned out that every bull moose in WMD 7 decided not to be vocal starting the first day, Monday, of the hunt. Apparently, they also collectively decided to stay in their bedrooms and not show their faces.

We did see many moose that week, and I had one shot at a small bull, but chose not to take it. We even drove by a party of moose hunters who shot a nice bull at the exact moment we passed them on the road. How depressing.

The long and short of the story is that I went home with a full helping of tag soup. No bull.

Then this past June, Al was drawn for a cow moose hunt in WMD 4, northwest of Moosehead Lake. Out of friendship, but perhaps maybe more out of pity, Al chose me as his subpermittee. I was pleased to oblige.

We arrived at our cabin on Sunday with our crew to meet Al’s father, who had done some scouting for us. I had a pretty bad head cold, but thought fresh air would do me well. We sighted in our rifles and drove to a couple of the spots that Al’s father had picked out. On the second road we traveled, what we named “Green Ribbon Avenue,” we almost immediately spotted a group of four moose. Three were bulls, and one was a mature cow. We knew then that this was the spot we would start from the following morning.

And so we did. The next morning met us early, with snow falling. Al and I hiked into the woods to see if we could find a cow again. We were able to spot a very nice mature bull, but no cow. Later that day we also tracked a cow from the road through the snow, but a complicated situation prevented me from taking a close shot. We’ll save that story for another column.

And so we returned to camp with no moose. But what’s the big deal? We had until Thursday to hunt — let’s just enjoy it.

And then Tuesday came. And Wednesday. We were able to find some moose on Wednesday, but I missed a 75-yard shot at one because of a group of maples in between. So, I had missed two chances to help Al tag a moose.

We arrived back at camp Wednesday evening a bit frustrated, but committed to getting it done the next day. And that’s when the message came in.

My wife texted me on my Garmin inReach satellite device, and told me I should come home because we had been exposed to someone who had tested positive for COVID-19. A little shocked, I decided to brave the situation and let the five others I had been staying with in a small cabin and riding with in trucks know that I had to return home and be tested. Talk about a grim message. So I left camp that night, frustrated with my inability to be more helpful, and frustrated that this pandemic was going to cancel my opportunity for a last day in the moose woods.

Thankfully, I got home and tested negative. I’m sure the rest of the hunting party was relieved to hear that news.

All day Thursday I wondered and hoped that Al would find his moose. He was scheduled to return home that night. The hours ticked away with no news, until at about 2:30 I got a call from Al’s satellite phone that wouldn’t connect. I came to the conclusion that he had either gotten one or had given up. A little while later, a text came through from one of our other hunting partners, who confirmed Al had shot his moose! Thank goodness.

Al shot the moose about a half mile in the woods. The crew helped him quarter and pack it out. A successful moose hunt, without yours truly. But that’s just the way hunting goes sometimes, and I’ll be mighty happy to join in on the next moose hunt, bad luck charm or not.

I’ve got to thank Al, Mark, Steve, Buzzy and Derek for a fun few days in the woods. We had a lot of great laughs and tailgate meals, and I was happy to be a part of it.

James Cote is a government affairs consultant who successfully managed the 2014 bear referendum and has represented numerous hunting, angling and trapping organizations in Maine and across the country. He is also a co-author of a new book, “The Great Maine Moose Hunt.” He is an avid hunter and angler, and lives in Farmington.