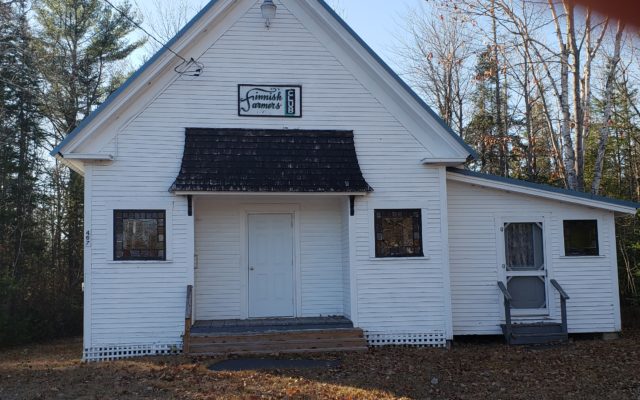 Cindy Ranta has been the primary bulla baker at Monson’s Finnish Farmers Club for years now — her dessert bread is always a staple of the group’s dances and potlucks.

“It’s also called pulla,” she said. “The Finns call it pulla and the Swedes call it bulla or nisu. My mother-in-law was a Swede and she taught me how to make it so I call it bulla.

The bulla — or pulla — hasn’t been in evidence this year. Nor have the dances and potlucks, as the Monson Finnish Farmers Club’s event schedule was canceled due to the novel coronavirus.

“This is the first year we’ve been closed for years now,” said club treasurer and one-time president Inez Goodine, an octogenerian who began attending dances with her six sisters at the Finn Hall on Route 15 just south of town during the 1950’s, then after leaving the state resumed her membership when she returned to Monson from Connecticut in the early 1990’s.

“It was tough for me, but you have to go with the majority that wanted it closed so we closed it. That’s the way it goes, but basically we didn’t have more than 50 people there at one time anyway.”

Finn Hall typically is open for club events on Saturdays from May to September so members of the region’s Finnish community may enjoy fellowship not only with each other but also with summer visitors and others who come to enjoy coffee and bulla, Finnish folk music and polka-inspired dances and waltzes that provide a taste of local history.

“I’ve seen people come who have never been before and by the end of the season they’re dancing up a storm and now they’re coming back every year,” Ranta said.

This year, the former one-room schoolhouse has remained quiet while the club’s aging local membership spends more time at home trying to protect their health against the COVID-19 pandemic.

“I think they’ve all missed it, and it’s really the socialization of it,” Ranta said. “Most everybody will get up and dance, but it’s more about just getting together and being social.

“Without the dances there was nothing going on. It’s been disappointing.”

The Monson Finnish Farmers Club was founded in 1935 by local Finnish families as a social club and service organization to help area residents during the aftermath of the Great Depression.

The Long Schoolhouse was acquired by the club from the town in August 1938 as a place for the local Finnish community to further preserve its cultural heritage. After undergoing renovations, the building soon became a popular gathering spot for summer dances, public suppers and other events.

“When we were kids we all were involved with my mother,” Goodine said. “We had dances just about every week.”

According to club history on the town’s website, “For a few years the Club was very active until [World War II] took away so many men. Also, after the war many younger families moved to other parts of New England for better employment opportunities and by then older members had passed on.

“By 1979 the Finn Hall needed to be rescued from property tax liens and from the obscurity of having had no Finn dances in the preceding years.”

But the local Finnish community responded, holding numerous dances, suppers, raffles and other events that enabled the club to recover. The Finn Hall was painted and re-roofed, a well was drilled and an addition for a coffee room was built next to the kitchen.

“We were hoping to have some work done on it this year while it was shut down,” Ranta said.  “It needs some cosmetic help inside. The old plaster walls are cracked, and it would be nice if we could get a grant. We don’t want to change it — we just want to fix it.”

In recent years the club not only has hosted its own events but also several contradances a year. Organizers would like that to continue once the coronavirus is under control.

“We’ve talked about having different dances down there, and if the hall was fixed up we could rent it for wedding receptions and things like that,” Ranta said. “We’ve talked about it, but this year with the COVID everything was just a mess.”

Organizers also hope this unplanned hiatus in activity at the Finn Hall won’t diminish interest in the club.

“There aren’t too many old, original Finns in Monson anymore,” Ranta said. “We’ve lost a lot of the members who used to come years ago and for young people, it’s not their cup of tea.”

One way to provide staying power for the club is to expand its reach, she suggested. The club now has a Facebook page, and it plans to include a “Public Welcome” message on the sign it hangs outside the Finn Hall when events are scheduled.

“It’s the Monson Finnish Farmers Club, but we’re trying to make it so people don’t think it’s an exclusive club for Finns because it isn’t,” she said. “It’s open to the public. Anyone can come to the dances. The thought that you have to be a Finn to belong, you don’t.

“I just hope it keeps going because it is a fun place when there are dances. We have a good time.”