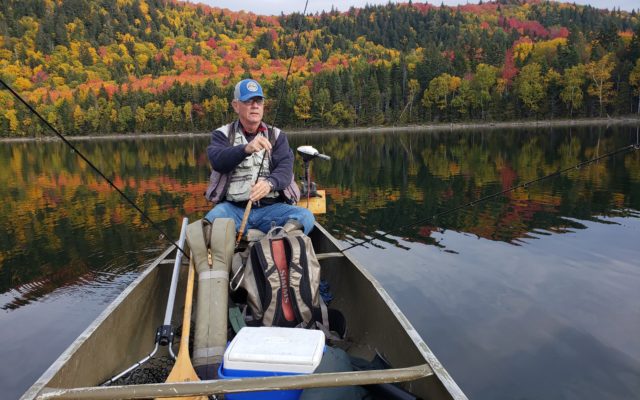 A search for Maine’s blueback trout

Contributed • November 13, 2020
By Steve Hirshberg September trout fishing in Maine is mostly an under-practiced sport. When the end of the open water fishing season approaches, most sportsmen are out grouse hunting, and the lucky moose permit holders are in the woods looking for the big prize.

September trout fishing in Maine is mostly an under-practiced sport. When the end of the open water fishing season approaches, most sportsmen are out grouse hunting, and the lucky moose permit holders are in the woods looking for the big prize. Ruffed grouse have been so abundant this year that it’s not unusual to limit out early in the morning, allowing plenty of time for fishing. That’s when my friend Terry and I decided to fish for the rare and elusive Arctic charr, also known as blueback trout.

Maine is the only state in the lower 48 where blueback trout are present as a native species. The last ice age receded from northern Maine about 10,000 years ago, so these fish are living artifacts. Today they survive in only 14 of Maine’s coldest, most pristine deepwater lakes and ponds. Arctic charr live only in the most northerly freshwater locations of the world. The Maine Department of Inland Fisheries and Wildlife takes great care in blueback trout management by protecting their home waters from the introduction of invasive fish species. The department enforces regulations on these designated lakes and ponds for “no live fish as bait.” The Native Fish Coalition and Trout Unlimited are two nationwide nonprofits that work to protect all coldwater native fish in Maine. The NFC’s active Artic charr conservation program has recently resulted in growing public interest to protect this species.

It was a crisp and clear Monday morning in the last week of September. We were far up in The County and it was the final week of the regular fishing season. We headed out early from Portage Lake, a small logging village east of the Allagash. Terry’s truck threw thick, dusty clouds as we gained elevation on the Realty Road. Many miles later and after a few sharp turns we were creeping downhill on a narrow, steep and rocky woods road to Black Pond. We were now within Deboullie Reserved Public Lands, a vast backcounty preserve of 21,871 acres. This is a wild and magnificent area where 1,981-foot Deboullie Mountain looms large. Ice caves and hiking trails beckoned, but on that day our canoe glided quietly through the calm and crystal clear waters.

We cast our dry fly lines along the shoreline and we trolled full sinking lines in the deep water. Brook trout eagerly took our sinking streamer patterns, but they were less cooperative on dries when we matched a brief blue winged olive hatch. We caught and released a dozen 13- to 17-inch wild brook trout. They were all a shimmering bronze color, as is typical in their pre-spawning splendor. At noontime we landed ashore for lunch, and what we thought would be a good leg-stretching outside of the canoe. Instead, we ate quickly and then relaunched as fast as we could after coming under a relentless precision attack from above. We were bombarded with dozens of spruce cones! A silent, unwelcoming large gray squirrel was right overhead. His accuracy was impressive. I had never experienced anything like it, and neither had Terry in his 30 years with the Maine Warden Service.

Throughout that whole day our canoe was the only watercraft on Black Pond. There were no anglers in sight along the shoreline. By late afternoon our paddles became heavy and the trolling motor battery was completely exhausted. We had caught a good number of very nice brook trout, but the shy Arctic charr remained elusive. That’s fishing, and there’s always another plan for next fall.

Black Pond is a hidden gem.  The last week of September 2020 was a great week for fishing in the north woods.