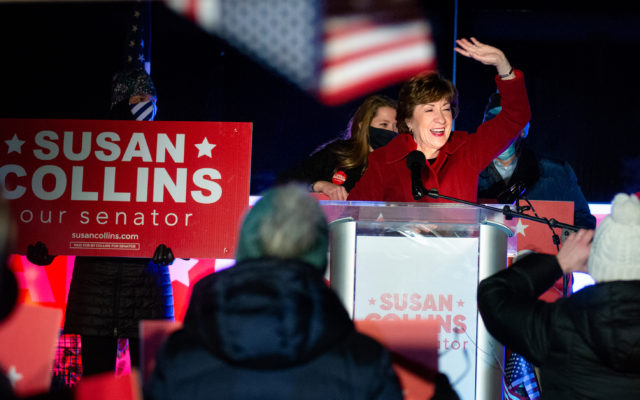 The 2018 confirmation of Supreme Court Justice Brett Kavanaugh started a massive Democratic campaign against U.S. Sen. Susan Collins. It looked for a time like the September death of Justice Ruth Bader Ginsburg could finish the senator’s career.

News of Ginsburg’s death came on a Friday evening, Sept. 18. Collins, who campaigned in western Maine earlier that day, issued a statement mourning the liberal icon. Her fellow Republicans fast-tracked a plan to replace Ginsburg, risking another hard vote for Collins. A party poll just afterward showed her 9 percentage points down in her re-election race against Democrat Sara Gideon, such a dive that the pollster wondered if it was an error, said a national Republican strategist who worked on the race.

A week later, Collins toured a sawmill in Enfield, 40 minutes north of Bangor. By that point, Collins had said that she would not vote for any pre-election Ginsburg replacement. She defended her Kavanaugh vote, saying she did not make decisions based on expediency.

“I should be reelected because I fight hard for the people of Maine each and every day,” Collins said.

Five weeks later, Mainers agreed, electing Collins to a fifth term by 9 points. No Maine senator has been popularly elected five times. It was a far cry from previous supermajority wins, but resounding after every public poll showed Gideon ahead. Democrats had pinned their hopes of flipping the Senate on Maine, leading to more than $200 million spent on the race.

Her comeback was buoyed by split-ticket voters who rebuked deep nationalization of the election and had lingering goodwill for Collins dating back to before her party’s takeover by President Donald Trump, whom she backed at times, bucked at others and contorted to avoid. She played a difficult hand well while support for her neophyte challenger eroded amid Republican messages late in the campaign that refocused the race on the liabilities of Gideon rather than Collins, according to interviews with dozens of observers and voters.

The senator argued her seniority and record dwarfed what Maine would get in Gideon. The challenger’s case typically came back to partisan control of the Senate. It ironed out to an awkward case in the end as Democrats contradicted their own anti-Collins arguments.

In October, the state party erected signs reading “Trump Collins 2020.” They also sent mailers to Republicans arguing that conservatives should support Trump-backing independent Max Linn over Collins by highlighting some of his conservative stances. The words “Susan Collins has changed” fronted a Gideon campaign website, but the candidate did not seem to believe them in an interview with The Atlantic published after the election.

The senator maintained that she had stayed consistent while politics had grown increasingly polarized. She voted for Trump’s judicial nominees at a similar rate to previous presidents’, and voted against her party more than any other Republican, according to FiveThirtyEight. She opposed Trump’s impeachment in February, as she had with President Bill Clinton, a Democrat, in 1999, saying the bar to impeach a sitting president was incredibly high.

Still, the 2020 campaign marked a major change for Collins. In late 2015, she scored a 78 percent approval rating, making her one of the nation’s most popular senators. She refused to endorse Trump in 2016 and rebuked him and fellow Republicans as a deciding vote to preserve the Affordable Care Act in 2017, returning to applause at the Bangor International Airport.

But her standing certainly fell in Democratic-leaning Maine after her vote for Kavanaugh, with her spirited defense of the justice who denied sexual misconduct allegations, setting the campaign against Collins in motion. Opponents were further rankled by Collins saying Trump “learned” from impeachment, comments she later walked back as aspirational. By late 2018, she had the highest disapproval rating of any senator, according to Morning Consult.

“For me personally, it wasn’t just about Kavanaugh as much as her blind support of Trump,” said Ronna Lugosch of Bristol, who volunteered for Gideon’s campaign after attending one of the Democrat’s events earlier this year. “When she said he was going to learn his lesson, that made me crazy, because I think that she was not able to see that that was not going to happen, and she should have known.”

The Kavanaugh vote also led Republicans to rush to her defense after she had looked vulnerable on her right. After the health care vote, conservatives wondered if she could emerge from a primary as she considered a gubernatorial run that she ultimately declined. Then-Gov. Paul LePage rallied his supporters against her at the time, but he endorsed her early in her 2020 race and she leaned on the party base for crucial support.

The Kavanaugh vote was at the root of a partisan realignment around Collins. The senator who has been a proponent of abortion and LGBTQ rights dating back to her 1994 gubernatorial run was endorsed for the first time this year by the evangelical Christian Civic League of Maine. As the race polarized, environmental and labor groups and others backing LGBTQ and abortion rights that once backed Collins flipped to Gideon as well as Senate control came into play.

Collins cast her absentee ballot on Election Day this year without saying publicly who she voted for in the presidential election. She also was the only Republican to vote before the election against Amy Coney Barrett, Trump’s replacement for Ginsburg. Trump hit her over her pledge to oppose Barrett, saying in a mid-October tweet that she was not “worth the work.”

But partisan lines had been redrawn on the ground. Ryan Portwine, a Trump supporter from Holden, said while wearing a shirt festooned with the president’s face on it during Donald Trump Jr.’s September visit to Maine that Collins’ decision to oppose any high court nominee before the election was part of what would make backing her “kind of tough.”

But he “couldn’t vote the other way” in the Senate race. There was a personal reason. Collins’ office helped his girlfriend when disability payments were held up at the post office.

“She really does help her constituents out,” Portwine said.

While it worried Republicans in September, polling in early October suggested Collins’ Barrett stance had little effect on her electoral chances, with just over half of voters saying it would not affect whether they would vote for her while equal numbers said it made them more or less likely to favor the senator.

At the polls on Election Day, Bangor Daily News reporters heard from voters who accepted campaign narratives. In Aroostook County, voters were proud of Collins. Others thought a senator with seniority could better advocate for Maine. Gideon backers cited Trump, Collins’ Kavanaugh vote or Democratic attacks on the senator’s campaign contributions.

Several knew Collins or felt helped by her, highlighting the power of her deep connections to the state. Mike Brochu, a 57-year-old plumber from Lewiston, often talked to her when she was a young receptionist at her father’s lumberyard. Nancy Heroux, 70, of Hampden has a sister who got a loan under the Paycheck Protection Program, a coronavirus stimulus program championed by Collins that sent $2.3 billion to businesses here. Naima Abdirhmon, a 32-year-old pharmacy worker from Portland who backed Gideon, said the senator helped her mother, a Somali immigrant, apply for citizenship.

Collins and her allies contrasted the Paycheck Protection Program with the Maine Legislature’s March adjournment, saying Gideon, the House speaker, “did nothing” to assuage pandemic effects. (Leaders of both parties agreed to adjourn, but Democrats and Republicans failed to cut a deal to return.) The senator emphasized her roots in Caribou while highlighting that Gideon grew up in Rhode Island.

Democrats, who spent at least $129 million in the race, buried Collins early in advertising that often villainized her, took bipartisan votes out of context or failed to note Senate norms. For example, a round of ads on Collins’ contributions from groups linked to the pharmaceutical industry did not note that she got less than most senators who have served as long as she has.

“The arguments fell flat in the end and they returned the person, the individual person, that they’ve known for years,” Collins spokesperson Annie Clark said. “That’s who they want fighting for them.”

Betsy Sweet, a progressive lobbyist who ran against Gideon in the Senate primary, questioned whether negative ads and other tactics used by national Democrats were effective, noting the similar losses of Democratic Senate candidates in states including Iowa and North Carolina.

She thought the party’s top-down strategy, including a focus on fundraising and treading carefully around certain controversial issues, prevented candidates including Gideon from connecting with the Democratic base. Democrats would be better served, Sweet said, by emphasizing how their policies would make people’s lives better.

“When somebody says, ‘Oh gosh, Sen. Collins disappointed me,’ then that’s only 5 percent of the battle,” Sweet said. “Then you’ve got to tell them what you’re going to do.”

Both Republican and Democratic strategists saw a tight race going into Election Day. A final poll from a top Republican group the week before the election showed Collins up 3 points but losing a ranked-choice voting runoff to Gideon because supporters of independent Lisa Savage, were likely to rank Gideon second. Clark would not discuss the campaign’s late polling.

In the final week, Democrats were panicked. Senate Minority Leader Chuck Schumer, D-New York, prepared members for the possibility that Gideon might lose, according to The Huffington Post. Democrats were particularly worried about two things — a late Republican blitz on allegations Gideon had not done enough to act on unproven rumors that former state Rep. Dillon Bates, D-Westbrook, had relationships with minors before he resigned, and Collins’ series of ads from Bill Green, a popular retired sportscaster.

There is evidence to back both up. Both Bates and Green got more Google search attention in October than they did at any point, respectively, since the 2018 allegations emerged against Bates and Green announced his retirement from News Center Maine in 2019.

In the end, Collins’ swing support had eroded but remained strong. She won by 23 points in the sprawling 2nd Congressional District, which includes her hometown of Caribou and kept the race close in the more liberal 1st District, which Gideon won by fewer than 3 points, while Biden won by 23. The incumbent benefited from ticket-splitting in both districts, running 7 points ahead of Trump statewide and winning historically Democratic towns, such as Lewiston and Auburn, that Biden also won.

Green was with Collins at her campaign party on Tuesday. By the night’s end, it was apparent that she would win. The next day, she delivered a victory speech. Her campaign bus revved up for a lap around Bangor. Steve Abbott, her campaign manager and longtime chief of staff, handed out Chick-fil-A sandwiches and fries to exhausted but exultant workers.

The same day, Collins filed paperwork to begin raising money for her 2026 re-election.