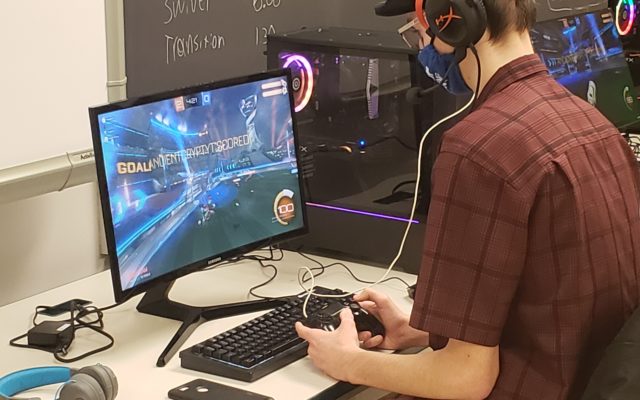 Contributed • November 10, 2020
By Ernie Clark, Bangor Daily News Staff Gavyn Gilbert is an eighth-grader at Piscataquis Community Middle School in Guilford who’s big into soccer, basketball and track and field. And even though the fall middle-school sports season in his area was canceled due to COVID-19, Gilbert has been able to redirect his competitive fire toward a new offering on the state’s interscholastic sports landscape.

Gavyn Gilbert is an eighth-grader at Piscataquis Community Middle School in Guilford who’s big into soccer, basketball and track and field.

And even though the fall middle-school sports season in his area was canceled due to COVID-19, Gilbert has been able to redirect his competitive fire toward a new offering on the state’s interscholastic sports landscape.

The 13-year-old, who has played video games ever since he can remember, is part of Piscataquis Community High School’s e-sports club.

The Pirates are among 13 entries from Maine schools participating in the inaugural season of esports sanctioned by the Maine Principals’ Association.

“Probably my favorite part of it is being able to play competitively with friends and to bring more kids together,” Gilbert said. “I thought it was a really great opportunity because there are a lot of kids that don’t necessarily play any sports or anything like that, and I thought it would be good to get more kids into it.”

Gilbert approached PCHS social studies teacher Ryan Botting at the beginning of the school year about bringing e-sports to their district.

“I’ve always been into competitive video games and tabletop games. I’m kind of known as that person in the school among the teachers and the students,” said Botting, the Pirates’ e-sports coach.

“Gavyn really pushed it at the beginning of the year in the context of COVID and all of that, so I went to the principal [John Keane] and he supported it wholeheartedly.”

Team members, from their homes, practice and play matches in Rocket League, a soccer game of sorts with rocket-powered cars as the on-screen competitors amid plenty of animated beating and banging. The players can communicate with each other during their 3-on-3 contests against other teams.

“The principal [has] already told us we could have one of the rooms as an esports room and treat it like a normal sport,” Botting said.

MPA assistant executive director Mike Bisson said no formal esports state championship will be scheduled until at least 20 schools have signed up, but he’s encouraged by the interest already shown in the activity amid the coronavirus pandemic.

“I actually think it motivated some schools to jump on board because they were worried they wouldn’t be able to offer a lot of things to kids,” he said. “Some scrambled at the last minute to get it and a lot more signed up for the spring.”

One person very familiar with Rocket League is Sean Stackhouse, a studio analyst for many of that franchise’s national events. He now serves as the esports coach at Maine Central Institute in Pittsfield.

“I try to tell everybody that Rocket League is just a physics simulator and if you think of it that way, then maybe you also can get an edge on the competition,” Stackhouse said.

“I think it’s one of the most exciting e-sports out there but maybe I’m a little biased. It’s fast-paced and high-scoring. Everybody moves at a fast enough pace that you see explosions, and every time the ball goes in the net you hear a big bang — all the visual effects that don’t detract from the integrity of the game itself.”

MCI practices and plays its matches in the Cianchette Math and Science Center, which is located on campus next to Wright Gymnasium.

And a lot of the skills used by gamers — eye-to-hand coordination, communication — are similar to those essential for success on the basketball court next door.

“Being able to play Rocket League here at school is a big opportunity in my opinion because I really do like to play sports games and Rocket League sticks out from other sports games,” MCI freshman e-sports player Bryan Wiers said.

Some gamers see e-sports as a pathway to a longer-term relationship with the sport or other computer-related activities.

“E-sports is definitely a growing industry and being able to do them at the high school level is going to help prepare people if they want to do anything in that industry in the future,” MCI junior Tyler Rowe said.

Stackhouse, who is an example of the professional opportunities within esports, he also sees life lessons found in traditional sports available to gamers in this new-age extension of the classroom.

“One of the things you learn here is teamwork and communicating clearly,” he said. “Trusting the guy next to you to do their job, but also a sense of obligation and following through on a commitment because these guys are now part of a varsity team here at MCI.”

“You have basketball players, baseball players and wrestlers, but it also very often targets kids that might not do sports and gives them that team atmosphere and a lot of the benefits of sports in a different way,” Botting said.

“It’s a rare kid who doesn’t play video games these days,” he said.

That common denominator fuels optimism in Maine about e-sports’ future impact on the high school scene.

“Even though it’s good for kids who may not play other sports, it’s still a competitive thing that people who like sports are attracted to,” Botting said. “I think the idea of the jock that only does sports and the nerd who only plays video games is kind of going away in high schools.”