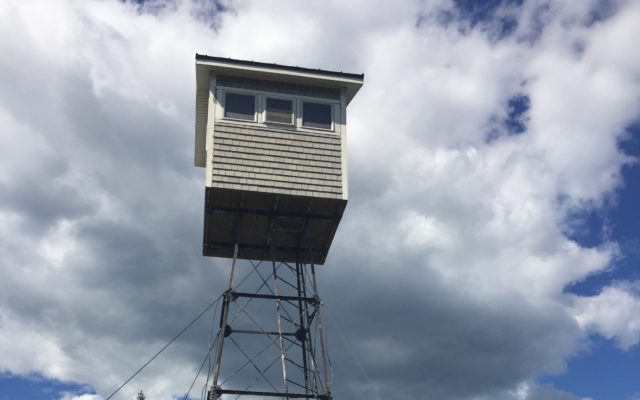 Contributed • November 5, 2020
By Matthew LaRoche The Bureau of Parks and Lands recently installed new fire tower cabs on Allagash, Round Pond (T13 R12) and Deboullie mountains. These projects have been in the planning stages for many years.

The Bureau of Parks and Lands recently installed new fire tower cabs on Allagash, Round Pond (T13 R12) and Deboullie mountains. These projects have been in the planning stages for many years. I personally had wondered if it would actually happen in my lifetime. It seemed as though every time the projects started to gain momentum a new obstacle would stall them.

For years, the Maine Forest Service took down or toppled old fire towers as they became unsafe and turned into a liability for the state of Maine. Maine had a total of 144 known mountains with fire lookout observers assigned to them. By the 1960s, many of the towers were abandoned in favor of fire detection flights. The last fire towers to be abandoned by the Maine Forest Service were the result of a budget crisis in 1991. Allagash and Deboullie mountains were among the last towers to be closed.

Observers would be in the towers scanning the horizon looking for smoke on high fire danger days. When smoke was spotted a sighting device called an alidade, would be aimed at the smoke, the bearing would be read and called in over the telephone in the early days and over the radio in later years. At one time, there were thousands of miles of telephone lines strung throughout the Maine woods. Ideally, two or more towers could sight on the smoke. Forest rangers on the ground would plot the bearings on a map, where the lines crossed on the map was the fire’s location.

An old retired forest ranger friend of mine named Oscar Gagne (now deceased) once told me that it might take two or three days to reach some fires. This was before the road network that we have today in the Maine woods was developed.

The new fire tower cabs were designed by Kleinschmidt Associates. They were modeled after the cab that was on Deboullie Mountain. Bureau of Parks and Lands staff built the first replacement cab, the other two were built by a local contractor.

Bureau staff and volunteers stabilized the steel tower structures and Helicopter Applicators Inc. out of Gettysburg, Pennsylvania, were contracted to fly the new cabs onto the towers.

One of the biggest hurdles to overcome with the projects was to line up funding. The cost was considerably more than originally anticipated, which led to much of the work being done in-house. Finding a way to lift the cabs while working through the state of Maine contracting process was a challenge. As you can imagine, risk management and workers comp issues were a huge obstacle to overcome.

Jacob Guimond, northern region manager for public lands said, “BPL is pleased to see this project nearing completion. Almost all members of the Northern Region staff worked together to move this project forward since its inception in 2001. We hope the recreating public can enjoy the fire towers for many years to come as they are part of Maine’s history and northern forest landscape.”

The cost of replacing all three cabs was more than $150,000. Money for the project came from the Public Lands Management Fund, which is primarily funded from timber sales on public lands, and a grant from the Recreational Trail Program.

Copies of the original maps in these fire towers have been made and will soon be displayed as they once were when observers were on duty keeping a watchful eye on Maine’s woodlands. We are seeking at least two alidades to install in the cabs so that visitors can visualize how a watchperson sighted and called in the bearings on a forest fire in days gone by. These fire towers were restored for recreational purposes only and will not be staffed by lookout observers.

Allagash Wilderness Waterway Notes: If you have or know where we might get an alidade to install in one of these towers, please contact me.

LaRoche is superintendent of the Allagash Wilderness Waterway, a Registered Maine Guide and an avid outdoorsman. He can be reached at 207-695-2169 or at matt.laroche@maine.gov