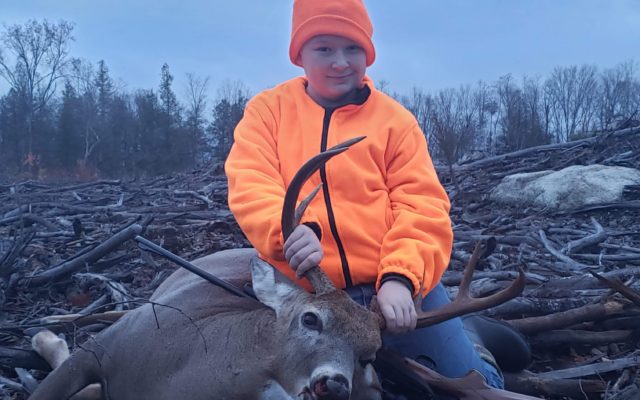 Gabe Feero began his hunting season bright and early on Saturday morning, heading into the woods of Medway with his dad, Wayne Feero.

The 13-year-old ended his hunting season nearly as early, and with a monster of a buck that he’ll brag about for years.

The pair were up by 5:30 a.m. on Maine’s Youth Deer Day, at their chosen hunting spot by 6, and Gabe was sitting on a rock by 6:30, waiting for something good to happen.

He didn’t have to wait long.

“My dad said [a deer] would probably try to come from our right and catch our scent,” Gabe said. “That’s what happened. Twenty-five minutes later, he comes out, to our right. I said, ‘Dad, he’s huge.’ Then I started twisting my body over to try to get a shot off.”

Halfway through trying to get himself into position to make a shot, Gabe thought he’d been busted by the big buck.

“I’ve almost got my gun at my shoulder, and he looked straight at me. I’m [telling myself], ‘Don’t move,'” he said.

After about 30 seconds, the buck stopped staring at Gabe and looked back at the ground, and Gabe made a perfect shot with his .270 rifle.

The deer — Gabe’s first ever — was a seven-pointer and weighed 205 pounds, field-dressed.

Hunters who take deer weighing more than 200 pounds are eligible for the Biggest Bucks in Maine Club, which is administered by The Maine Sportsman magazine.

Gabe’s mom, Kelly Feero, said that her son noticed a peculiarity about the deer after he’d shot it.

“He said he feels especially good about taking this [deer] as it had what looked like a partially healed broken ankle in the back,” Kelly Feero said. “It didn’t heal straight so the likelihood of him surviving the winter was probably pretty slim and his death would not have been as humane.”

Feero lives in Charleston and is an eighth-grader at SeDoMoCha Middle School in Dover-Foxcroft. His mom said he often talks about wanting to become a Maine game warden when he gets a little older.

Gabe said he had a great time on Saturday, and also got in some exercise.

And after tagging a 200-pounder as his first deer, how does he plan to top that feat?

“I don’t know,” Gabe said. “But my mom’s sitting right here and she said, ‘Get a moose permit.’

Do you have a Youth Deer Day story to share? Send a tale and photos to jholyoke@bangordailynews.com.