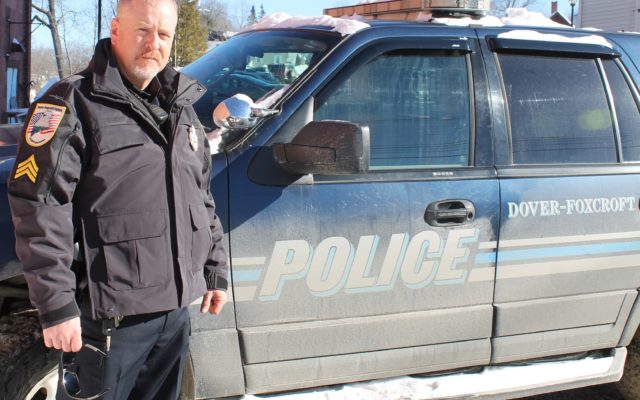 Stuart Hedstrom • October 27, 2020
DOVER-FOXCROFT — The town of Dover-Foxcroft did not need to look far to find a police chief, with the Board of Selectmen removing the acting from Matt Grant’s title during an Oct. 26 meeting at the Morton Avenue Municipal Building Gymnasium.

DOVER-FOXCROFT — The town of Dover-Foxcroft did not need to look far to find a police chief, with the Board of Selectmen removing the acting from Matt Grant’s title during an Oct. 26 meeting at the Morton Avenue Municipal Building Gymnasium.

“I’m happy to recommend that we appoint Matt Grant as chief of police,” Town Manager Jack Clukey said, mentioning that the board’s protection committee discussed the position the week prior. “He’s done a great job the last few weeks and I’m sure he is going to continue to do a great job.”

Grant was appointed with a term to expire on June 30, 2021. His annual salary is $64,800. Grant is the fifth police chief in the history of the Dover-Foxcroft Police Department.

A month ago Grant was appointed to serve  as acting chief for an indefinite period. Then-Police Chief Ryan Reardon had been arrested the week before and charged with Class B aggravated assault and Class C domestic violence criminal threatening with a dangerous weapon after he allegedly attempted to strangle a woman with whom he was having an affair. The town placed him on paid administrative leave when he was arrested.

Soon after, Reardon submitted his resignation, via a one-sentence letter, to be effective Oct. 9. Reardon’s letter did not specify his reasons for resigning.

Once Reardon was placed on administrative leave, Grant assumed responsibilities for the day-to-day operations of the police department.

Grant joined the Dover-Foxcroft Police Department as sergeant at the start of 2019 following his retirement the previous spring after 28 years with the Maine State Police. Grant served as an investigator, underwater recovery team commander and corporal. He has lived in Dover-Foxcroft for more than two decades.

In other business, the selectmen approved a LakeSmart evaluation by the Piscataquis County Soil and Water Conservation District at the town’s Sebec Lake property, including the beach.

Clukey said PCSWCD Education Coordinator Kacey Weber reached out to the municipality to inform them of the program. “If there are any issues with erosion and if there is soil erosion they will come up with solutions to alleviate that,” he said.

“It’s just an informative thing. There’s no cost, no obligation that the town has,” Clukey added.

The town manager touched upon a few items in his report.

“They’re really working hard and engaging the community,” Clukey said. He said the Masonic building is privately owned, but the Masons are able to continue to use the facility.

“The grant that [Town Clerk Lisa Bell Ronco] put in for and we got funded, we are moving ahead with some things,” Clukey said.

Clukey said some lighting improvements were being taken care of prior to the election. These include voting booth upgrades, using LED bulbs in the gym and the town has installed a new security light outside the gym. Clukey said that municipal building security cameras are being upgraded and sandwich board signs are being replaced.

“So that’s really helping us out by doing some things that we otherwise wouldn’t be able to do,” he said.

“We have issued 1,201 absentee ballots and we received 1,057 ballots back,” Bell Ronco said in updating Clukey’s respective figures of 1,140 and 965 from the Friday before the selectmen’s meeting.

She said the numbers of ballots sent out are more than the 1,067 total votes cast in the July primary.

Selectmen Vice Chairperson Cindy Freeman Cyr asked if there were any ballot issues, and Bell Ronco said there has been only one ballot with an issue.

Clukey said at the protection committee meeting the use of the gym for youth sports was discussed. He asked the selectmen to be thinking of this but the plan is to allow for youth sports in the space as it will be cleaned regularly and the athletic programs will be following all state health and safety guidelines. Clukey said the gym would likely remain closed for rentals to the general public.

The selectmen typically meet just once in December and Clukey proposed holding just a single session in November as well. The next regular meetings will be on Monday, Nov. 16, and Monday, Dec. 14.