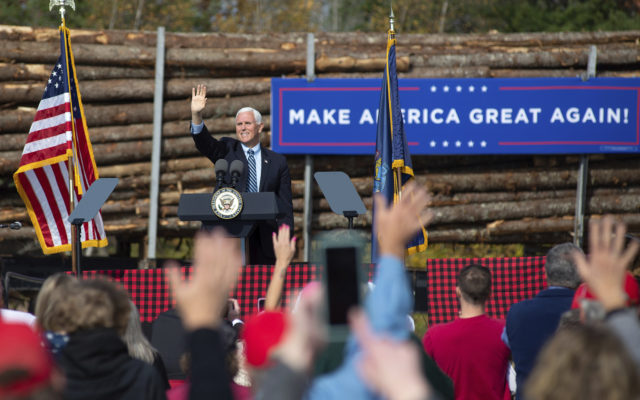 Contributed • October 19, 2020
By Caitlin Andrews and Michael Shepherd, Bangor Daily News Staff Vice President Mike Pence made a targeted pitch to conservative and evangelical voters in Maine’s 2nd Congressional District at a rally in Hermon on Monday, touting President Donald Trump’s trade policies and saying an “era of economic surrender is over.” The visit may be Maine’s biggest campaign event in the waning days of a 2020 election reshaped by the coronavirus pandemic, with an estimated 800 people in the crowd by the time Pence began speaking and more trickling in as the speech continued.

Vice President Mike Pence made a targeted pitch to conservative and evangelical voters in Maine’s 2nd Congressional District at a rally in Hermon on Monday, touting President Donald Trump’s trade policies and saying an “era of economic surrender is over.”

The visit may be Maine’s biggest campaign event in the waning days of a 2020 election reshaped by the coronavirus pandemic, with an estimated 800 people in the crowd by the time Pence began speaking and more trickling in as the speech continued. Trump has focused on Maine in recent months, though Democratic nominee Joe Biden is favored to win the Democratic-leaning state as he leads the president in national and many swing-state polls.

Any Trump electoral route could run through Maine’s 2nd District. He won it in 2016 by 10 percentage points after flipping several historically Democratic manufacturing centers and visiting Maine five times. The president has been effectively tied with Biden this year in the district, which is worth one electoral vote and deemed a toss-up by Decision Desk HQ.

Pence’s visit drove home Trump’s Maine focus. His administration in September opened tariff aid to fishermen affected by the president’s trade war with China, including the lobster industry which saw a massive decline in sales after 2018 tariffs. Democrats, including Biden’s campaign, have countered that the aid merely patched a problem the trade war caused.

The vice president filled his speech with references to the state, firing up an archconservative crowd when he said former Gov. Paul LePage, who introduced him and is chairing Trump’s Maine campaign, was “one of my favorite governors” and “he just might be again” in a reference to LePage’s potential 2022 return bid against Gov. Janet Mills.

Pence said “Bath-built is best-built,” a slogan used by Bath Iron Works shipbuilders. The shipyard and its biggest union resolved a strike in August, which led to a tweet from the president saying he was “glad to have helped” end the dispute. The White House’s role looked to be limited, but one of his advisers and the union credited a federal mediator.

Pence’s speech also catered to evangelicals, promoting the importance of faith while highlighting anti-abortion victories under Trump’s administration, such as blocking federal funds to Planned Parenthood and the U.S. Supreme Court’s decision to allow an exemption for religious employers to provide contraception under the Affordable Care Act. Maine was one of the least religious states in the country in 2016, according to the Pew Research Center.

The base issues still resonated with Beth Lorrigan of Brewer, who attended the rally on Monday. While Trump “maybe doesn’t seem like the one” who would resonate with Christians “because of the way he sometimes talks,” his policies are more important, she said.

“I’d rather have that than someone who can talk but doesn’t support the policies,” Lorrigan said.

The vice president also promised to confirm Amy Coney Barrett, the conservative judge that Trump has nominated to the Supreme Court, and also highlighted the role faith has played in her life. He did not mention U.S. Sen. Susan Collins, a Republican whom Trump criticized on Friday after she broke with her party during a difficult 2020 reelection race to oppose seating a new nominee before the Nov. 3 election, though LePage said she was needed in the Senate.

At the same time, Pence was introduced by former state Rep. Dale Crafts, the Republican nominee challenging U.S. Rep Jared Golden, a Democrat from Maine’s 2nd District. The vice president said voters should elect Crafts to “retire Nancy Pelosi,” the Democratic House speaker from California, though Crafts has trailed Golden significantly in polling so far in their race.

The rally came as coronavirus cases were climbing again in the U.S., driven by hotspots in the Midwest and Rocky Mountains. The country is fifth-highest in the world in per-capita deaths from the virus, according to Johns Hopkins University. Pence chairs Trump’s coronavirus task force and Democrats targeted that response in a statement before the vice president’s speech.

“They haven’t told the American people the truth, they’ve completely mishandled this, and as a result we still have a country with numbers going in the wrong direction and an economy that is continuing to be challenged,” said U.S. Rep. Chellie Pingree, a Democrat from the 1st District.