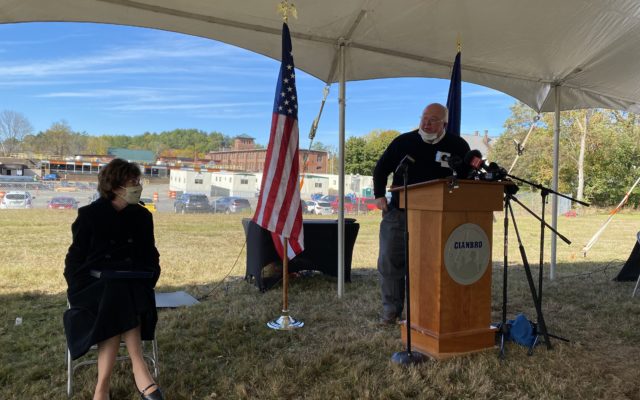 Puritan Medical Products, which is based in Guilford, first expanded into Pittsfield this past summer, when it received a $75.5 million federal contract to boost production of the swabs that have been in short supply throughout the pandemic.

That first expansion opened in July, allowing the company to hire some 400 more workers. By mid-November, it will have ramped up to producing 90 million foam testing swabs per month, according to Timothy Templet, Puritan’s co-owner and executive vice president of global sales. 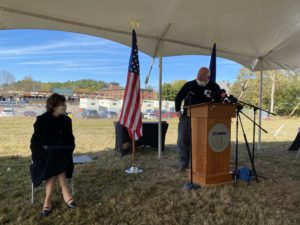 Bangor Daily News photo/Charles Eichacker
U.S. Sen. Susan Collins listens to John Cartwright, general partner of Puritan Medical Products, as the Guilford-based company announces its plans Monday to build a new manufacturing facility in Pittsfield where it will produce flocked swabs used in COVID-19 testing. The facility will join another Puritan swab production facility in Pittsfield that opened in July.

“Now we’re going into plant number three,” Templet said on Monday morning, during a ceremony to announce the opening of another Pittsfield facility in the former San Antonio Shoemakers factory.

Renovation of the latest plant began last month, and it will open by Jan. 1, according to the contractor doing that work, Cianbro. It is expected to employ another 200 workers and produce 50 million swabs per month.

It’s being funded with $51.2 million from the federal coronavirus relief legislation known as the CARES Act, according to U.S. Sen. Susan Collins, who also attended the ceremony on Monday morning in the midst of a tight race for reelection.

Officials from Cianbro and Puritan said that Collins helped secure the funding and provide other support as they pursued the two Somerset County expansions. During prepared remarks, she said that facility was a strong example of a Maine company working to fight the pandemic while also creating jobs and bolstering the domestic production of key health care supplies.

Both of Puritan’s new factories are in former industrial facilities on the banks of the Sebasticook River that were dormant when the company found them.

The first expansion took place in a building that had been serving as a warehouse after United Technologies Corp. Fire and Security shuttered it in 2014. Before making fire alarms, it was a woolen products mill. The swabs that are now being made there are made of foam and meant for rapid coronavirus testing platforms such as the ones made by Abbott Laboratories in Scarborough.

The second expansion is in the former San Antonio Shoe factory, which shed 145 jobs after closing in 2008. That company was based in Texas, but its founders came from Pittsfield. The relatives of one of those founders, Terry Armstrong, have agreed to donate the former factory to the Pittsfield Development Corp., which will in turn give ownership to Puritan.

When it opens, the second Pittsfield plant will make a different type of testing swab — “flocked” swabs, which are long and thin, with plastic rods and small synthetic fibers arranged at the tip in a flocked pattern that’s optimal for collecting viral samples. The flocked swab is more common in the laboratory-based tests that search for the virus’ genetic material and that the medical community sees as the most reliable way to detect it.

Puritan makes more than 1,200 different types of swabs for a variety of industries — not just those needed for COVID-19 testing. However, the COVID-19 pandemic has thrust the Guilford company into the national spotlight. President Donald Trump visited the company’s Guilford facility in June after it had received the Department of Defense contract to fund its first Pittsfield expansion.