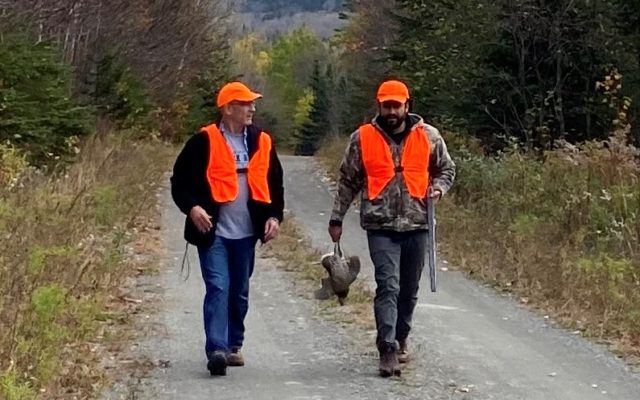 John Holyoke, Bangor Daily News Outdoors Editor • October 9, 2020
For the past few weeks, I’ve been hearing exciting, if anecdotal, reports about just how good the bird hunting in the Maine woods is this year.   “We headed out for a day of hunting, and three hours later, we had all filled our limits,” one acquaintance told me.

For the past few weeks, I’ve been hearing exciting, if anecdotal, reports about just how good the bird hunting in the Maine woods is this year.

“We headed out for a day of hunting, and three hours later, we had all filled our limits,” one acquaintance told me.

From 20 Mile Gate of the North Maine Woods, another, similar report: “This one group came back through disappointed. I thought they hadn’t seen any birds,” the gate attendant said. “No. They were sad because they’d already filled their limits and couldn’t hunt longer.” 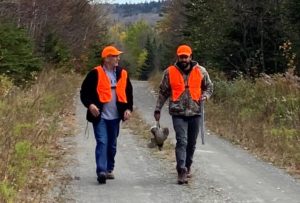 Bangor Daily News photo/John Holyoke
FIRST RUFFLED GROUSE — Pete Warner, left, and Will Warner return to the truck after Will shot the first ruffed grouse of his hunting career while spending time in the woods near Brassua Lake.

Those kinds of reports, you might recognize, are enough to spur a bird hunter (or, in this case, a group of bird hunters) into action. And earlier this week, I joined a group of friends on what has become a traditional way-too-short trip into the woods in search of ruffed grouse to shoot at, and moose to talk to.

Frequent visitors to this column may recognize this theme, which I’ve sometimes referred to as our “catch-and-release moose hunt.” The reason: My group of pals and I haven’t let the lack of a moose permit get in the way of our attempts to capture video and still photos of the magnificent critters.

Alas, this year, the moose didn’t participate. Over three days and hundreds of miles of driving, we saw plenty of tracks, and talked to some folks who’d offered up the familiar “You should have been here 10 minutes ago! He was the biggest moose we’ve ever seen” refrain. But photos? Video? Nope. We got nothing.

But our search for ruffed grouse turned out much, much better, and made our mooseless treks through the woods immaterial.

Simply put (and to echo biologists, hunters and land managers I’ve been hearing from), we saw more grouse than we’d ever seen in our lives.

This year’s trip to the vast commercial forests around Moosehead and Brassua Lakes was a three-day affair, with brothers Chris Lander and Billy Lander, along with Pete Warner, reuniting for yet another outdoor adventure. This year, we were fortunate to have Warner’s son, Will, join us.

That, I’ve found, is one of the few benefits of the pandemic we’re living through: People are more able or willing to head into the woods for some outdoor recreation. In past years, Will Warner’s professional life has taken precedent. This year, he was eager to find an outlet for his growing cabin fever, and gladly tagged along.

We were happy to have him, and as we slow-rolled our way along the dirt roads, swapping the same familiar stories, and looking at the timeless vistas that stretched out ahead of me, this year’s hunt seemed fresh and new, for the first time in a long, long time.

I found myself explaining to Will, filling him in on the details of yet another inside joke or reference to stories we’d first started entertaining each other with 20 or more earlier.

Will was good-natured, listened to all of our stale jokes and half-true tales, and seemed to enjoy absorbing the rare bits of woods wisdom we tossed his way.

And eventually, he even shot his first ruffed grouse.

That, after the way this column began, may have seemed like a foregone conclusion. But as any bird hunter could tell you, it’s rarely that simple.

Sometimes, the birds are nervous. Often, they run or fly away before you can get a shot off. And at the end of a long day of hunting, as we stretched our road-weary legs, all of us could agree that just seeing abundant birds, getting a few shots off and having a warm camp to return to made for an enjoyable day.

We ate like kings, laughed like loons, and ribbed each other for shots we missed, shots we never took, or roads we wished we’d never wasted our time hunting.

And then, finally, we shook hands, and promised we’d do it again.