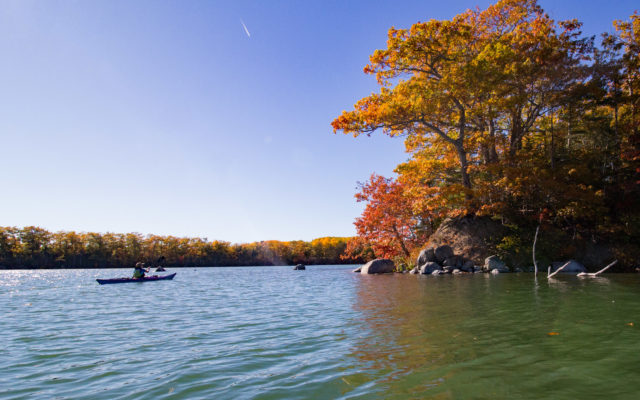 Aislinn Sarnacki, Bangor Daily News Staff • October 1, 2020
As the days shorten and the weather cools, many people who enjoy canoeing, kayaking and other paddle sports may be looking to extend their season into the fall. Getting out on the water can be a wonderful way to experience Maine’s colorful foliage and observe wildlife as it prepares for the winter.

As the days shorten and the weather cools, many people who enjoy canoeing, kayaking and other paddle sports may be looking to extend their season into the fall. Getting out on the water can be a wonderful way to experience Maine’s colorful foliage and observe wildlife as it prepares for the winter. But there are a few things paddlers should consider before launching their boats late in the year.

“Some of the risks in the fall are that it gets cold earlier, and it gets dark earlier,” said Karen Francoeur, a certified Master Maine Guide and owner of Castine Kayaks Adventures, a company that provides guided tours and kayaking skills classes.

Francouer guides kayaking trips off the coast of Maine until mid-October, then continues to paddle in a non-professional capacity into November, often going for a paddle on Thanksgiving Day. Meanwhile, Master Maine Guide Dan Pelletier guides canoe trips on a number of Maine rivers, streams and lakes well into the fall.

Both experienced guides treasure the fall paddling season for many reasons, but they agree that recreationists do need to take some extra precautions.

In late summer and early fall, Maine’s coastal and inland waters are often at their warmest, Francouer said, but that rapidly changes after a few cold nights and frosts. In a matter of weeks, the water temperatures in Maine drop dramatically. In addition, the air temperature can drop to below freezing, especially after the sun goes down.

To combat against the cold, pack extra clothing, Pelletier said. And unless you’re dressed appropriately and have planned for it, don’t get caught out on the water too long after sunset.

“Be prepared for it being cooler at night,” Pelletier said. “Basically you have to bring winter clothes to be on the safe side if you’re going for an overnight paddle.”

In addition to staying warm, it’s important to stay dry, Francouer said. She suggests wearing head-to-toe synthetic or wool clothing — no cotton. Cotton tends to absorb water and stay wet for long periods of time, which could increase someone’s risk of becoming cold and uncomfortable.

Francouer often wears a waterproof jacket and pants in the fall, as well as fast-drying water shoes. Sometimes she even dons a drysuit. She also suggests people pack gloves (waterproof winter gloves would be just fine) and a winter hat. She also sometimes uses pogies, which are protective flaps that attach to your paddle to cover your hands while paddling.

“If your hands get cold, there aren’t a lot of ways to warm up your hands while kayaking,” she said. “And it’s pretty hard to paddle when your hands are frozen.”

In the fall in Maine, weather can fluctuate greatly from day to day, and even within a few hours as weather patterns change and wind blows in from different directions.

“Every day can be so different,” Francouer said. “You need to be a little more prepared with your clothing and realize that throughout the day, [conditions] might change a lot.”

Capsizing your kayak or canoe can be dangerous no matter what time of year, especially if you don’t have the skills or tools to re-enter your boat and empty it of water. But in the fall, this can be an even bigger danger than in the summer because the water and air is colder, increasing your risk of hypothermia.

This is one major reason to select easier paddles in the fall rather than test your skills in big waves, strong ocean currents, river rapids or big tides.

“I think people should begin to really minimize the risk [in the fall],” Francouer said. “So even for myself, by November, I’m not usually paddling on the ocean. I’m paddling calm waters, still waters, where it’s more protected.”

And regardless of your skill level or how easy the paddling location is, you should always carry easily accessible safety gear, including a whistle and light, and wear a life jacket. That way you’re prepared for the worst case scenario.

Be aware of hunting seasons

A number of different hunting seasons overlap throughout the fall in Maine, including various duck hunting seasons in which hunters often search for their prey by water. To increase your visibility to hunters, wear bright colors, such as blaze orange. You may also want to avoid hunting hot spots, Francoeur said. That way you won’t disrupt a hunting party.

To stay up to date about what hunting seasons are open, visit the Maine Department of Inland Fisheries and Wildlife website at maine.gov/ifw. You can also check the hunting laws on the land surrounding bodies of water. On some properties, hunting is not permitted.

Water levels may be low

The water level of streams, rivers and brooks are often lower in the fall than they are in the spring, and this may impact where you’re able to paddle. For many major bodies of water in Maine, the water level and flow is continually measured and broadcasted online by the United States Geological Survey.

On the other hand, the water level of some rivers may actually rise in autumn.

“Water level is always a consideration when I’m guiding,” Pelletier said. “This time of year, a number of lakes are releasing water out of dams to bring down the water level, so some rivers are getting nice water levels.”

The water level isn’t as much of a concern if you’re visiting a body of water that’s relatively deep, such as a lake. Even if the water level is low on those bodies of water, there’s still plenty of water for paddling.

The joys of fall paddling

While fall paddling can be riskier than summer paddling, it also has many benefits.

“The colors are really pretty,” Pelletier said. “And in general, the weather is good, with cool days and crisp cool nights.”

The water is also a great place to escape crowds in the fall, Pelletier said, since the watersports are generally more popular in July and August. Fall is also a time in which paddlers don’t have to worry about pesky flies like mosquitoes and blackflies, and the short days make it easier for paddlers to enjoy the sunrise, Pelletier said.

For all these reasons, many paddlers extend their season well into the fall, exploring Maine’s many waterways until snow flies and ice creeps in from the shore.