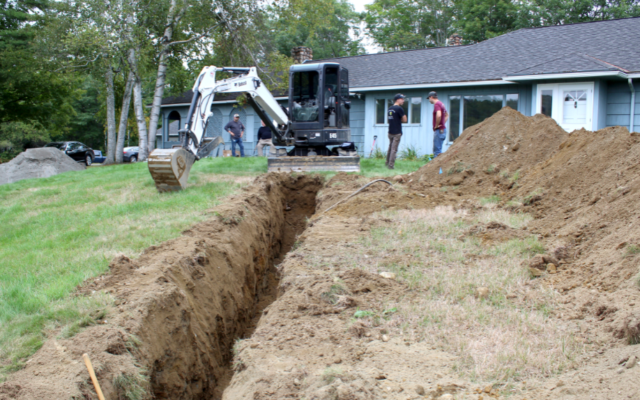 Workers find human bones while digging a trench in Guilford

GUILFORD — Excavators were digging a trench in Stephanie Cartwright’s yard on Water Street in Guilford to upgrade the power system. That’s when Zac Herrick and his crew found something they didn’t expect: human remains.

Skulls and bones of two people were eventually uncovered, but authorities found that it was an old grave site and not a current crime scene.

“One of our jobs is to dig graves for the town. We get paid to bury them and now we get paid to dig them back up,” said Herrick, who owns Herrick Construction Inc. of Abbot. 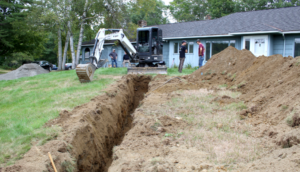 Herrick pointed out that the old power system was just three feet from the graves.

“So, however many years ago [they put in the old power system], they missed it by three feet,” Herrick said.

Workers from Dover-Foxcroft-based B. Washburn Electric were also working on the project when the bones were first discovered earlier this month.

“We believe a cemetery had been moved due to road construction but these two graves weren’t moved,” Lyford said. “We didn’t find any records of a cemetery but it could have been an old family cemetery. Land swaps hands, families die off or move away.“

For Lyford, who has been in law enforcement for more than 30 years, this was a first for him.

“It’s extremely unusual but, according to the medical examiner, it isn’t as uncommon as we think,” Lyford said.

He added that he was relieved that it wasn’t the result of a recent murder.

“When we get called to these, we first have to treat it as a possible crime scene until we can safely rule it out. These were probably six feet down and we also found casket parts so we quickly ruled out it being a crime scene,” Lyford said.

The medical examiner in Augusta was contacted and the examiner got in touch with Dr. Marcella Sorg, who is a research professor in the anthropology department at the University of Maine. Sorg also is the consulting forensics anthropologist for Maine, New Hampshire, Vermont and Rhode Island.

The two bodies belonged to middle-aged men and the cemetery was moved in the late 1950s or 1960s, but the graves are much older, Sorg said.

“Fairly frequently, towns need to move cemeteries and when they do, things can happen like this,” Sorg said. “The other thing that happens is there are a lot of unmarked family graves. As people’s usage of the land changes and houses and roads get built, you turn up these unmarked graves. There are no monuments [to mark them]. It is perfectly innocent.”

Sorg said the remains are being housed in a funeral home and the goal is to “re-bury them in a suitable place.”