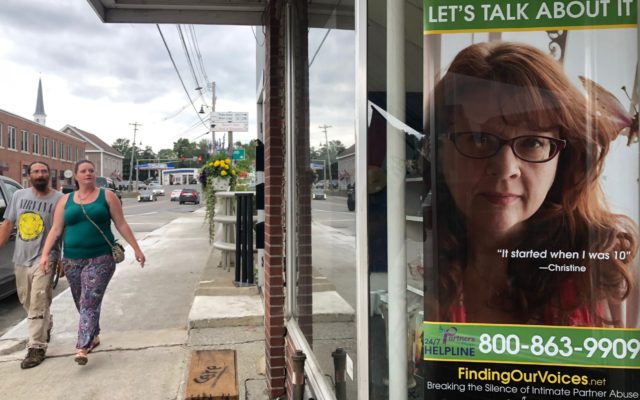 Domestic violence is a second pandemic

Patrisha McLean, Special to the Piscataquis Observer • September 18, 2020
It is bad enough that COVID-19 is causing a spike in domestic violence.     But the supremely scary irony is that, at least where I live in midcoast Maine, the pandemic is also giving violent domestic abusers “Get Out Of Jail Free” cards, which is only emboldening them, and further endangering their victims and the community.

It is bad enough that COVID-19 is causing a spike in domestic violence.

But the supremely scary irony is that, at least where I live in midcoast Maine, the pandemic is also giving violent domestic abusers “Get Out Of Jail Free” cards, which is only emboldening them, and further endangering their victims and the community.

Over the past year, I have been dumbfounded over the suspended sentences and negligible jail terms for violent domestic abusers. But in the past months — coinciding with the advent of COVID-19 — this lack of accountability and justice has become a sick joke: The words domestic violence stalking, terrorizing and assault charges in the court reports of our local newspaper, invariably followed by dismissed, dismissed, dismissed.

Recently, someone from the local prosecutor’s office expressed their concern to me that, in a bid to prevent the coronavirus from spreading in jails and prisons, there is enormous and growing pressure from the judiciary and other factions to release inmates, including alleged violent domestic abusers from custody after their arrest, and to minimize jail sentences.

So just when our three branches of government should be working overtime to help the women and children (and men) suffering more physical and mental terrorizing from depraved family members because of COVID-19 (isolation, financial strain, etc.), they are putting them in even more danger.

I can understand releasing non-violent criminals from jail and not sentencing them to jail, in order to stem the spread of the virus. But why on earth are the officials charged with protecting our community releasing and minimizing the jail sentences of those charged as domestic violence abusers? Waldo County Sheriff Jeffrey Trafton said, “If somebody will physically and emotionally abuse somebody that they love, what will they do to anybody else? This makes them very, very dangerous.” Rachel Louise Snyder in her book “No Visible Bruises” reported that more than half of mass shootings in America involved domestic or family violence.

On the very day last month that I was bringing domestic abuse-awareness banners to Dover-Foxcroft, a 19-year-old woman was killed in Lewiston, allegedly by the man she had just broken up with. (To the question, “Why don’t they leave?” The answer is “They do all the time. And sometimes that gets them killed.”)

Last week In Orrington, two streets were closed down while police negotiated with a man after he violated bail conditions for a previous domestic violence arrest.

But the perfect storm will whip a few short months from now when we are stuck inside against the cold and ice, and it is likely another blast of COVID-19 infections will further close down the safe places of schools and workplaces and daycares, and end face-to-face interaction with lawyers and social service workers and domestic violence victim advocates.

We justifiably feel powerless in the face of one but we can do something about the other: Recognize and address domestic violence as a COVID-19 imperative, and prioritize prosecuting violent domestic abuse offenders who come to the attention of the court (the vast majority never do) to the full extent of the law.

What can you do? Keep an eagle eye on domestic violence sentencing as reported in your local newspaper and speak out about it. Ask everyone holding political office and running for office what they will do during the pandemic and beyond to hold domestic violence offenders accountable.

COVID-19 provides an opportunity to thin the jail population of people who do not have to be there: Restorative justice sounds great for some crimes. But as long as there are jails and jailers, violent domestic offenders need to be in jail and they need to stay in jail for their full sentences.

No more plea deals for violent domestic abusers, and especially not during the COVID-19 pandemic.

McLean is the founder and president of Finding Our Voices, a non-profit organization breaking the silence of intimate partner abuse town by town all across Maine.