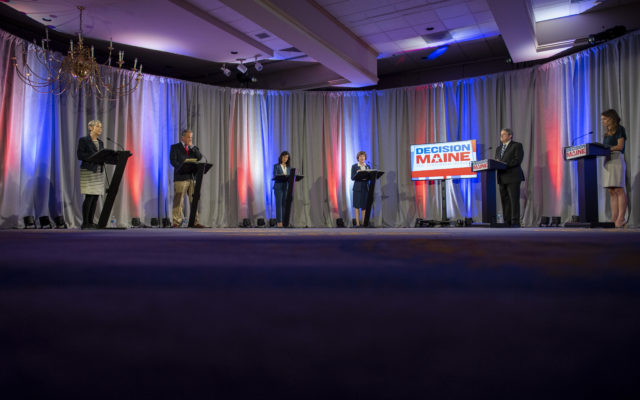 Where Maine’s U.S. Senate candidates stand on money in politics and other reforms

Opposition to “dark money” was one thing Maine’s U.S. Senate candidates were able to agree on in a debate last week. But U.S. Sen. Susan Collins, R-Maine, House Speaker Sara Gideon, a Democrat, and independents Lisa Savage and Max Linn — disagree on how to address that and a number of other political reform ideas.

The Senate race is the most expensive in Maine history, with the party candidates raising more than $40 million as of the end of June with another $40 million flowing into the race from super PACs and other outside groups, according to federal data. Collins and Gideon have sparred over each other’s fundraising while hauling in and benefiting from record amounts.

Several issues commonly come up around money in politics. One is a 2010 Supreme Court decision that made it possible for corporations to spend on elections. Opponents say corporations should not be entitled to political speech. Somewhat separate is dark money, or spending by nonprofits that avoid disclosing donors by officially advocating for issues, not candidates.

There are a number of other political reforms that pop up periodically, including lobbying reforms and term limits. Here is a rundown of where Maine’s U.S. Senate candidates stand.

Collins decried dark money during the most recent U.S. Senate debate, while her campaign has highlighted her record on transparency and anti-corruption measures. The Maine senator was an original sponsor of the 2002 McCain-Feingold Act, which was among the most significant pieces of campaign finance legislation in the last few decades.

It was largely neutralized by the 2010 Citizens United decision, which Collins has said she disagreed with. At Friday’s debate, she said she does not support a constitutional amendment to overturn the decision. In 2014, she cited criticism of one such measure from the American Civil Liberties Union, which called it overbroad.

She also helped lead passage the 2012 STOCK Act, an easily passed law barring members of Congress from using knowledge gained in their official position to trade stocks. She joined Democrats in 2018 to vote to overturn a Trump administration rule that would have allowed political nonprofit groups to avoid reporting donors to the IRS.

In this campaign and her last in 2014, Collins’ opponents have noted her opposition to the DISCLOSE Act, which is intended to crack down on some forms of dark money by increasing disclosure requirements. The senator characterized it in 2010 as a “partisan bill that would not fix the real problem,” noting that it favored some groups, including unions and the National Rifle Association. She has routinely cited ACLU opposition as well.

Collins’ opponents this year have also highlighted contributions her campaigns have gotten from corporate PACs, including those affiliated with the pharmaceutical industry, though she has received less in pharmaceutical-linked money than average among senators who have served since 2007. The senator’s campaign has said contributions do not influence her decisions.

Gideon laid out a campaign finance reform agenda early in her campaign that included common Democratic planks from a constitutional amendment to overturn Citizens United to the DISCLOSE Act. She supports strengthening the Federal Election Commission, which enforces campaign finance laws but has been paralyzed without a quorum since last year.

She has called for a lifetime ban on lobbying by former members of Congress, an idea that has recently gained traction from politicians from Rep. Alexandria Ocasio-Cortez, D-New York, and Sen. Ted Cruz, R-Texas. Gideon also said she would not accept gifts or travel from lobbyists in the Senate and would support legislation tightening loopholes allowing lawmakers to get gifts.

Gideon pledged to reject money from corporate political action committees during her Senate campaign. Her opponents have attacked her over contributions her now-defunct state leadership PAC received from corporations as well as over contributions her Senate campaign received from leadership PACs, some of which take corporate PAC money. Those groups represented 0.2 percent of Gideon’s total Senate fundraising as of June 30, however.

The House speaker was also fined $500 last year after the state ethics commission concluded she had illegally reimbursed herself for political contributions through her leadership PAC. Gideon said she received incorrect guidance.

Savage, a former Green activist running as an independent, highlights the two-party system as a structural problem with American politics. The Solon teacher, who has rejected corporate money, supports a federal variation of Maine’s successful Clean Elections law and providing free public airtime and open debates for all ballot-qualified candidates on TV and radio.

She said she would work to overturn Citizens United and support legislation more tightly regulating campaign spending. She also would support replacing the Federal Election Commission with a stronger independent watchdog.

Savage also supports barring members of Congress and their top staffers from working as lobbyists for five years after they leave office. Currently, former House members must wait a year while senators must wait two years. There is no waiting period for staffers.

She would also advocate for other reforms, including ranked-choice voting for all elections, using independent commissions to conduct redistricting and shifting toward proportional representation, a system where districts are bigger and represented by multiple legislators.

Linn, who highlighted tens of millions of dollars spent by Collins, Gideon and allies during the first Senate debate, has also made congressional term limits a centerpiece of his campaign, saying senators should serve no more than two terms. Term limits are a cause he has championed since he emerged as a Florida political gadfly in the 1990s.