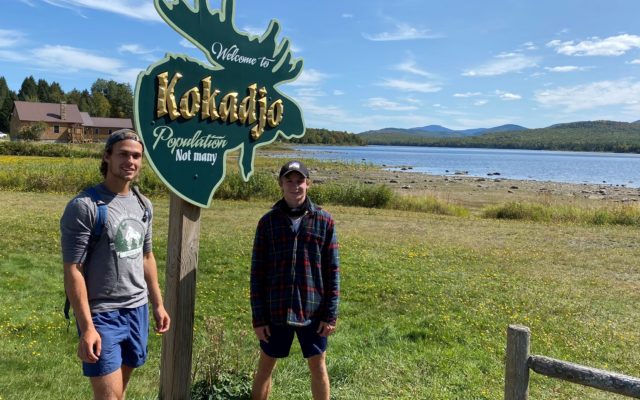 With college gone remote, two teens hit the road for a gap year fishing adventure instead

John Holyoke, Bangor Daily News Outdoors Editor • September 15, 2020
According to their original plan, Luke Konson and Daniel Balserak would have spent last weekend as wide-eyed freshmen enjoying their first month at Clemson University in South Carolina. Instead — call it a really cool Plan B — they were sleeping in a Honda Odyssey in the woods near Maine’s largest lake, making their latest stop in an epic gap year road trip.

According to their original plan, Luke Konson and Daniel Balserak would have spent last weekend as wide-eyed freshmen enjoying their first month at Clemson University in South Carolina. Instead — call it a really cool Plan B — they were sleeping in a Honda Odyssey in the woods near Maine’s largest lake, making their latest stop in an epic gap year road trip.

Konson and Balserak, who are from Oakton, Virginia, are spending the next year forgoing their official studies while they try to catch the official state fish in each of the 50 states. Over the weekend, that quest brought them to the tiny town of Kokadjo (“Population: Not many,” according to a popular bumper sticker in these parts), where they hoped to catch a landlocked salmon in the Roach River.

Konson said that in late July Clemson announced that it would hold remote classes for the first month of the semester in response to ongoing COVID-19 concerns. Both he and Balserak had spent the last three months of high school learning remotely, and decided they’d had enough. 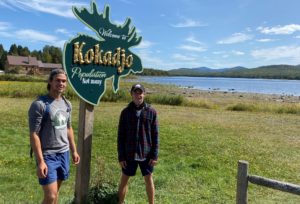 Bangor Daily News photo/John Holyoke
GONE FISHING — Luke Konson, left, and Daniel Balserak, of Oakton, Virginia, were high school classmates who were to have begun college at Clemson University this fall. Instead, they’ve deferred entering college for a year and are fishing their way across the U.S., trying to catch the state fish from each state. On Saturday they were on the Roach River in Kokadjo trying to catch a landlocked salmon.

In the grand gap year tradition, they decided to hit the road.

“We decided to defer [enrollment], and then we were trying to decide what we were going to do,” Konson said.

The duo — both avid anglers — just happened to be fishing in North Carolina when they began brainstorming a yearlong fishing trip. But even they had a hard time rationalizing the idea. Then they added a goal of catching each state’s official fish.

“We kind of came up with this idea of putting traveling with fishing, and thought, how can we make it actually mean something, because it’s pretty hard to justify ‘Hey, I’m going to travel and fish for a year,'” Konson said. “So now we have this mission to it, something to keep us moving, something to accomplish.” 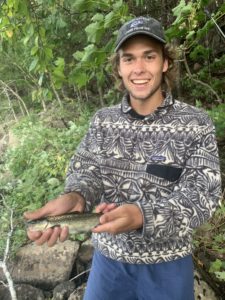 Photo courtesy of Daniel Balserak
MAINE STATE FISH — Luke Konson of Oakton, Virginia holds a small landlocked salmon he caught on Sept. 14 while fishing in Maine. Konson and a friend are spending the next year trying to catch the official state fish in all 50 states.The landlocked salmon is Maine’s state fish.

Maine’s landlocked salmon were proving to be a challenge, in part because the young anglers are new to fly fishing, and the Roach River is a fly fishing only water. On Monday afternoon Konson reached out via text to say they’d finally succeeded, catching a small salmon and checking Maine off their list.

“It’s not exactly huge, but it counts,” Konson said. 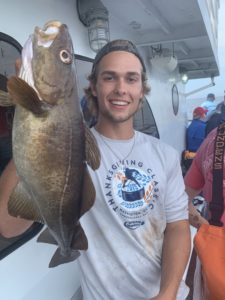 On Saturday, Konson had explained that he and Balsarek had no set itinerary, and were willing to put in the time necessary to succeed in each state.

“Because we live in the car, we only can drive places. We’re pretty mobile. If we stay in a spot for a couple of days that’s supposed to be good but it doesn’t deliver, we can just move to another spot,” Konson said.

They do have some plans, though. Next July they’ll fly to Alaska to fish for king salmon. And at some point, they’ve got to get to Hawaii to try to catch a tongue-twister of a state fish. Hawaiians call it Humuhumunukunukuapuaa, but you’re welcome to just say “reef triggerfish.”

Balsarek said his parents weren’t as eager for him to embark on the trip, and his participation on the two most exotic stops — Alaska and Hawaii — is still up in the air.

“I’m working on that,” Balserak said with a chuckle.

Along the way, they’re taking time to appreciate the natural wonders that each state presents, and they’re trying to learn as much as they can by paying attention to historical sites they might pass.

And Maine has been a hit for Konson and Balsarek thus far.

On the way to Kokadjo and the Roach River, they saw an odd traffic jam, and when they pulled over to take a peek with the other rubber-neckers, they were surprised by what they saw.

“There were like six cars stopped and we didn’t really know what was going on. Then we saw the moose on the side of the road,” Konson said.

The scenery has been pretty impressive, too.

“This is the middle of nowhere, but it’s beautiful. This is the coolest place we’ve been, by far,” Konson said. “We got to do the drive [into Greenville], where you see Moosehead Lake for the first time. It was beautiful. Insane. And the sunset last night, on the mountains [was great] … There’s just so much to see. We live in a very cool country where there’s just a lot of different kinds of landscapes and towns. We’ve been able to go through a lot of them so far.”