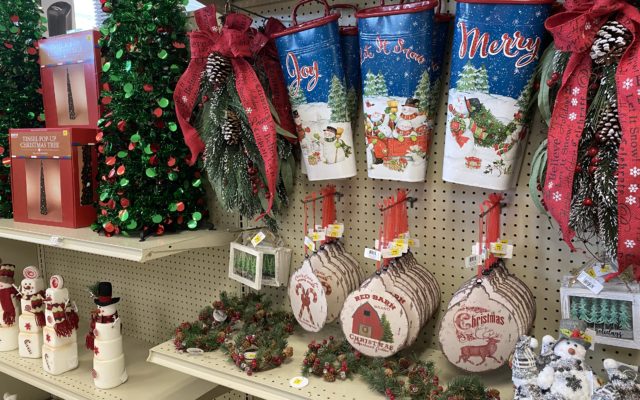 How two iconic Maine retailers are preparing for a long, virus-altered holiday season

Lori Valigra, Bangor Daily News Staff • September 13, 2020
The year-end holiday season started earlier than usual in Maine this year, with moose tree ornaments and Christmas cards with coastal scenes already lining aisles in Renys department store in September.   The pandemic holiday season promises to be one of the longest in memory as retailers stretch to make up for fewer customers allowed inside stores, shoppers with less disposable income, unpredictable product shortages and a shift to online purchases.

The pandemic holiday season promises to be one of the longest in memory as retailers stretch to make up for fewer customers allowed inside stores, shoppers with less disposable income, unpredictable product shortages and a shift to online purchases. Normally starting in November, the season can make or break a retailer’s success, contributing about 20 percent or more of annual sales, according to the National Retail Federation.

Two iconic family-owned Maine retailers, 108-year-old L.L. Bean and 71-year-old Renys, have seen tough times in the past, including several recessions and other pandemics. While much remains unknown about the future track of the virus and economy, these long-timers may be more adept than most at figuring out new ways to drum up sales and locate hot items in short supply.

“We’re pretty good at digging around and our buyers are excellent,” John Reny said. He is president of Newcastle-based Renys and the son of the 17-store chain’s founder, R.H. Reny.

One of the biggest problems has been that manufacturers, which shut down early in the pandemic, still can’t catch up with demand, he said. Reny expects a good holiday season after summer sales almost caught up to the previous summer.

Renys had closed its stores for two months starting in March, but started curbside sales in April before reopening by June. Still, that two months will trim 10 percent off of the retailer’s full-year sales, which normally are around $70 million, Reny said. The company employs 450 people and plans to hire some seasonal workers over the holidays.

Renys, like many smaller Maine retailers, relies on in-store customers rather than online sales. Reny said the constantly changing and surprising merchandise the store chain often sells and its focus on sanitizing and social distancing give it an edge with shoppers.

“A lot of stuff is brand new every day, five days a week, and you never know what you’re going to find,” Reny said, noting the chain has a 130,000-square-foot warehouse to stock goods. “And people say, ‘I feel really safe in your store, you’re doing the right stuff.’”

One popular event that might not take place the same way this year is the store’s biggest sale day, the first Saturday of November, when early birds arriving at 6 a.m. can get 20 percent off every item in the store for the next three hours. With coronavirus-related limits on the number of people in the store, Reny is trying to figure out a different way to do something similar.

That in-store focus bucks the national trend that shows a major switch to online shopping this holiday season. More than half of consumers polled said they expect to shop online this year compared to fewer than 15 percent last year, according to a recent survey of 1,500 consumers by the consulting firm Sykes. More than three-quarters said they would not shop in a crowded mall. The same number want a mask mandate at local retailers.

L.L. Bean has already seen a sharp swing to online sales at the same time the number of shoppers at its 50 U.S. stores is declining, according to Alex Intraversato, vice president of men’s and women’s merchandise. Like Renys, it is expecting strong holiday season sales but a decline for the entire year because its stores also were closed by the pandemic. Intraverso would not comment on how much sales might decline, but L.L. Bean had sales of $1.5 billion in 2019.

Intraversato said she already is seeing purchasing trends tied to working from home during the pandemic and that she expects to carry through the holiday season. The retailer has shifted to stocking more of the most popular items like slippers, sweatshirts, sweatpants and sleepwear as remote work has increased and many dress more informally for videoconferences.

“You can wear the top you’ve been wearing for years and then leggings or pants and slippers that are really comfortable,” she said. “We’ve been talking about it as the ‘above the keyboard uniform.’”

Another trend she expects to pump up holiday sales is clothing and equipment like snowshoes for outdoor activities. It follows a 400 percent boost in bike sales in May and June and an 80 percent rise in sales of outdoor furniture in April. Sled sales already were up 165 percent last week and snow boots were up 25 percent. L.L. Bean plans to hire 1,500 seasonal employees for its call center and order fulfillment centers.

While thinking of the holidays in September may be way too early for some consumers, Intraversato said it is best to shop early to make sure wanted items are available. With social distancing and other precautions in place, manufacturers are still trying to catch up to orders. The coming November election and issues at the U.S. Postal Service could drive mail delays.

Nationally, import figures also are giving positive signs for holiday sales. Imports surged to unexpected record-high levels this summer as the nation’s economy reopened and retailers stocked up for the holiday season, according to a report from the National Retail Federation.

It forecasts imports of 7.58 million 20-foot-long cargo containers during the July to October peak season when retailers bring in winter holiday merchandise, making 2020 the third-busiest peak season on record.

“This is the clearest sign yet that we could be in for a much happier holiday season than many had thought,” Jonathan Gold, a vice president at the retail group, said.