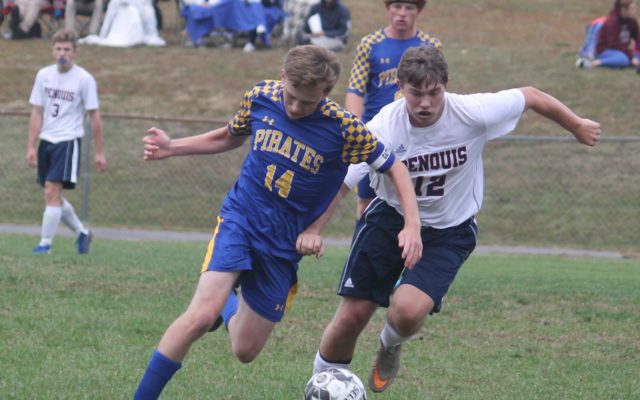 Stuart Hedstrom • September 9, 2020
GUILFORD — The decision is ultimately up to the Maine Principals’ Association, but if the organization gives the go-ahead for fall high school sports then Piscataquis Community Secondary School teams will be on the field as the SAD 4 school board gave its approval to the season during a Sept. 8 meeting at Piscataquis Community Elementary School.

GUILFORD — The decision is ultimately up to the Maine Principals’ Association, but if the organization gives the go-ahead for fall high school sports then Piscataquis Community Secondary School teams will be on the field as the SAD 4 school board gave its approval to the season during a Sept. 8 meeting at Piscataquis Community Elementary School.

“As you know it’s happening all over the world with the cancellation of sports at all levels,” PCSS Athletic Director Joe Gallant said. He said during summer workouts Pirate athletes and coaches have been following all the MPA guidelines, such as using individual soccer balls and field sticks and balls. Gallant credited his coaches for following up on players who missed a session to see if they might be sick or not.

“I’m very confident that if we are able to go forward my coaches and athletes are going to be safe following all the rules,” the athletic director said.

He said several schools across the state have already decided they will not be playing this fall, regardless of the MPA decision, including Sumner and Camden Hills. “I do believe Dexter and FA are 100 percent a go, Greenville is waiting on us,” Gallant said.

Schedules are still to be determined, but PCSS soccer and field hockey teams would play a reduced number of games from years past — likely 10 or four fewer — against a regional schedule with no postseason. Gallant said more details will be determined once a formal start to the season has been approved.

“We can only have 100 bodies at the event,” he said with this figure including players, coaches, officials and potentially security. Gallant said a Penobscot Valley Conference officials meeting two days later could decide whether to permit spectators at games or not, and if so specific fan policies will also be developed for PCSS by school officials.

When asked, Gallant said the district will look to stream games.

“I’m 100 percent on board with letting our students (play),” Levensailor said. “Parents can say no, the option is there.”

“(The MPA) did say since it is optional we can be more permissive with sports,” PCSS Principal John Keane said, such as six feet of distance needed in practices vs. the 14 feet required in physical education classes.

When asked, Superintendent Kelly MacFadyen said district buses can transport up to 26 per vehicle and Gallant said this number can accommodate the PCSS boys and girls soccer teams and the Pirate field hockey squad.

“Keep in mind that at any time the Governor or Department of Education (DOE) could pull the plug at any time,” MacFadyen added.

“If the state says no tomorrow this is a moot point,” Levensailor said.

In other business, the board heard reports from administrators.

“We have a total of 249 students at PCSS,” Keane said. He said of the grade 7-12 pupils, 208 are coming in every day the building is open and 41 are learning remotely full time.

MacFadyen said across the district 404 students are learning in-person and 106 are going with the remote option including 60-plus in K-6.

“I think the transition has gone very smoothly and I think in spite of (the coronavirus pandemic) they are happy to be down at the school,” Keane said about the grade 7-8 move down Campus Drive to PCSS for the 2020-21 academic year.

The principal said he has been asked about this year’s Athletic Hall of Fame induction, saying he and Gallant will be meeting soon with the nomination committee. Preliminary plans are to nominate a pair of classes, for 2020 and 2021.

He said the celebration for the Athletic Hall of Fame Class of 2020 would, hopefully, be moved to 2021 for the honorees from the two groups to be recognized together with a banquet and ceremony during Homecoming.

“We did open school, that was a pretty big success last week,” PCES Principal Anita Wright said. She drop-off and pick-ups have gone smoothly with students coming and going according to socially-distance protocols.

In her report, MacFadyen said several years prior a comprehensive high school project application between SAD 4, the Dexter-based AOS 94, SAD 41 of Milo, Greenville and Jackman schools and Tri-County Technical Center — the application is non-binding for the participants — was ranked third on the state scoring list behind a pair of Aroostook County projects.

“We know we were rated third, the No. 1 and 2 projects had been given permission to start their planning,” she said, with the second-ranked project in the Houlton area starting its planning about one year ago.

MacFadyen said during a meeting of the state board of education last month, the decision was made to move the SAD 4/AOS 94 project up to second and therefore allowing a start to the planning process.

She said AOS 94 Superintendent Kevin Jordan asked the DOE commissioner to consider the fact that school officials are in the midst of reopening amidst the pandemic and said planning cannot start until the end of September.

MacFadyen said this consideration should be made and “Kevin’s hoping by the end of this month we can start looking at how that planning may go.”

Under the Integrated, Consolidated (grade) 9-16 Educational Facility Pilot Project a regional comprehensive high school or possibly two or even three schools would be funded by the state with approximately ​$200 million set aside for the program. The facility is intended to serve as a model for the rest of Maine by encouraging neighboring school districts with declining enrollments to work together to combine resources and reduce costs.

The school would offer a variety of academic programs from high school to college — through the University of Maine and Maine Community College systems — and training and certifications in various industries via a number of business partnerships. Similar education models are used in other states.