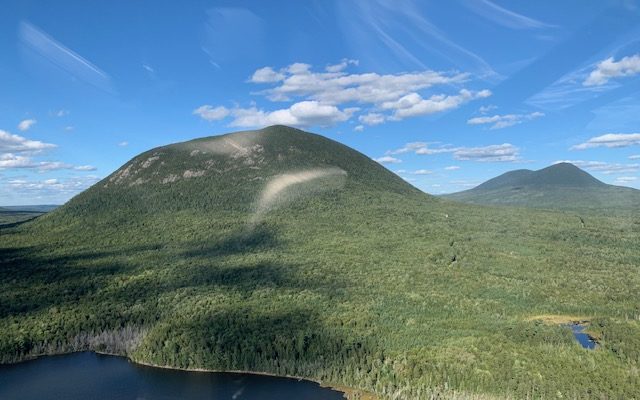 Searching my past while flying over Moosehead Lake

Ted Luebbers, Special to the Piscataquis Observer • September 7, 2020
I don’t really need a reason to go looking for a general aviation flight when I am traveling or on vacation. When I can come up with one, it makes the flight more interesting.

I don’t really need a reason to go looking for a general aviation flight when I am traveling or on vacation. When I can come up with one, it makes the flight more interesting.

My wife Joan and I have been spending the summer in Maine to escape the summer heat and humidity at our home in Tavares, Florida. It seemed that Maine is much better at controlling the COVID–19 pandemic outbreak than the Sunshine State. An added bonus! 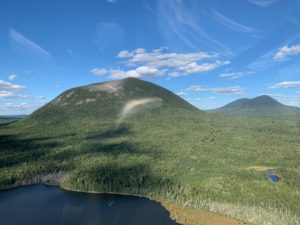 Earlier this summer we made a day trip to Moosehead Lake in Greenville, to checkout Currier’s Flying Service. The owner, Roger Currier, had been posting great photos of old flying boats of the 1920s and 1930s to my Facebook page which I enjoyed although we never actually met.

I figured this would be a good reason to make the trip to Moosehead and meet the man. Of course, while at it we could take one of their aerial seaplane tours of the area.

Unfortunately, all their scenic air tours were booked on that day and since it was a two-hour drive from our summer cabin on Pushaw lake in Glenburn, I didn’t know when we might be back. 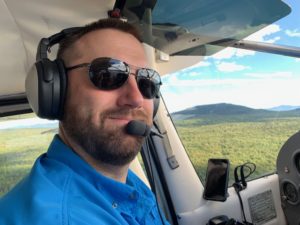 During the summer I was also doing some genealogy work about my family on Ancestry.com and talking with my sister to see what she remembered about our folks.

I discovered that in 1934 my father and mother had spent their honeymoon at a fishing lodge called West Outlet Camps on Moosehead Lake. I was born in 1935. Was it possible I was conceived in the back woods of northern, Maine? Maybe! Anyway, a reason to take a plane ride to visit that spot on the lake.

Then I remembered that one summer vacation in high school back in the early 1950s, I had a summer job with the Maine Forest Service. I was on a fire crew for five days fighting a forest fire on Spencer Mountain that borders Moosehead Lake. We would hike the mountain each day and construct fire breaks with shovels and grub hoes all day, then hike back down late in the afternoon. I learned what hard work was and how true exhaustion felt. 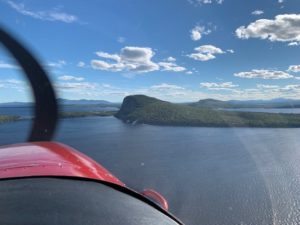 Photo courtesy of Ted Luebbers
HIGH ABOVE THE SUMMIT — Mount Kineo is on an island in the middle of Moosehead Lake, seen on a recent Currier’s Flying Service flight.

Seeing Spencer Mountain again will give me another reason for a flight over the area.

We watched the weather reports to pick a good flying day and finally made it back up to Greenville on Sept. 4 to make this nostalgic flight. It was a perfect day with just a few puffy clouds and a slight breeze from the northwest following the passage of a cold front the night before.

We boarded the flying service’s Cessna 180 and headed out. Roger Paradise, their chief pilot, opened the throttle, got the little seaplane skimming across the lake and raised the right wing a bit to get that float out of the water thereby reducing the water’s friction. We were soon airborne.

The views from the plane were spectacular. This lake is forty miles long and quite wide, with many islands and mountains right down to the shore line. Moosehead’s shore is well populated with cottages and docks. In the distance we could see several large mountains clearly including the famous Mount Katahdin, the end of the Appalachian Trail.

Closer to us were Big Spencer and Little Spencer mountains. I looked for evidence of the forest fire I mentioned, but it appeared everything had grown back quite well. Mother Nature had done her job during those intervening years.

As we continued to fly to the north, we eventually flew over Lobster Lake which is not as well populated as Moosehead. Our pilot mentioned that you have to fly-in or hike-in to get here. This is where some of their bush piloting revenue would come from. Here you would find the wilderness fishing or hunting camps.

At the northern turnaround point of the trip, Roger mentioned that we were about 35 miles south of the Canadian border and pointed out a distant mountain at that location.

After making a turn to the southwest and flying over the west outlet of Moosehead lake, he showed us where the West Outlet Camps used to be located. Back in the 1920s and 1930s the way most people got there was to take a train from Bangor to Greenville Junction, then go the rest of the way by boat. There were no roads around Moosehead lake at that time.

As we continued to fly back to base, we passed the 800-foot Mount Kineo with its rock face right down into the water.

Flying downwind of some of the mountains in the area, caused us to bounce around a little as the wind would create a little turbulence. But it wasn’t too dramatic.

We had a great flight with a very informative pilot guide. I got to see where I spent five grueling days of my youth and where my father and mother had spent their honeymoon.