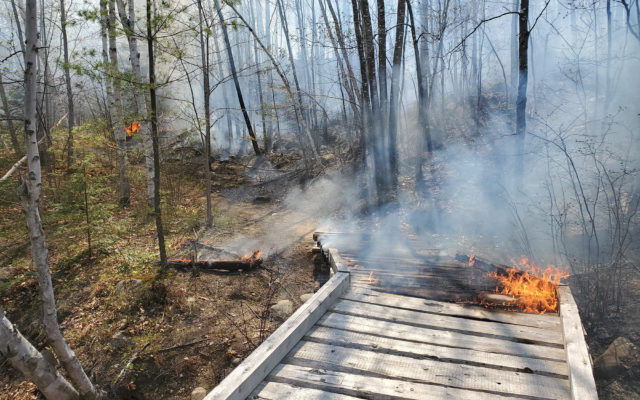 As Maine chief forest ranger Bill Hamilton spent a few minutes discussing campfire safety recently, much of the state baked on yet another 80-degree day, and Bangor-area lawns turned brown after weeks of little rain. Elsewhere in the state, Maine Forest Service crews were responding to five separate wildfires in the unorganized territories.

That’s just the kind of year it’s been, Hamilton said, and the state has already documented 712 wildfires, the second-highest total for an entire year in the past decade. Only 2016 (749 fires, according to Hamilton) was worse. This year’s fires have burned 871 acres so far.

And it’s still July, with typically warm and dry months ahead.

With camping season revving up after a pandemic-related slow start, Hamilton said focusing on campfire safety makes good sense. According to MFS statistics, there has already been a 170 percent increase in campfire-related wildfires this year compared to 2019.

Campfires can be one of the highlights of a summer excursion, but Hamilton said following a few guidelines can ensure their safety.

At commercial campgrounds and many other regularly used campsites, fires should only be set at predetermined sites that have been set up for campfires.

“Those designated sites have fire rings that have been constructed and inspected and there’s mineral soil [which lacks organic matter that might catch fire] underneath them,” Hamilton said. “The second thing we could do is keep fires small. If you’re going to boil tea, you don’t need a giant fire, and the same thing if you want to roast a marshmallow. “

One frequent problem: People think they extinguished their campfire, but didn’t.

“When you leave it, make sure it’s out. Dead out,” Hamilton said. “Some people let it burn down and there’s no visible flame left, but there’s still hot coals. They think that’s close enough. It’s really not.”

Making sure a fire is truly extinguished requires putting plenty of water on it, stirring the coals, then adding more water. When in doubt, put your hand near the soupy ashes and see if you feel any heat.

And of course, being cautious with any fire is advisable. Last month, the MFS stopped issuing online open burning permits for brush and wood debris, citing dry conditions, the high number of fires, and a staffing shortage.

Here are some other campfire safety suggestions from the Maine Forest Service:

Before considering burning, check mainefireweather.org for local fire conditions. The campfire should be at least 50 feet away from any structures and on level ground. Do not use accelerants to start your fire. Always have plenty of water on hand and tools available to put out the fire.

And don’t forget: Supervise children and pets near the fire and never leave your fire unattended.