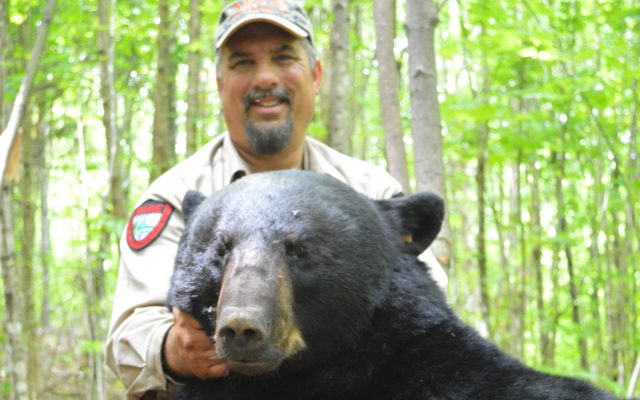 A Maine bear hunt might be just what you need this summer, whether you’re a hunter or not

John Holyoke, Bangor Daily News Outdoors Editor • July 22, 2020
The state’s wildlife biologists depend on hunters to help them reach publicly derived management goals for a variety of big game species. Included on that list is the iconic black bear.

The state’s wildlife biologists depend on hunters to help them reach publicly derived management goals for a variety of big game species. Included on that list is the iconic black bear.

Last week, the Maine Department of Inland Fisheries and Wildlife sent out a notice to prospective bear hunters, urging them to take part in this year’s hunt, and to consider hiring a Maine guide to help them have a successful hunt.

I’d vouch for the hunt-with-a-guide approach, as bear hunting in Maine is typically a labor-intensive pursuit that is dependent on someone (the guide, in most cases) regularly putting out bait that will hopefully draw bears when the season begins on Aug. 31.

Most bear hunters don’t live close enough to the woods they’ll hunt or have the time nor knowledge to serve as their own guides. The DIF&W said that 65 percent of the bears that are tagged in Maine have been taken by hunters using registered Maine guides.

And the department points out that this year ought to be a great one to take up bear hunting.

“Due to dry weather and cycles in natural food abundances, biologists predict bears will be more likely to frequent bait sites,” the DIF&W said in the press release. “If this is your first bear hunt, you couldn’t ask for more favorable conditions.”

To the department’s pitch, I’ll add a few words: “And it doesn’t matter if you’re a hunter or not.”

For a long time, I’ve been saying that I really don’t consider the tagging of a game animal an essential part of the hunt. To me, it’s more about the camaraderie, the experience, the adventure, and the memories made.

And bear hunting — even with a camera instead of a gun or bow — can be a perfect outlet for people looking to get outdoors and enjoy nature.

While some might discount this suggestion, or say it’s not feasible, I’ve seen firsthand that not all “bear hunters” come to Maine in order to kill an animal.

In fact, more than a decade ago I met some of the most avid bear hunters you’ll ever find, and was surprised to learn that a couple of them had no intention of shooting another bear, even though they made their annual trek to Allagash, bought their licenses, hired a guide, and dressed in camouflage when they went afield each afternoon.

They were there to capture video and still photos of bears. Period. One man, who’d filled his tag plenty of times in the past, said he always took a bow along, just in case the bear of a lifetime decided to visit, but he smiled when he told me he doubted he’d ever shoot a bear again.

“I just have too much fun watching them,” he told me.

After watching some of the video that he’d captured, I believed him.

Let’s be clear about one thing. Heading out on a photo safari won’t help slow the growth of the state’s bear herd. But it will do something else that’s vitally important: It’ll help out those guides and their families by providing them some much-needed cash during a really tough time.

The elephant in the room, of course, is this: There are plenty of people who are just philosophically against the hunting of bears, or the techniques that are allowed here in Maine.

I’m just saying if you’re looking for a way to get up close and get some great bear photos, there are plenty of guides who’d love to set you up on your own Maine photo safari.

There’s more than one way to hunt a bear, after all.

And in tough times, helping out your fellow Mainers seems like a pretty good idea to me.