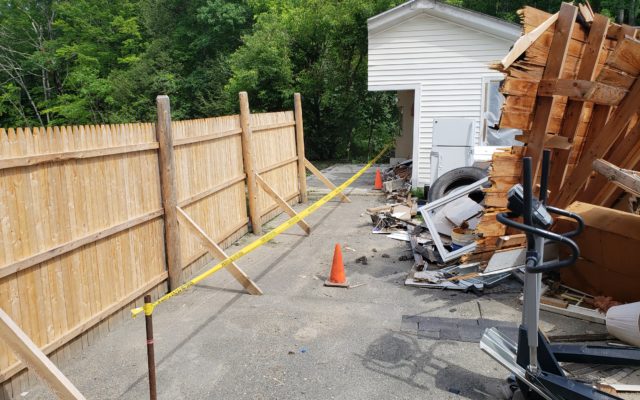 Ernie Clark, Bangor Daily News Staff • July 18, 2020
DOVER-FOXCROFT — A man who cut his neighbor’s garage in half with a Sawzall was on friendly terms with the man who built the structure — just not with everyone who lived on the property after he died.   Gabriel Brawn used a land surveyor’s demarcation between the two lots as a guide to remove the half of the building sitting on his land when a dispute over the boundary line boiled over.

DOVER-FOXCROFT — A man who cut his neighbor’s garage in half with a Sawzall was on friendly terms with the man who built the structure — just not with everyone who lived on the property after he died.

Gabriel Brawn used a land surveyor’s demarcation between the two lots as a guide to remove the half of the building sitting on his land when a dispute over the boundary line boiled over.

Tracy Brawn said July 16 that her husband’s actions on the day after Memorial Day marked the latest, and they hope the final, step of an often contentious relationship between her family, others in the neighborhood and various inhabitants of 148 Grove Street in recent years. 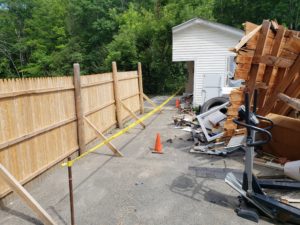 Bangor Daily News photo/Ernie Clark
STRUCTURE REMOVAL — This picture shows the remains of the garage at 148 Grove Street in Dover-Foxcroft after being cut in half during a property-line dispute. The posts and yellow tape depict the property line, while a fence has been erected in the driveway to define the separation between the abutting properties further.

Brawn and her family moved back to Dover-Foxcroft in 2012 to live in the home where her husband had grown up at 140 Grove Street — a property that once included the 0.23 acres just to the south that is now 148 Grove Street, where a small home was added several decades ago.

The Brawns’ relationship with their neighbors was fine until the former owner of 148 Grove Street, Steve Ritter, died in late 2016, Tracy Brawn said.

Ritter’s wife, Theresa Laythe-Ritter, took over sole ownership of 148 Grove Street. and while she became an infrequent resident, Brawn said relations have been strained with others who have rented or otherwise frequented the building since.

“When the dad [Steve Ritter] was alive this was a perfect place to live,” she said. “As soon as that poor man passed away this place turned to craziness and chaos.”

The Brawns unsuccessfully tried to purchase the 148 Grove Street property in one attempt to resolve their issues.

The property-line dispute gained momentum in April when the Brawns put down a load of wood chips near the previously established boundary with 148 Grove Street in order for a tractor to travel  the downhill grade to the back of their lot to clean up downed tree limbs.

Steve Ritter’s youngest son Blake soon planted a stake in the ground where the chips had been placed, Tracy Brawn said.

“He said, ‘This is our property, get your stuff off it,’ so we had to call a land surveyor,” she said.

The surveyor determined that the dividing line between the properties was in the center of the 148 Grove Street driveway — and right through the middle of the garage.

“The day the surveyor came and set the pins, the tenants that were there packed up and moved out that night,” Brawn said.

Another surveyor came up with similar results, and by Memorial Day Brawn said the younger Ritter asked if he could retrieve his father’s ashes from the 148 Grove Street garage.

“We said, please do. We want our property back because we’ve been paying taxes on it for years,” she said. “But he went over there and started throwing trash all over the place and smashing glass and taking bureaus and throwing them outside in the yard.”

The next day, Gabriel Brawn — who works in construction — took a Sawzall and skillfully cut down the half of the garage that was on his family’s property and left the remains on the other side of the surveyor’s line.

“There’s been a property-line dispute for a couple of months and obviously that was the result between Mr. Brawn and the owner of the other building,” Dover-Foxcroft Police Chief Ryan Reardon said.

Tracy Brawn said no one has been at 148 Grove Street for the last couple of weeks, and a recent look through the house’s front window revealed virtually no furniture inside.

The Brawns have installed a partial fence with cameras on their side of the 148 Grove Street driveway and plan to extend the divider to the brook at the rear of their lot.

Neither Theresa Laythe-Ritter — whom Brawn said had not lived at 148 Grove Street since last summer — nor Blake Ritter were immediately available for comment.

“We were aware of the situation and believe it’s been resolved at this point,” Reardon said.