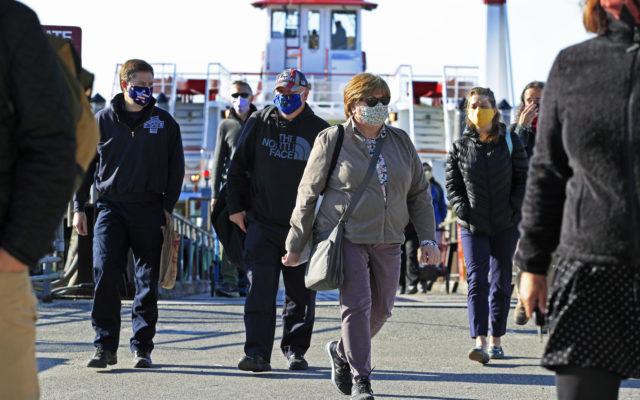 Gov. Janet Mills issued an executive order to prevent the spread of the new coronavirus. The goal is to boost enforcement of a previous statewide order to wear face coverings in public when physical distancing is difficult.

The order requires businesses to enforce the face covering mandate, but it applies only to certain businesses in certain counties and cities. Some Mainers who work in health care say the patchwork approach does not go far enough.

Wearing a mask is a given where Dr. Joseph Babbitt works. He is an emergency department physician at Northern Light CA Dean Hospital in Greenville. But when Babbitt steps out into the community, it is a different story.

“In the areas where I live and work in the Greenville area, mask use is low,” he said.

That is why Babbitt is disappointed that Mills’ order does not apply to the county where he lives, Piscataquis. Instead, it applies to seven Maine coastal counties from York to Hancock, as well as the cities of Bangor, Brewer, Lewiston, Auburn and Augusta. The order focuses on areas that attract tourists and have larger congregations of people, according to the Mills administration.

But Greenville is also a tourist destination. Babbitt said the population has already more than doubled this summer. And since a previous order in April requires face coverings statewide, he does not understand why the latest enforcement effort is not also statewide.

“It’s more confusing, it’s less consistent and it also, to me, sort of promotes the psychology of, well, there are appropriate times when it’s not necessary for some people, or some populations, or some settings to be safe,” Babbitt said.

“I do wish it was across the state,” Hutches said. “You know, enforcement across the board may be easier and help the community understand the seriousness of the disease.”

The order also applies only to certain businesses in the designated counties and cities — specifically lodging establishments, restaurants, outdoor bars and tasting rooms, as well as retailers with more than 50,000 square feet of shopping space.

The Mills administration said it is optimistic that stores across the state will increase enforcement in the wake of the executive order.

Though the enforcement order is not universal, some health care professionals said it is a positive step.

“I think that the order was good. I think it would be nice if it were statewide,” said Patty Hamilton, the public health director for Bangor.

Bangor is included in Mills’ enforcement order, but the county it sits in, Penobscot, is not. Hamilton suspects that Mills needed to be strategic when considering how to enforce face coverings.

“The mandated part, I think, is the tricky part, and that’s the part people are getting a lot of pushback on,” Hamilton said.

At Bangor-based Northern Light Health, Dr. James Jarvis said he hopes that the order will help exert positive peer pressure to wear face coverings to prevent the spread of COVID-19, the illness caused by the coronavirus.

“There’s literature from the health community and research department that really support that and show that in areas where people have embraced using social distancing and face coverings, that the number of cases of disease have gone down,” Jarvis said.

Babbitt, from Northern Light CA Dean Hospital in Greenville, said he is dismayed that more people in his community are not wearing masks. It may be because, on paper, Piscataquis County looks relatively untouched by COVID-19. But Babbitt said the disease is there.

And some of those patients, Babbitt said, had COVID-19. He wishes people would remember that wearing masks is not about protecting yourself — it’s about protecting others. He says a universal policy might better help drive that message home.