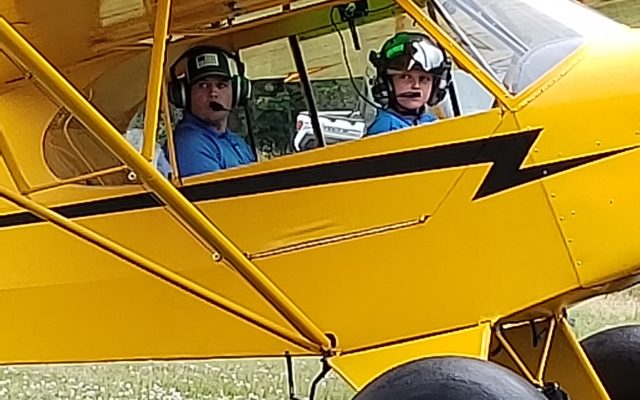 Ernie Clark, Bangor Daily News Staff • June 30, 2020
Saturday’s fly-in at the Charles A Chase Jr. Memorial Field Airport was a chance for pilots to feed their competitive urges while aviation fans spent an afternoon outdoors pumped up by the roar of airplane engines.

Saturday’s fly-in at the Charles A Chase Jr. Memorial Field Airport was a chance for pilots to feed their competitive urges while aviation fans spent an afternoon outdoors pumped up by the roar of airplane engines.

This year’s Northeast STOL — Short Takeoff and Landing — Series stop in Dover-Foxcroft also marked a comeback of sorts for the grass airstrip that rises above the south side of town.

Last fall the 70-acre site was being considered as a possible home to a municipal solar power project. But the family that donated the airfield to the town and the region’s pilots voiced their opposition, so the board of selectmen voted to focus on an alternate site for the solar project. 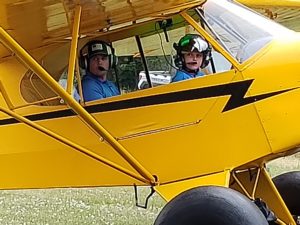 Bangor Daily News photo/Ernie Clark
FATHER, SON FLIGHT — Nine-year-old Jacoby Parrott (front) and his father, Jake Parrott, both of Harrison, await the take-off signal during the Northeast STOL Series event held Saturday, June 27, at the Charles A. Chase Jr. Memorial Field in Dover-Foxcroft. The plane is a 1941 Piper J-3 that originally was used in Bridgeport, Connecticut, to train World War II glider pilot. Jake Parrott is able to control the flight from the rear seat.

“We were able to keep the airport open and it’s a great thing for the area,” said Chris Arno, a local pilot and organizer of Saturday’s flying contest, which was free to the public. “We’re able to have events like this, and it’s not just us and these events, but once this airport goes we’re never going to get another one in town.”

The airfield was donated to the town in 1961 by Ruth W. Chase and C.A. Chase in memory of their son Charles A. Chase Jr., who had built the field and used it as a base of operation. Charles A. Chase Jr. was killed on Dec. 18, 1959, while flying from the site.

Arno said the runway also serves as an alternate landing zone for LifeFlight, a refueling base for the Maine Forest Service when it battles forest fires in the area and a safe landing point for pilots that are having plane troubles.

Saturday’s first-time STOL event in Dover-Foxcroft attracted 10 pilots eager for a competition that began among the bush pilots of Alaska, with its blend of pilot skills and aircraft performance growing in popularity nationwide in recent years. 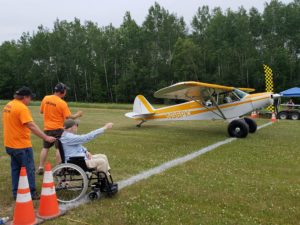 Bob Bradeen of Sterling, Alaska, was the winner at 268 feet, followed by John Hartz of Cape Elizabeth at 293 feet and Tom Ford of Loudon, New Hampshire, at 377 feet.

But for the pilots, the chance to merely compete was the big attraction in a year when many larger competitions have been canceled in the wake of the COVID-19 pandemic.

“Ordinarily by the first of June I’d be flying down to Pennsylvania to a fly-in in Lock Haven, but there’s several that have been canceled this year, which is disappointing,” said Brian Daggett, a pilot from Rockland. “I think we all needed this sort of thing. It lifts our spirits.”

The event originally was scheduled in conjunction with the annual Maine Whoopie Pie Festival until that event — which draws from 8,000 to 10,000 people to Dover-Foxcroft each June — was rescheduled for Oct. 3 due to the pandemic.

But with a much smaller turnout anticipated for the fly-in — 100 to 150 plane watchers were spread along the 7-acre runway — the STOL competition was held.

“We tried not to harp on COVID and everything going on politically or anything like that,” Arno said. “We just wanted to have a fun event for the pilots first. The pilots were really itching to do something because everything else has been canceled.”

Participants in Saturday’s competition — another STOL event is scheduled for July 11 in Pittsfield — said the series fits sites like the Chase field, particularly this year when so many larger events have been canceled.

“This is a good thing for small grass strips and small airports in general because the public can get up close to the airplanes, and the organizers have been flexible because they know they’ve got a good group of pilots and they know people want to get out and do things,” said Jake Parrott, a pilot from Harrison.

Arno said the Dover-Foxcroft airfield tentatively is scheduled to host a “Young Eagles” event on Oct. 3. Young Eagles is a program created by the U.S. Experimental Aircraft Association to give youngsters ages 12-17 an introduction to aviation, and more information is available by accessing eaa.org.

There also are plans to bring the Northeast STOL Series back to Dover-Foxcroft in 2021.

“Everybody loves airplanes, everybody loves to come see airplanes and we had a good competition,” Arno said. “It turned out to be a great event and we hope to make it bigger and better next year.”

Saturday’s event marked the largest gathering of pilots at the airstrip since early November, when talk was building about converting the site into the home of a 4- or 5-megawatt solar power project.

That was followed by a 65-minute public hearing that preceded a Nov. 12 selectmen’s meeting and featured 23 speakers and more than two dozen emails, all supporting the airport.

“The town is looking at other sites for solar power for now and hopefully forever the airport is going to be off the charts,” Arno said.