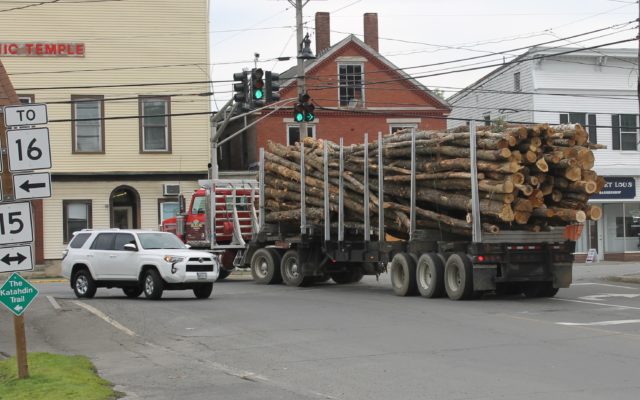 Stuart Hedstrom • June 15, 2020
Solutions will not happen overnight but some changes could be made to improve downtown Dover-Foxcroft for vehicular and pedestrian traffic alike. Nearly a year ago the town began to look for some possible solutions for the stretch of road where East Main, Pleasant, South, West Main, North and Lincoln streets converge having agreed to use up to $25,000 for the municipality’s 50/50 share with the Maine Department of Transportation (MDOT) on a cooperative agreement for a traffic study. The downtown includes the major routes to Bangor, Dexter, Milo and Greenville. Gorrill Palmer Consulting Engineers Inc. of South Portland came on board as a consultant.

DOVER-FOXCROFT — Solutions will not happen overnight but some changes could be made to improve downtown Dover-Foxcroft for vehicular and pedestrian traffic alike.

Nearly a year ago the town began to look for some possible solutions for the stretch of road where East Main, Pleasant, South, West Main, North and Lincoln streets converge having agreed to use up to $25,000 for the municipality’s 50/50 share with the Maine Department of Transportation (MDOT) on a cooperative agreement for a traffic study. The downtown includes the major routes to Bangor, Dexter, Milo and Greenville. Gorrill Palmer Consulting Engineers Inc. of South Portland came on board as a consultant.

“We had an initial public hearing in September and we talked about having a second public hearing in the spring,” Town Manager Jack Clukey said during a June 9 hearing conducted on Zoom. “This is not the public hearing we were expecting. We thought it would be in late April and in person.”

Mentioning how the community is working with MDOT and Gorrill Palmer Clukey said, “We initiated the process in September with a kind of a walk-through in the downtown and then a kind of public concerns meeting.”

The session drew nearly 40 attendees. Concerns raised included tractor trailer trucks turning on the narrow streets, where pedestrians can safely cross and deteriorating asphalt and cement on the road and sidewalks.

“We are looking at feasible ways to kind of address those issues,” Clukey said.

Randy Dunton of Gorrill Palmer said “there was a lot of data collection, traffic counts, data capacity studies” to go into a Dover-Foxcroft Urban Area Transportation Study with additional feedback to be incorporated into the document.

“What we are going to talk about tonight isn’t going to happen overnight, it will be a phased approach,” he said, mentioning the current version of the traffic study is available at dover-foxcroft.org.

“None of the downtown ramps were found to be ADA-compliant so there’s none that do not need some work,” Dunton said. “We recognize parking is at a premium,” he added, saying another aim is to create spots to account for spaces lost to improve visibility at the turn from Summer Street onto North Street.

Dunton identified deficiencies such as lack of crosswalks and/or accompanying pedestrian signals, curbing by parking lots, a set of stairs connecting stretches of sidewalk near the Moosehead property and a tight corner by the intersection of East Main and South streets which has staggered stop lines for traffic coming off of South Street.

“What I have heard, especially from locals, is this causes confusion,” Dunton said. He mentioned those unfamiliar with the area looking to turn left at the end of Summer Street will pull up even to the right turning lane. This then leaves tractor trailers turning right from East Main Street with little to no room to maneuver.

“The second issue is pedestrians waiting by this corner,” he said. Dunton said pedestrian crossing signals have been knocked down over the years by large trucks taking a right off East Main Street.

“The other area everybody talks about is in front of the fire station,” he said. In this downtown spot Pleasant Street ends by East Main and South streets and there are several islands and turning lanes, even before emergency vehicles come out of the station and into traffic.

“Whenever you create a confusing situation it’s unsafe for vehicles, it’s unsafe for pedestrians and bicycles,” Dunton said. He said the downtown area also has items, such as items for flower planters, placed in the middle of the sidewalks.

The Gorrill Palmer official said information gathered will be compiled for future scenarios. He said these include the installation of ADA-compliant ramps at all crosswalks which will also direct footpaths and many would include push buttons with audio signals.

“Our goal for updating the traffic signal system is to hopefully time it to make it more efficient than it is today,” Dunton said.

He added that a portion of the stairs by the East and West Main intersection would be converted into a 5-foot-wide ramp.

Under a pair of proposals, the Chase & Kimball Oil building at the corner of East Main and South streets would be acquired to make room for turning traffic. Dunton said the proposals involve a yield sign or a traffic light, and the staggered stop lines would then be made consistent. Pedestrian crossings would be made easier under any adjustments to the location.

“By acquiring that property it gives us the ability to adjust the turn radius to meet the needs of the traffic we may have,” said MDOT Active Transportation Planner Patrick Adams. “The luxury we have is to pull that radius back. This will do the job of slowing that traffic down through town.”

He said by the fire station a section of road at the end of Pleasant Street would be taken out to create a green space.

“What you are really doing is setting up traffic so everybody knows where to go, where the entrance is, where the exit is,” Adams said. He explained raised concrete would slow regular vehicles, if not keep drivers off, but would pose no problems for fire trucks to allow the department to get right out of the station.

“I think there will be different projects that come about,” Clukey said about everything that was discussed. He said whenever possible traffic improvements would be coordinated with other work, such as storm drain and water and sewer projects.

“There’s ways to partner and cost save,” he said. “If we have these things we can approach MDOT on a cost share.”

Select Vice Chair Cindy Freeman Cyr said comments from the public can still be made and these will be incorporated into final recommendations. She then wondered if it is up to the community to establish priorities and set funding.

“I think it’s all these things,” Clukey responded. “We have solutions to problems in this report and then it’s where do we want to start?”