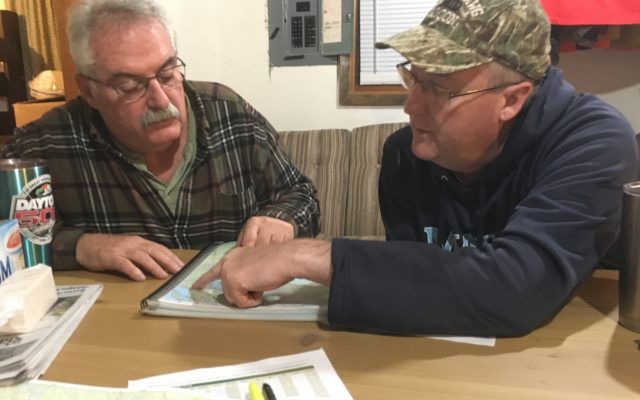 Moose hunt memories last long after the hunt is done

John Holyoke, Bangor Daily News Outdoors Editor • June 12, 2020
On Saturday, as has become an annual affair, the Maine Department of Inland Fisheries and Wildlife will draw the names of this year's crop of lucky moose hunters. Unfortunately for this year's crop of permit-winners, this permit lottery won't be an in-person event attended by hundreds. Thanks to the COVID-19 pandemic, it'll be held virtually, and streamed online instead. That means that when hunters start shrieking and cheering when their name is drawn, hundreds of strangers won't start cheering for them, as has also been the custom.

On Saturday, as has become an annual affair, the Maine Department of Inland Fisheries and Wildlife will draw the names of this year’s crop of lucky moose hunters.

Unfortunately for this year’s crop of permit-winners, this permit lottery won’t be an in-person event attended by hundreds. Thanks to the COVID-19 pandemic, it’ll be held virtually, and streamed online instead. That means that when hunters start shrieking and cheering when their name is drawn, hundreds of strangers won’t start cheering for them, as has also been the custom.

But here’s hoping that when those moose hunting seasons begin in September, this year’s hunters can get out and enjoy as normal a hunt as possible, and make memories that will last them a lifetime.

Having been a lucky winner (or the friend of a lucky winner) more than once, I can vouch for the special nature of the hunt, and I still cherish those memories made in the Maine woods.

I was the first of my group to be selected for a hunt, as my name popped out of the cyber-hopper early on in the 2006 drawing. I was on hand in Scarborough to cover that lottery, and found myself besieged by other members of the media who were looking for a lucky moose hunter to interview.

“I haven’t been in the lottery enough years to deserve this,” I remember telling one TV crew. “But you never know when it’ll happen again, so I guess I’ll take it.”

At that point, I didn’t really know much about moose hunting, but I did have a group of buddies who knew a lot more than I did. And during that hunt, which we spent on the gravel roads of Wildlife Management District 4, north of the famous Golden Road, I learned more than a few things.

Chief among those lessons is one that I still hold dear today: When one person in the hunting party succeeds, we all succeed.

As soon as my moose hit the ground, two things happened in rapid succession. First, a non-hunting pal, the BDN’s Pete Warner, told me that after watching the hunt unfold, he was ready to become a hunter himself. (He did). Second, we all made a pact: Should any of our group be drawn in the future, we’d all drop everything to pitch in and re-create this original hunting party.

And that’s exactly what we’ve done.

A couple years later, my friend Chris Lander had his name drawn for a permit, and we all got back together for another try in WMD 4. He was drawn for a month-of-November hunt a few years after that, in the largely moose-less (or so it seemed) WMD 26. I cashed in again in 2017, over in WMD 8, west of Moosehead Lake. And last year, after a 39-year wait, Chris’ brothers, Billy and Tim Lander, got a moose permit and filled a tag of their own, also in WMD 8.

That’s five permits (and four moose) over a 14-year period. That, I figure, makes us pretty lucky. And believe me: We all appreciate that good fortune, and the experiences we’ve shared in various moose camps.

Tim and Billy have earned their reputation of being the most knowledgeable woodsmen among us, and they’ve helped us find some of the best moose habitat we could have hoped for. On my first hunt, they were nearly 100 percent responsible for me filling my tag, as they sniffed out a fragrant moose wallow at the end of a grassy winter road, scouted it for a bit, and told me that I simply had to hunt that spot the next morning.

I did. I called. The moose stepped onto the road 49 yards away (yes, I paced it off afterward). And the hunt was over.

We’ve shared meals and a few drinks while sitting around a woodstove, and plotted the next day’s movements while poring over our DeLorme’s Maine Atlas and Gazetteers. We’ve circled back from scouting missions for side-of-the-road meetings where we’ve changed plans on the fly. We’ve laughed a lot.

And we’ve appreciated the friendships that we’ve developed, in large part, because we’ve spent these special times in the woods together.

On Saturday, a new crop of hunters will hear their names drawn. They’ll get to gear up, make grand plans with pals, and come fall, they’ll take to the woods.

Here’s wishing them all the good luck that my buddies and I have enjoyed.

My advice to them: Go make memories.