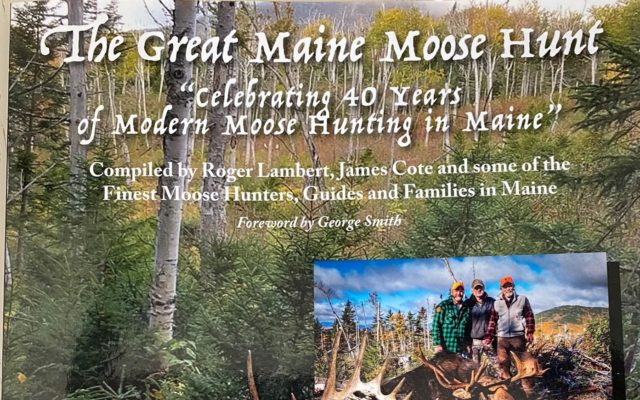 John Holyoke, Bangor Daily News Outdoors Editor • June 11, 2020
Experiences like those are the focus of "The Great Maine Moose Hunt, Celebrating 40 Years of Modern Moose Hunting in Maine," a new book that features moose tales from 19 registered Maine guides or avid moose hunters. Lambert and friend James Cote compiled the stories that will ring true to any who have been drawn for a permit, recruited friends, and headed into the vast Maine woods in search of their own hunt of a lifetime.

Roger Lambert has learned that there’s just something special about a Maine moose hunt in his years as a hunter and guide.

Part of it, he said, is that when it comes to moose hunting, many believe that the more people you have in your hunting party, the more memorable the hunt will be.

“This is a multi-generational thing, it’s a festival of people, they book into sporting camps, they set up their tents. It’s different. It’s a wonderful thing, and people never forget those experiences,” Lambert said.

Experiences like those are the focus of “The Great Maine Moose Hunt, Celebrating 40 Years of Modern Moose Hunting in Maine,” a new book that features moose tales from 19 registered Maine guides or avid moose hunters. Lambert and friend James Cote compiled the stories that will ring true to any who have been drawn for a permit, recruited friends, and headed into the vast Maine woods in search of their own hunt of a lifetime.

Lambert said that he figured there would be interest in a book like this, consisting of relatable hunting stories.

“There’ve been how-to books written, but nobody had written about the hunt,” Lambert said.

Lambert reached out to guides and hunters to invite them to submit accounts of their hunts, and assembled them into a 132-page volume with plenty of impressive photos from those hunts.

He said he and the other writers featured share one trait: They all like to talk about their hunts.

The result is an unpolished but charming book that at times reads like the journal or logbook you’d find at a remote hunting camp. The details of hunting successes and failures are included, as well as plenty of details about who tagged along, who performed which chores, and how the hunting party extracted their moose from the woods.

Among the highlights: Guide Brett Patten’s poignant account of a client who continued his moose hunt after his own brother died in the woods on the first day of that hunt, and Dennis VanDeusen’s humorous account of what it takes to be a “Camp Jack,” responsible for cooking, building fires, and untold other duties.

“It has been my experience,” VanDeusen wrote, “that the evening meal is the most important gathering of the day during moose camp. All members of camp are usually present, and a recap of the day’s events afield are retold. It should be noted that the first telling of any of the day’s events is the most accurate, and that after time the stories tend to expand on the details somewhat.”

Lambert said he’d long wanted to produce a book like this, and finally decided to take the plunge.

“A lot of people had been after me, saying, ‘Rog, you ought to put pen in hand and do this,’ and I knew I wasn’t capable of doing it by myself, but I sure as hell knew there were other people who felt about it the same way that I did, and if I could pull this together, and coordinate it a bit, then I ought to do it,” he said.

Lambert has come to understand that there are plenty of Mainers who’ve spent a lot of time studying moose and their behavior, and who know how to stage a memorable hunt.

“There are families that are as good moose hunters as any guide in the state,” he said.

When those families take to the woods in search of a moose, Lambert figures they’re playing hunter-gatherer roles like Mainers traditionally have.

“We’re only two or three generations from surviving [by] pickling suckers and harvesting blueberries and pressing cider. We’re not far away from that. You had to do those enterprises to survive,” he said.