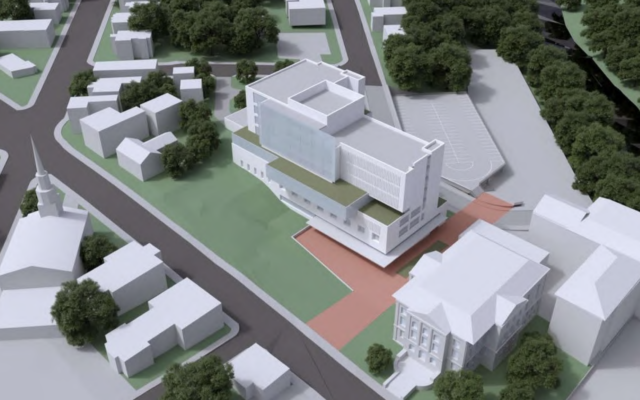 Judy Harrison, Bangor Daily News Staff • June 11, 2020
Penobscot County voters will not be asked in November to approve funding for a new jail as officials consider whether operational changes imposed by the COVID-19 outbreak will become permanent. It could be November 2021 before the measure appears on the ballot.

Penobscot County voters will not be asked in November to approve funding for a new jail as officials consider whether operational changes imposed by the COVID-19 outbreak will become permanent. It could be November 2021 before the measure appears on the ballot.

Commissioners in February delayed a vote on the proposed $65 to $70 million facility, from the primary election — now set for July 14 — until the Nov. 3 general election.

That plan called for an eight-story, 250-bed jail in a 116,879-square-foot building, to be constructed where the former YMCA is located on Hammond Street in Bangor. The height and size of that proposed facility was highly criticized.

In February, commissioners took a pause in the consideration process.

A month later, the coronavirus outbreak shut down much of the state and caused Sheriff Troy Morton and other jail officials throughout Maine to reduce inmate populations by about 40 percent.

On May 26, commissioners agreed to postpone a vote on any new facility until next November.

Commissioner Laura Sanborn of Alton, who supports building a new jail, said the county could not have a new plan ready to present to the public by this November.

“I think we have to regroup,” she said. “I think we need better numbers on how many people will need to be in jail once the courts open back up.”

“A lot of the world has changed and there are a lot of factors to consider that weren’t present a few months ago,” Baldacci said.

Cushing said that commissioners need more input from city officials and the public before presenting a new plan to the voters.

As of June 9, there were 160 inmates housed at the jail, licensed for 157, with 30 boarded out at other facilities and 109 on bail being supervised by Maine Pretrial Services, a private company, according to Sheriff Troy Morton. In the recent past, the jail has boarded out as many as 90 inmates. The county budgeted $1.1 million this year to pay boarding fees but is not expected to spend it due to COVID-19 reductions in the jail population.

As the courts slowly return to normal operations and the pandemic subsides, it is uncertain whether judges will be as willing to allow people to be released on low bail with supervision as they have been during the outbreak.

Commissioners, who are to meet in-person on Tuesday, June 15 for the first time since mid-March, have not set a date for a meeting with the jail advisory committee. That group worked for more than two years on a proposal to reduce the need for the county to board inmates out to other jails and to increase space for programming, private interviews and medical care.