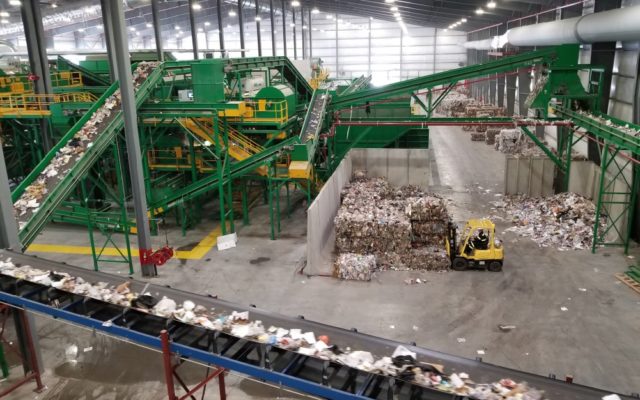 Charles Eichacker, Bangor Daily News Staff • June 10, 2020
The new waste plant in Hampden has had to temporarily close this month as it struggles to pay its expenses and faces a new lawsuit from a contractor that alleges it’s owed at least $1.2 million for staffing and running the facility.

The new waste plant in Hampden has had to temporarily close this month as it struggles to pay its expenses and faces a new lawsuit from a contractor that alleges it’s owed at least $1.2 million for staffing and running the facility.

That closure has forced the 115 communities that normally send waste to the Coastal Resources of Maine plant to instead divert it to landfills, as they have had to do multiple times over the past two years as the facility opened late and then in fits and starts.

The latest closure has also prompted a warning from the organization representing those communities that the plant is violating its contractual obligations and has 30 days to fix the situation. That violation notice is a step toward the organization, the Municipal Review Committee, terminating its contract to have its members send their waste to Coastal Resources of Maine.

The Coastal Resources of Maine plant has been seeking a $14.7 million loan to help pay its bills and make operating improvements after it had trouble bringing in revenue during its first six months of commercial operation, which began in November 2019.

But delays in securing those funds have forced the company to take “the unfortunate step” of temporarily closing, said Shelby Wright, the company’s director of community services. As a result, communities started having to divert their waste to landfills in Norridgewock and Old Town on May 28.

The temporary closure comes as the company that staffs and runs the facility, NAES Corp., has largely stopped its work there.

In a lawsuit filed Monday, NAES Corp. alleged that the Hampden plant owed it at least $1.2 million for staffing and operating the plant. It said that it has already “ceased substantial work” and “expects to wind-down all work at the Facility by July 1, 2020.”

NAES, which is based in Washington state and specializes in running energy facilities, was retained by the plant late in 2017 to manage its daily operations, according to its lawsuit. After the plant officially opened last year, NAES employed as many as 55 people there at one time.

But because Coastal Resources of Maine owes the company more than $1 million — largely for employee wages and benefits — NAES has had to pay its workers out of its own pocket, according to its lawsuit.

“NAES cannot continue to work without pay,” Dean Blaha, the company’s vice president of operations, said in a statement. “We hope to resume work at the facility as soon as Coastal Resources can pay for work already completed and the work ahead.”

Wright said that she had not heard of the lawsuit until Wednesday and declined to specifically comment on it.

Last week, the Municipal Review Committee warned the Hampden plant that it is defaulting on its contractual obligations to the 115 communities that send waste there and gave it 30 days to come back online, according to Sophie Wilson, the town manager of Orono and an MRC board member who explained the changes during a recent town council meeting.

If that doesn’t happen, Wilson told Orono councilors that the community could consider exiting its contract and looking for another waste disposal arrangement.

“We still have a relatively high degree of confidence that this project can be made to work and that there are funders behind it that will allow it to work,“ Wilson said. “At this point, I have every confidence that we will be able to move forward and that this is temporary. I know there is a lot of work happening behind the scenes to find a solution that we would all agree with.”

On Wednesday, Wilson referred questions about the notice of default to Carroll, who did not specifically respond to a request for more information.

In a statement, Carroll said that the group is “working closely with all stakeholders to ensure that our members see minimal disruption in service and, ultimately, to secure and establish the funding and personnel necessary to operate the plant at its full potential.” He also said that the plant’s current issues “are financial, organizational, and fixable. They are not technological. With the right operator/management, the plant will operate as it was fully envisioned.”

The Municipal Review Committee extended a $1.5 million loan to Coastal Resources earlier this year so the facility could make improvements after bringing in less revenue than expected in its first months of full operations. But the committee still has not been paid back, Carroll said.

Since opening for full commercial operations in November, the Hampden plant has had trouble bringing in revenue in part because it was unable to secure state environmental permits to sell off the cellulose pulp and plastic fuel briquettes that it makes from waste. Besides losing out on the revenue, that also forced Coastal Resources to pay more to landfill those products.

But the company finally managed to secure those permits at the end of May, and it also broke records for how much waste it processed that month, according to Wright.

“It’s ironic,” Wright said. “Performance-wise, the plant is actually on the cusp of great success, which makes this all the more difficult and unfortunate for the folks that work at Coastal Resources as well as the communities that we service.”

Maine jails recorded at least 837 private phone calls between attorneys and their incarcerated clients in the past 12 months, potentially violating state law in the process.