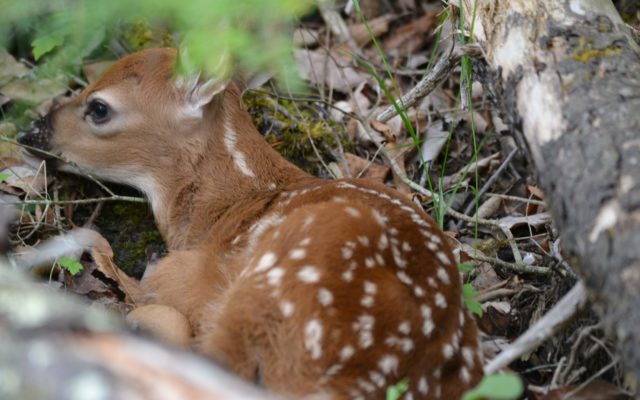 Aislinn Sarnacki, Bangor Daily News Staff • June 9, 2020
While Naisbitt was startled to find the fawn lying so close to a well-traveled trail, her experience wasn’t that unusual. In Maine, people often stumble upon baby wildlife, especially in the spring and early summer. As a result, the Maine Warden Service and state biologists field a multitude of phone calls about wild animals that people worry have been abandoned or orphaned this time of year. And their message is always the same: If you care, leave it there.

While recently walking along a hiking trail in Blue Hill, local resident Landere Naisbitt came across a wonderful sight. Curled beneath a fir tree just a foot or so from the path, a baby deer lay hidden — almost. While some hikers passed the tiny fawn without noticing it, Naisbitt spied its dappled coat and stopped in her tracks.

“It was such a beautiful surprise,” said Naisbitt, who had been walking with a friend at the time. “We tried not to stay long at all. We saw it, took a photo, whispered a little bit and backed away. I’m sure it was scared or nervous, but it didn’t move. It was doing what its instinct told it to do.”

While Naisbitt was startled to find the fawn lying so close to a well-traveled trail, her experience wasn’t that unusual. In Maine, people often stumble upon baby wildlife, especially in the spring and early summer. As a result, the Maine Warden Service and state biologists field a multitude of phone calls about wild animals that people worry have been abandoned or orphaned this time of year. And their message is always the same: If you care, leave it there.

“If someone is worried a fawn has been abandoned, we generally tend to let [the fawn] sit and we monitor it,” said Keel Kemper, wildlife biologist for the Maine Department of Inland Fisheries and Wildlife. “We’re happy to intervene if it’s necessary, but intervention usually isn’t necessary.”

It’s natural for a fawn to bed down and hide while its mother forages for hours, Kemper said. In fact, baby deer are designed to do just that. Their coats easily blend into their surroundings, and they don’t give off any scent that could attract predators.

If an animal is truly abandoned or injured, human intervention typically means transporting the animal to a licensed wildlife rehabilitator, which are listed by county on the Maine state website. Wildlife rehabilitators have studied and trained to care for specific species, plus their enclosures for housing animals have been inspected by the state, and they have access to veterinarians that may be able to help them treat injuries.

Possessing a wild animal without a state wildlife rehabilitation license is illegal in Maine. This law is for the safety of the public, as well as wildlife. Certain animals can carry dangerous diseases, such as rabies. And each species has complex needs for survival and rehabilitation, which has an end goal of releasing that animal back into the wild.

“We’ve got some good [wildlife rehabilitation] facilities in the state, along with mom-and-pop ones where people are licensed to rehabilitate certain wildlife species at their homes,” Kemper said.

Fawns account for many of the phone calls that state biologists and game wardens receive this time of year. But they are also called about a variety of other wild baby creatures, including baby birds, racoons, squirrels and foxes.

“It just seems like everyone and their brother has a fox and a set of pups living underneath their barn or doorstep,” Kemper said. “They’re calling about seeing the pups and invariably they don’t see the parents because they’re too busy hunting. They think the pups have been abandoned.”

In a fox family, both the adult male and female will hunt for hours at a time, leaving their kits alone in their den, Kemper explained. So in most cases, the best thing to do is leave them be.

Meanwhile, Maine’s largest wild bird rehabilitation facility, Avian Haven in Freedom, is extremely busy throughout the month of June with injured and abandoned baby birds. But again, baby birds — even if they’ve fallen out of a nest — don’t always need to be rehabilitated. Sometimes the solution is as simple as gently picking them up and placing them back into their nest.

“That whole notion that the mother is going to leave it because she smells your hands, that’s an old wives’ tale,” Kemper said. “She’s very committed to those babies.”

If you find a baby bird that you’re worried might be injured or abandoned, there are a number of online flowcharts and bird rescue guidelines that can help you decide what to do. Each scenario is different. For example, if baby birds are in a nest but you are worried they might be abandoned, take the time to monitor the nest from afar to see if the parents return. This may take some time. And beware that if you’re stationed too close to the nest, that may prevent the parent from returning.

“As the nestlings get older, the frequency of parental visits diminishes,” said Diane Winn, co-founder of Avian Haven. “It’s rarely possible to watch a nest constantly, so mom and dad may be coming to the nest just long enough to feed the kids, and then they’re off again to hunt for more food.”

In general, if you come across a healthy young wild animal, the Maine DIF&W advises you leave it alone. If you have pets, put them inside your home or on a leash so they don’t disturb the animal. And if you have reason to believe the animal has been orphaned or injured, call your local DIF&W biologist or game warden for help.

For more information about dealing with orphaned or injured wildlife, check out the Maine DIF&W website at maine.gov/ifw/.