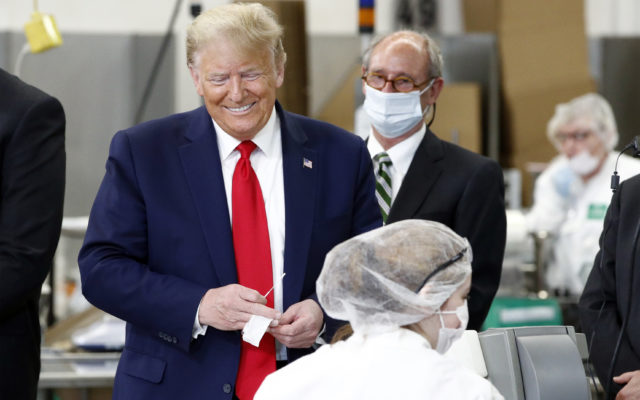 Charles Eichacker, Bangor Daily News Staff • June 8, 2020
The Guilford factory that produces the nasal swabs that are sorely needed to control the coronavirus pandemic had to stall its production of the swabs all Friday, June 5 ahead of a visit by President Donald Trump, then throw away the swabs that were made during his tour, according to a report by USA Today.

GUILFORD — The Guilford factory that produces the nasal swabs that are sorely needed to control the coronavirus pandemic had to stall its production of the swabs all Friday, June 5 ahead of a visit by President Donald Trump, then throw away the swabs that were made during his tour, according to a report by USA Today.

It was not immediately clear how many swabs were produced during Trump’s tour Friday afternoon and would have to be thrown out, or why they could no longer be used. A company spokesperson told USA Today that they would have to be tossed, but she also said that the Maine factory only operated briefly on Friday, when Trump arrived shortly before 4 p.m.

In video and photos taken at the Friday event, Trump could be seen walking around the Puritan factory without a face covering and addressing workers who wore masks and other protective gear. At one point, he held one of the company’s testing swabs near his face.

When the Bangor Daily News attempted to confirm whether the swabs were thrown out, Puritan co-owner and executive vice president of global sales Timothy Templet replied, “What do you think?” He refused to confirm or deny the report.

The White House did not respond to USA Today’s report or immediately respond to a query from the Bangor Daily News.

Testing swabs have grown critically important during the coronavirus crisis, since they are necessary to collect samples from people’s noses that can be tested for COVID-19, the disease caused by the virus. A shortage of swabs and other supplies is among the reasons that health care providers have not been able to conduct as much testing for the virus as experts have recommended.

Earlier last week, Timothy Templet declined to share many details about the president’s upcoming visit, but he said the company’s staffing on Friday would be close to its normal levels. However, Virginia Templet, his daughter and a marketing manager for the family-owned company, told USA Today that the plant would only be making swabs when Trump was present.

“The running of the factory machines is very limited today and will only occur when the president is touring the facility floor,” Virginia Templet said. “Swabs produced during that time will be discarded.”

On Monday, U.S. Sen. Angus King of Maine said during an interview with MSNBC that he disagreed with Trump’s decision to not wear a mask during his tour of Puritan.

“Masks not only will control the pandemic, but it’s also a matter of personal responsibility. You shouldn’t be spreading it yourself. That’s the danger. You’re endangering other people,” King said. Referring to video taken of Trump’s tour, King added, “You see the shots: everybody else has a mask on. It’s a terrible disservice to the country to have made wearing a mask some kind of a political statement.”

The U.S. Department of Defense has awarded Puritan a $75.5 million contract to expand its production of testing swabs at a new factory in Pittsfield.

That will help it more than double its current monthly production of a particular type of foam swab that can test for COVID-19. The company now produces about 20 million per month of that type of swab in Guilford.

It also produces roughly 4.5 million per week — or 18 million a month — of another type of swab used to test for the coronavirus, Timothy Templet said in May. Those so-called flocked swabs are long, thin and covered in small fibers that are especially effective at collecting samples.

In total, the company makes more than 1,200 different types of swabs and collection devices, and it normally produces over 12 million swabs per day, according to a company blog post in April. The company had about 300 workers in March and has since hired at least 80 more staff.

It plans to hire 150 workers for its new Pittsfield facility, which is slated to open in July.