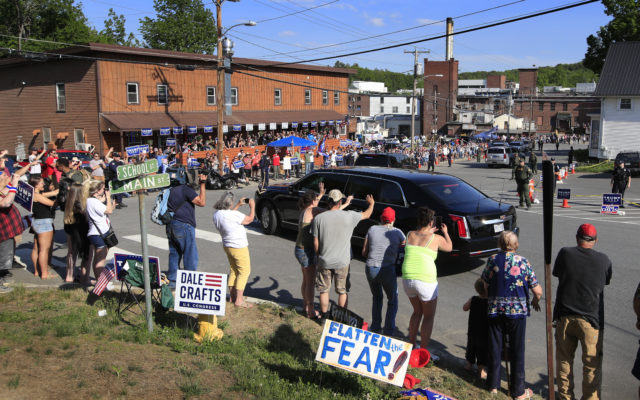 Charles Eichacker, Bangor Daily News Staff • June 6, 2020
The anticipation that built all week in this quiet manufacturing town quickly dissipated Friday afternoon, June 5 after President Donald Trump’s motorcade passed through downtown, where hundreds of supporters and protesters lined up throughout the day.

GUILFORD — The anticipation that built all week in this quiet manufacturing town quickly dissipated Friday afternoon, June 5 after President Donald Trump’s motorcade passed through downtown, where hundreds of supporters and protesters lined up throughout the day.

Ahead of Trump’s visit to the Puritan Medical Products factory, located just a stone’s throw outside downtown, more than a thousand of his supporters seemed to arrive in the downtown throughout the day, hoisting signs that celebrated him and the nation’s police officers.

So few of them wore face coverings that it would have been easy to forget the country was still in the middle of a pandemic that has killed more than 100,000 Americans, if not for the reason Trump was coming: to visit a company that makes the medical swabs necessary to test for the coronavirus.

He flew into Bangor International Airport earlier in the day, attending a fishermen roundtable there before riding a helicopter to a high school sports field in Guilford where a motorcade took him the rest of the way to Puritan’s plant.

But there were also a couple hundred protesters who packed a normally sleepy downtown Guilford to remind the president of the issues that await him back in Washington, D.C.

In what was an unusual site for many residents of the rural, conservative region, the protestors chanted “Black Lives Matter” and “I can’t breathe,” which were some of the last words of George Floyd, the black man whose videotaped death at the hands of Minneapolis police officers has sparked ongoing national protests.

The Trump supporters responded with their own chants of “Four More Years,” “All Lives Matter” and “U.S.A.,” but aside from a few tense interactions, both sides remained peaceful.

Whatever their other differences, many of the people who came did agree that Puritan’s workers should be honored for working long hours to keep up with the new demand for their products to control the pandemic.

One of the first people out was Sheree Brown, a Trump supporter who collected signatures in front of the Red Maple Inn restaurant for a Republican Party effort to repeal ranked-choice voting. “I’m thrilled he’s coming, but I’m more thrilled for Puritan Medical Products,” she said.  “And it’s the president of the United States!”

Later in the morning, Mike and Pam Spardello of Kingfield stood among another group of Trump supporters who were listening to country music playing out of a Jeep Wrangler that had been parked across from King Cummings Park.

“He has been vilified since before he came down the escalator,” Mike said, referring to Trump’s 2015 announcement that he was running for president. “He has been fighting for the people who see through the lies.”

But even in rural Maine, there was evidence of the ongoing protests against racism and police violence that have consumed the country this past week. By 8:30 a.m., a small group of young women from Somerset County was already holding up anti-Trump signs to drivers passing by on Water Street.

Nia Irving, 21, of Fairfield, a graduate student back home for the summer, said she wanted to raise attention to the struggles of black people even though they don’t make up a large portion of Maine’s population.

“We don’t have a lot of black voices, but we wanted to use our privilege to come here and make a statement,” Irving said.

Later in the morning, Pam and Todd Chamberlain, a pair of retirees from Brewer, had camped out on the other side of the road in the shade of King Cummings Park. Pam wore a shirt supporting Joe Biden for president. Her husband, a U.S. Army veteran, said they had not originally planned to come, but decided to do so out of defiance after hearing reports that some Trump supporters planned to come to the event with weapons.

Organizers decided to hold another larger protest in Bangor on Friday in part to avoid a confrontation with the president’s supporters.

“I served 30 years,” Todd Chamberlain said. “I can’t stand what our commander-in-chief is saying about using the military to put down peaceful protests.”

There was a police presence in downtown Guilford throughout the day, starting with sheriff’s deputies from many Maine counties who were stationed there in the morning. In the afternoon, the Maine State Police and U.S. Border Patrol handled crowd control during Trump’s visit.

While it was barely possible to see the president when his limousine rolled through, at least some watchers could make out his hand and face as he waved at them from the back seat.

Heidi and Gary Sudsbury, as well as their 17-year-old son Connor, came from Dover-Foxcroft, the next town over, to watch the president. Their glimpse of him was fleeting, but it was enough.

“I wasn’t even expecting to get that much,” Heidi said.

Her son added, “How many people in a small town get to wave at the president?”