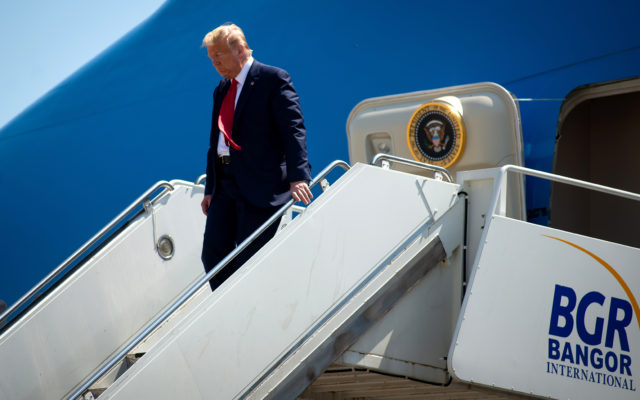 Jessica Piper, Caitlin Andrews and Michael Shepherd, Bangor Daily News Staff • June 6, 2020
President Donald Trump spent only a few hours in Maine on Friday, but the visit told us a lot about how he views it in the national political landscape and in light of the biggest issues facing his presidency.

President Donald Trump spent only a few hours in Maine on Friday, but the visit told us a lot about how he views it in the national political landscape and in light of the biggest issues facing his presidency.

The visit was one of four stops that Trump has made to manufacturers who create equipment critical to combating the coronavirus pandemic in recent weeks. The small town of Guilford in the heart of Maine’s more conservative 2nd Congressional District fits his politics perfectly.

The president attempted to tailor his message to Maine, which served as both an escape from the thorny, unprecedented political issues that endanger him in an election year. He also waded into state politics in ways both specific and vague that fit his strategy of activating his base.

Trump found an oasis in an area of the country uniquely affected by his executive actions. A security perimeter around the White House has expanded in recent days amid protests over the police killings of black men. Maine has seen its share of protests, including dozens of arrests in Portland earlier this week. Gov. Janet Mills had concerns that Trump’s presence could cause more security issues, but demonstrations by protesters concentrated in Bangor and supporters in Guilford were peaceful.

Piscataquis County, which has had just one confirmed coronavirus case, was a reprieve for Trump. In the most conservative part of a congressional district he won by 10 points in 2016, Trump could shift his focus away from the problems his administration has faced over the past few weeks toward ideas he has championed for years, such as American manufacturing.

In national polls, Trump’s approval rating on the virus response has stayed steady for weeks in the low 40s. But at Puritan Medical Products in Guilford, it was different. Like the president or not, he could draw a direct line between his administration’s act to send $75.5 million to Puritan to add jobs and bolster production of swabs needed to fight the virus and workers’ lives.

In an environment suited to his strengths and devoid of many of the issues that have most troubled his presidency, Trump was met with cheers.

Trump took one action and made vague vows on fisheries policy, but lacked command of details and drove at a political point. The president’s sole policy action of the day — an executive order opening the Northeast Canyons and Seamounts Marine National Monument southeast of Massachusetts to commercial fishing — was backed by regional fishing interests.

However, it is expected to affect relatively few Mainers and is likely to face legal challenges from environmentalists. Trump seemed mostly eager to blame his predecessor, emphasizing on several occasions that the monument was created under former President Barack Obama.

Commercial fishing interests expressed appreciation for the executive order while trying to inject their own concerns on several issues into a Trump-dominated conversation, including tariffs and regulations on fishing lines pursued by his administration to protect right whales.

On trade, Trump announced that former Gov. Paul LePage would lead a seafood trade task force. He threatened tariffs on automobiles — something he has floated in different contexts — if the European Union did not remove tariffs on lobsters, barking out an order to his trade adviser, Peter Navarro, to come up with a rate that was “an equivalent, plus” to the tariff on lobsters.

“Peter Navarro’s going to be the lobster king now,” the president said.

In response to concerns about the whale regulations — which have been the most high-profile issue for lobstermen over the past year with advocacy from all four members of Maine’s congressional delegation — Trump only promised to look into it, saying he was open to a solution so long as the whales were protected, too.

Trump told a panelist she was “so lucky” he was her president. She responded by outlining concerns about a pending vote by the New England Fishery Management Council that would require fishermen to carry monitors at their own expense, which for some would be too costly.

David Sullivan, a representative of the Maine Lobstering Union, said the attention Trump paid to his industry’s concerns were a good first step, saying action to address European tariffs would be “a big thing.” But he said the focus on the monument was misplaced.

Mills’ relationship with Trump is in the tank. LePage is primed to take advantage. It’s hard to see how either the president or Mills clearly benefit from a feud. Trump is trying to win areas he did not win in 2016 and the governor is dealing with legislative Republicans who want to strip her of her emergency power and Democrats quibbling with her virus response. On Thursday, her labor chief angered lawmakers of all stripes by no-showing at a hearing at Mills’ order.

The week began with a testy conversation between the two on a Monday call between Trump and governors. It ended in Maine with Trump likening Mills to a dictator on her virus response and the governor shooting back with a broadside statement saying Trump’s remarks were “largely devoid of fact and absent of reality.”

In Bangor, Trump was greeted not by the current governor but by LePage, a trusted ally who participated alongside the president in a roundtable with fishermen. It gave him yet another moment in the spotlight. The president’s “dictator” comment came after LePage brought the reopening of the state up in a diversion from the subject matter.

It comes as LePage says he intends to run against Mills in 2022. He told the Bangor Daily News on Sunday that he was “99.9 percent” certain that he would face her. The only way he would not, he said, is if he were “six feet under.” He may be helped most by any Trump-Mills feud.