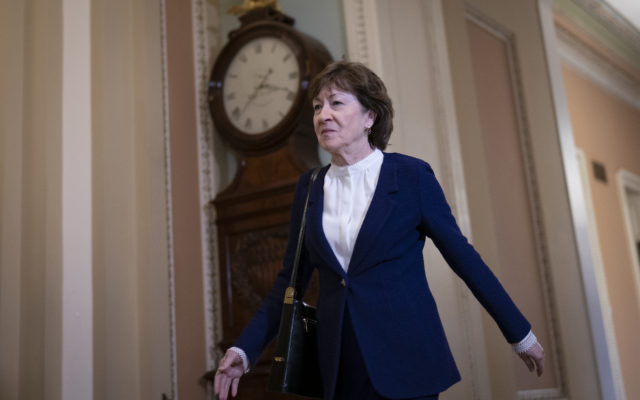 As Trump heads to Maine, Susan Collins won’t be there to greet him

Steve Mistler, Maine Public • June 5, 2020
President Trump will visit one of Maine's least populous towns and its most conservative county when he tours a factory producing medical swabs for coronavirus testing on Friday. Conspicuously absent during the trip will be the state's only Republican member of Congress, Sen. Susan Collins.

President Trump will visit one of Maine’s least populous towns and its most conservative county when he tours a factory producing medical swabs for coronavirus testing on Friday.

Conspicuously absent during the trip will be the state’s only Republican member of Congress, Sen. Susan Collins.

Collins, who faces a tough reelection fight to secure her fifth consecutive term, will remain in Washington, D.C., when the president travels to Puritan Medical Products in Guilford, Maine.

Earlier this week, Collins told Maine Public Radio that she’ll be working in Washington on Friday and that she’ll be holding a virtual fundraiser with South Dakota Republican Sen. John Thune in the afternoon.

Collins visited the Puritan Medical factory in May, but her decision to not tour alongside a president whose electoral fortunes could affect her own has drawn considerable scrutiny. Trump continues to face withering criticism for his handling of the coronavirus pandemic and for the ongoing protests over police violence against African Americans.

Collins has largely steered clear of commenting on Trump’s pandemic response, but did speak out this week as she joined others in criticizing the administration’s decision to use chemical irritants to forcefully clear peaceful protesters from a square in front of the White House so that the president could pose for pictures in front of a nearby church.

“It was painful to watch peaceful protesters be subjected to tear gas in order for the president to go across the street to a church I believe he’s attended only once,” Collins told reporters at the Capitol on Tuesday.

Trump took notice, citing Collins when he shared a column on Twitter from a conservative website that repeated White House claims that tear gas wasn’t used.

Collins had announced she would not attend the president’s visit to her home state before the uproar over his handling of the protests. But her decision continues to draw speculation as other self-identified moderates, including longtime ally Lisa Murkowski, R-Alaska, criticize Trump’s conduct.

On Thursday, Murkowski said she was not sure she can support Trump’s bid for re-election this year.

Collins’ centrist reputation has long carried her to resounding reelection victories even in years when Republican presidential candidates have lost, including the 2008 Democratic wave election.

But Trump’s presidency, along with controversial votes that Collins has made in support of his agenda, threatens that brand.

Liberal outside groups have repeatedly blasted her for her votes for the 2017 GOP tax law, as well as her vote to confirm U.S. Supreme Court Judge Brett Kavanaugh. While Collins declared Trump unfit for the presidency before the 2016 election, she has been criticized by those on the left for not doing enough to speak out against him. Meanwhile, staunch Republicans and the president’s most ardent supporters view her suspiciously despite endorsements from conservative firebrands like former Maine Gov. Paul LePage.

Prior to the Trump presidency, Collins enjoyed high favorability ratings. But earlier this year, a survey from Morning Consult pegged her as the most unpopular senator in the country, surpassing Senate Majority Leader Mitch McConnell.

While there has been little independent polling of the Maine U.S. Senate race, but there are many indications that Collins is in a tight race with Sara Gideon, the Maine House speaker who is considered the front-runner for the Democratic nomination.

Senate Democrats are hoping to win the chamber this November by winning four to five GOP-held seats. Collins’ is one of at least nine seats Democrats are targeting.

The president’s visit to Maine may not help Collins’ chances, regardless of her decision to not attend.

In a conference call with the nation’s governors on Monday, Maine Gov. Janet Mills told the president that his presence in the state could further inflame tensions that have led to demonstrations in two of the state’s largest cities.

The president, who swiped a single electoral vote in Maine’s 2nd Congressional District in 2016, was not persuaded.

He told Mills that he expected a “tremendous” crowd when he arrives at Bangor International Airport Friday afternoon.

Demonstrations against the president — and in support — are expected.