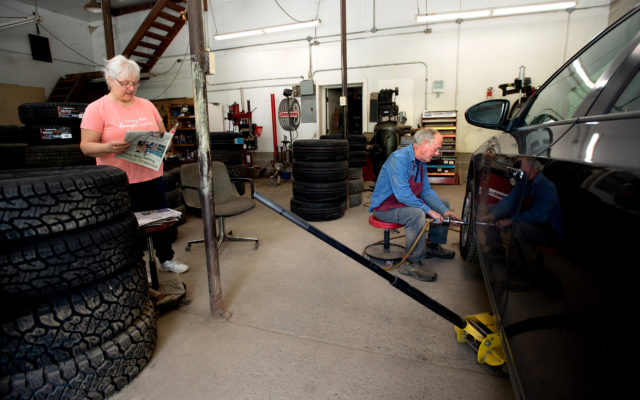 A town where manufacturing still matters prepares for the presidential spotlight

Charles Eichacker, Bangor Daily News Staff • June 5, 2020
All eyes will be on Guilford on Friday, June 5 when President Donald Trump flies up from Washington, D.C., to visit the town of 1,500 people. He’ll be touring the local plant where Puritan Medical Products has been cranking out the medical testing swabs that have grown critically important during the coronavirus pandemic.

GUILFORD — In the 40 years that Paul Herrick has run his own tire shop on Route 6, he has learned the perks and perils of working in a manufacturing town.

He lost regular customers when Pride Manufacturing, a maker of wooden golf tees, moved jobs out of Guilford over the years and when Moosehead Manufacturing closed its furniture plant in neighboring Dover-Foxcroft.

Now 76 and with no immediate plans to retire, he distinctly remembers one dislocated worker stopping by his shop to buy a new set of tires before moving out of state.

But the Guilford native has also benefited from the ongoing success of Puritan Medical Products, a local plant where his 71-year-old wife Gloria, an Old Town native, worked until her retirement a few years ago and where their two sons still work in the machine shop.

He has serviced some of the company’s vehicles, and when a fire destroyed the Herricks’ home in the fall of 1976, many of Gloria’s colleagues contributed to a fundraiser to help them make the down payment on a new one.

“I still marvel at that,” Gloria said on Thursday afternoon, June 4 after dropping off the mail at her husband’s shop.

All eyes will be on Guilford on Friday, June 5 when President Donald Trump flies up from Washington, D.C., to visit the town of 1,500 people. He’ll be touring the local plant where Puritan Medical Products has been cranking out the medical testing swabs that have grown critically important during the coronavirus pandemic.

For Trump, it will take him out of Washington, which has been dominated by protests in the wake of the killing of George Floyd at the hands of four Minneapolis police officers. And it will take him to a rural county with only one documented case so far of the coronavirus, the highly contagious respiratory infection that has killed more than 100,000 people throughout the U.S.

For Guilford, it’s a big moment that will draw attention to the outsize role that manufacturing still plays in one of Maine’s oldest, poorest and most politically conservative regions.

Some of the area’s factories have shed jobs over the years, but about a fifth of Piscataquis County workers, 1,292, were employed in manufacturing late last year, according to federal data collected by Eastern Maine Development Corp. More than half of them, 703, worked at a pair of Guilford companies that are the county’s top-two employers.

Those numbers have not offset some bleaker trends. In 2018, Piscataquis County had the state’s highest median age, 51, and lowest median household income, $39,470, according to the most recent U.S. Census data.

Guilford now regularly records more deaths than births each year, and enrollment in Maine School Administrative District 4 — the local district that also includes the smaller towns of Abbot, Cambridge, Parkman, Sangerville and Wellington — has dropped by almost 200 in the last decade.

The smaller of the town’s manufacturers is Duvaltex U.S., the subsidiary of a Quebec company that bought the local textile plant in 2016. At its height, that plant used to employ about 900 people, but it has shed many of those jobs as the operation has passed between different owners, according to Selectman William “Bill” Thompson. He estimated it now has about 250 employees.

The larger of the town’s employers, Puritan’s family-owned parent company, Hardwood Products Company LP, is a particular bright spot for the region.

It is still growing and working to add at least 150 more jobs at a new plant in Pittsfield with $75.5 million in funding from the federal government. Hardwood Products, which also makes materials such as toothpicks and popsicle sticks, employed about 550 workers as of earlier this year. Its Puritan division now has about 380 employees after ramping up hiring during the pandemic.

Rep. Paul Stearns, a Guilford Republican and former superintendent of SAD 4, said that the two manufacturing operations in town have stayed sustainable in part by investing in new technology and diversifying their product lines.

“One of the keys of Duvaltex and Hardwood Products has been their ability to pivot with the times,” he said.

Stearns also said that the plants have helped indirectly generate many supporting jobs in the region, and he expressed hope that the president would use his visit to recognize the workers at Puritan who have put in long hours there in recent months.

Anticipation of Trump’s visit seemed to be building around town, where a number of homes had his campaign signs in their yards on Thursday.

At her husband’s tire shop, Gloria Herrick couldn’t contain her excitement. Her sons have been working to craft the machines that will be used in Puritan’s new Pittsfield factory, she said, and she plans to cheer on the president as he pulls up to the factory.

Trey Gilbert, the vice president and plant manager at Herring Brothers Meats, a bustling slaughterhouse and butcher shop just up the road, said that many of the workers at his business have family members employed by Puritan.

His business has also recently been working with the company to help it develop swabs that can test for foodborne illnesses such as listeria.

“It’s good to get Puritan on the map and give them some attention,” he said.