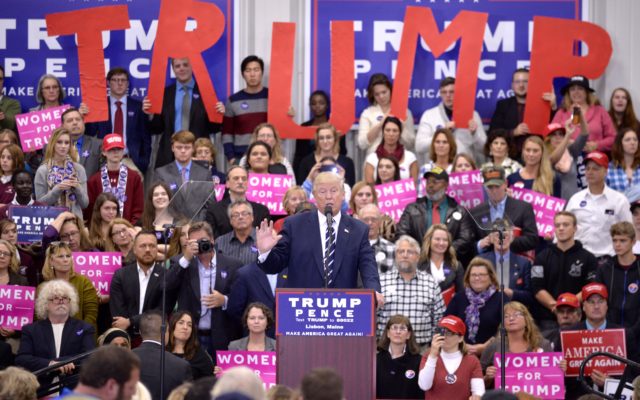 Trump’s Maine visit will likely be expensive and complicated

Maine police agencies are planning for President Donald Trump’s planned Friday visit to a medical swab manufacturer that could involve a complex and costly transfer from the Bangor airport to the Piscataquis County town roughly 45 miles away.

The president’s trip seems to have been quickly arranged. Gov. Janet Mills said she learned about it on Sunday. It was confirmed by the White House on Monday after an exchange between the president and Mills leaked from a testy call with governors over the response to protests across the country.

The event is likely to pull large amounts of law enforcement officers from their regular duties to help protect Trump and his route. A protest scheduled outside the event could pose more security challenges.

Details of the trip have not been confirmed. Trump is likely to land Air Force One at the Bangor International Airport on Friday, though an airport spokeswoman said she could not confirm that. The president could then travel to Guilford by motorcade or Marine One, his helicopter.

Kathie Summers-Grice, a Republican operative who helped plan roughly two dozen visits to Maine by former President George W. Bush while she was working in his administration or on associated campaigns, said she would bet on a helicopter because the state roads to Guilford would be “a long way with too many choke points along the way.”

She had never worked on a presidential visit to Maine with such a long transfer from airport to event, but said it would “suck up a lot of community resources” no matter how it happened.

The Secret Service may have to establish command posts in Bangor and Guilford to manage logistics, she said. There are then the costs of getting all vehicles and necessary aircraft to Maine while coordinating with local officials.

“It makes it very tricky because you’re going to have to secure that route and that takes a lot of time and resources,” Summers-Grice said.

Four trips by Trump to his Mar-a-Lago resort in Florida over the course of just over a month in 2017 cost federal agencies $13.6 million, according to a review last year by the nonpartisan Government Accountability Office. Most went toward operating government aircraft and boats with $3 million to supporting expenses including transportation, lodging and meals.

The Secret Service and White House perform days and sometimes weeks of security and logistics work to prepare a location for the president’s arrival. Maine State Police spokesperson Stephen McCausland said the agency began planning for the trip on Monday. He would not say how many troopers will be involved in the event.

The White House did not answer logistical questions on Tuesday and a spokesman for Puritan Medical Products, the host of the event and one of the two largest worldwide manufacturers of medical swabs used to test for the coronavirus, did not respond to a request for comment. There were no signs of an increased security presence at the facility on Tuesday morning.

Piscataquis County Sheriff Bob Young, who is coordinating the local and county law enforcement response, said he is coordinating with Penobscot County and 14 of the state’s 16 sheriffs have agreed to send deputies to help out. Route planning and itineraries will be coordinated by the Secret Service, Young said.

The federal government does not reimburse local agencies for helping the Secret Service protect the president as a rule. Congress set aside $61 million in 2017 to reimburse New York City and Palm Beach, Florida — where Trump has homes — for frequent security expenses.

That could cause grief for responding agencies. Piscataquis County manager Michael Williams said commissioners “don’t like to see a lot of fluff in the budget” and try to be conservative.

The announcement of the president’s visit to Guilford came amid growing unrest in Maine and nationwide after the police killing of George Floyd, a black man in Minneapolis. A rally in Portland on Monday night led to 23 arrests after weekend protests remained peaceful.

Organizers are planning a Black Lives Matter rally in Guilford corresponding with the Friday visit. Young, the sheriff, wrote on Facebook that he planned to protect the right to assemble while asking protesters and anyone opposed to them to remain peaceful.

Dover-Foxcroft Police Chief Ryan Reardon said reports on social media of people coming from out of town or outside the state could ratchet up stress on police and the small town where only certain officers are trained to handle protests.

“You wouldn’t throw someone into a situation they’re not prepared to handle,” he said.