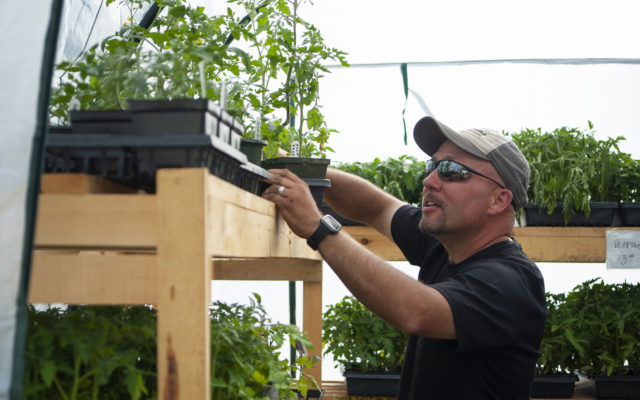 From snow to sun, garden center works to keep up with heightened demand

Ernie Clark, Bangor Daily News Staff • May 30, 2020
Barely three weeks ago Matt Tibbetts awoke to the biggest snowstorm of the year in southern Piscataquis County. The weighty and wet dose of frozen precipitation left him and other homeowners in the area with considerable storm carnage to clear -- particularly broken branches from virtually every tree in every yard.

Barely three weeks ago Matt Tibbetts awoke to the biggest snowstorm of the year in southern Piscataquis County.

The weighty and wet dose of frozen precipitation left him and other homeowners in the area with considerable storm carnage to clear — particularly broken branches from virtually every tree in every yard.

Tibbetts, manager and co-owner of Bob’s Hardware, Home and Garden Center in Dover-Foxcroft, also had the immediate future to consider as he cleared his yard of the last remnants of winter.

“On May 9 we’re prepping for Mother’s Day weekend when there’s hanging baskets and flowers and delicate items, and to have a foot of snow land on top of everything definitely set everything back,” he said.

Mother’s Day wasn’t the only reason shoppers flocked to the garden center as the snow melted.

In this year of the COVID-19 pandemic and food insecurity, vegetable seedlings and other gardening inventories have become an endangered species.

“The day after it snowed we had two greenhouses set up out of our seven, and I was shaking the snow off the top of them and digging out tomato plants and selling them right in the [aftermath] of a snowstorm,” Tibbetts said.

“Our normal schedule of bringing vegetables in is the week after Mother’s Day, but this was before Mother’s Day and we were selling already.”

That run on all things garden-related has continued unabated since then, spurred by fears of  food shortages at the retail level in the wake of the coronavirus.

“From somebody putting a shovel in the dirt to the truck that brings food to the store, there’s so many facets to it, but we’re so ingrained in thinking, ‘I’ll just go to the grocery store and pick it up,’” Tibbetts said. “Now everybody’s seeing that it’s not necessarily on the grocery store shelf, so now people are thinking, ‘Well I ought to try to do something myself at least to have something to get through the fall or the winter.’”

Among the stock that sold heavily early on at Bob’s were such basics as seed potatoes and onion sets.

“Due to the COVID-19 pandemic the demand just stayed extremely high,” Tibbetts said. “People were scared that due to the food shortage and other things that this year they weren’t going to get their plants.

“If it wasn’t tied to the ground they were buying it.”

The Lincoln Street business also has had to be vigilant to keep pace with a wholesale supply chain challenged by extreme demand.

“We were stocking [early] only because we were told by our suppliers that they were already selling in large quantities,” Tibbetts said. “We were afraid our suppliers were literally going to sell out the week after Mother’s Day.”

Tibbetts said the tight market for seedlings and other gardening supplies reflects in part a surge of first-time gardeners.

“People can’t really horde vegetable seedlings, but at the same time there’s been a mass amount of more people planting,” he said. “There’s a lot of new gardeners and a lot of folks that, whether it be raised beds, are using the newer forms of gardening,

“People aren’t planting acres, but there’s a lot more people putting something in a pot on their decks.”

Tibbetts laments one aspect of this particularly busy month on the job — not having as much of a chance to teach customers some of the finer points of gardening. It’s an added benefit he believes separates Bob’s from big-box competitors.

“When somebody kills something off because they put it out too early in the frost … We aren’t going to tell somebody to put something in the ground if it’s not time yet,” he said. “We’re going to tell you to hold on and wait and use the proper techniques to keep them inside.”

As the summerlike heat of late May arrived, Tibbetts expected the busy times to continue at Bob’s garden center — at least for now.

“Let’s put it this way — we’ll sell out this weekend I hope,” he said. “Seriously, that’s where we’re at. Other greenhouses locally are shut down already, and we’ve purchased about what we can get.”