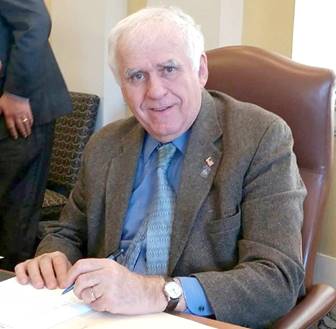 Raising the gas tax is a horrible idea

Sen. Paul Davis, R-Sangerville • December 18, 2019
Maine’s new state budget includes $2.7 billion more in spending than the previous two-year budget. This is a 16 percent hike in spending, a growth rate of more than three times the rate of inflation. Somehow, in this explosion of spending, this budget neglects to pay for the most fundamental of things that state government is supposed to take care of -- our roads and bridges.

Maine’s new state budget includes $2.7 billion more in spending than the previous two-year budget. This is a 16 percent hike in spending, a growth rate of more than three times the rate of inflation.

Somehow, in this explosion of spending, this budget neglects to pay for the most fundamental of things that state government is supposed to take care of — our roads and bridges.

Over the last eight years, Maine’s state budget has generated surpluses totaling more than three quarters of a billion dollars. Yet we still have not paid for roads and bridges.

So far this year, revenue forecasts show at least another $75 million will be available. Yet we still have not paid for roads and bridges.

Last month voters authorized a $105 million bond to fund transportation infrastructure. Yet we still have not paid enough for roads and bridges.

Having spent every penny of taxpayer funds available, then borrowed more than a hundred million more, there are some who now favor raising the gas tax to pay for roads and bridges. There are many bad ideas that surface in Augusta at exactly the wrong time, but this must be the worst one I have ever seen.

Raising taxes, as a rule, is a bad idea. It takes money away from taxpayers, slows the economy, and puts too much money in the hands of state government, where it usually gets spent inefficiently. Raising taxes when the state is collecting and spending more money than it ever has before is an insult to the taxpayers.

According to the Department of Transportation, in addition to the $105 million bond, Maine needs $160 million more in state funding to bring our transportation system up to a proper standard by the end of this budget cycle. At the same time, they say that a one-cent increase in the gas tax will generate $7.5 million.

According to the U.S. Department of Energy, Maine currently ranks 19th among states in the amount of its gasoline tax. An increase of 5.5 cents would move Maine into the top ten nationally, but it would raise just 18 percent of the revenue needed.

Maine people are already among the most taxed in the nation and raising the gas tax affects everyone. Not just those who drive, but everyone who buys and consumes anything that travels across Maine to reach us. Whether it comes via FedEx, UPS, the U.S. Postal Service or a shipping truck bringing goods to stock some box store’s shelves, it travels our roads and costs more whenever taxes go up.

The people hurt the most by a gas tax hike are the poorest among us who live in the most rural areas. Those of us who can’t afford the latest energy efficient hybrid automobile and have to drive long distances between affordable housing and a decent job suffer disproportionately.

The latest state budget will spend just about $20 billion over a two-year period. That is far more spending than ever before. The fact that this budget could not find a place to properly fund one of our most important priorities says a lot about the budget process and the obvious shift in Augusta away from fiscal responsibility.